A strange cosmic event has caused a rapid evolution in ants, with the little formicidae (I looked that up) beginning a process of killing their natural enemies and taking over the Earth. And, wouldn’t you know, one species on their kill list happens to be of the two legged relatively hairless variety.

While it’s true that Saul Bass proved his creative genius with the brilliant title design on a ton of enduring classics, such as that iconic expressionistic outline of an arm destroyed by heroin-needles for Otto Preminger’s The Man With the Golden Arm and the penetrating lines slashing through each opening title of Hitchcock’s Psycho (merging perfectly with Bernard Herman’s so-classic-its-been-seared-into-the-popular-zeitgeist suspense-driven strings), as well as apparently having been a main cog behind the shooting of that same film’s seminal shower scene murder by having meticulously storyboarded each unforgettable shot, it’s still a whole other step to have imagined he could have picked up the reigns as director and proven himself so capable with this quirky, enigmatic and fascinating film.

From the opening imagery, with one of our two main scientists, Lesko (Michael Murphy), recounting (over macro-cosmic imagery and then powerful micro-photography of ants attacking and devouring prey) the events that have led to both scientists (with a cold obstinate Nigel Davenport playing the more aged veteran) mostly holed up alone in a chemical weapons lab in the middle of the harsh Arizona desert exploring the odd, seemingly solar monolithic slabs constructed by the ants, with all of it accompanied by a profound deeply evocative electronic underscore, then followed by an out of focus truck, with a large swath of desert sand kicking up behind, slowly approaching, an immediate air of vastness — a profound sense of unknowability — is established and is retained throughout the film. Perhaps it was Bass’ discomfort at working with the actors (I’ve read the thesps did not enjoy their experience with him, saying, at best, he wasn’t much of “an actor’s director”) that led to these cold, almost emotionless performances (by the two leads as well as the beautiful chubby-faced angelic young Lynne Frederick who ends up stuck with them after they have mistakenly killed her family in a chemical attack against the ants, with mostly only clinical responses by the scientists after they realize what they’ve done), but, however they were created, they work sublimely within the clinical, philosophical sci-fi approach of the film… and also allow the ants that much more room to become equal characters.

Watching individual hive ants, through microphotography doing things you almost can’t believe you’re seeing, such as, for instance, carry a piece of the poisonous ‘yellow chemical’ rained down on them by the scientists (killing most of them) through their underground tunnels, one at a time (as each ant dies, another picks it up and carries it until it then dies from exposure, then the next and the next) all the way to the large queen, who ingests it, then gives birth to new evolutionary-progressed yellow chemical-resistant ants, is just one of the number of jaw-dropping scenes where it feels almost like the tiny little critters are giving performances.

While the film certainly falls into the ‘Nature gone amuck’ genre popular in the 70’s, and does have some sensationalistic exploitation elements (such as the ants attacking the Frederick’s family and the family horse causing fires and car accidents, some gruesome imagery like burrowing ants crawling out of a dead human hand, and the Davenport scientist being bitten by an ant leading him to trudge around a grotesque hand straight out of the fungus effect of the early Hammer Doctor Quatermass blob film The Creeping Unknown), but it’s the high brow approach, and true philosophical (and sci-fi) sensibility, that separates it from the rest of its fun, more determinedly low brow brethren… and I’m sure is the very thing that befuddled the studio and led to it being a box office failure… and Bass’ only directorial credit. The original theatrical poster itself, with an ant burrowing into a bloody hand and the screaming exploitation movie headlines, putting aside my deep affection for it, underlines the studio’s lack of vision in how to properly market the film. They decided to disingenuously present it as a Kingdom of the Spiders killer insects chills-and-thrills ride, with nary a hint at the more thoughtful, adult and existential experience the film actually provides. 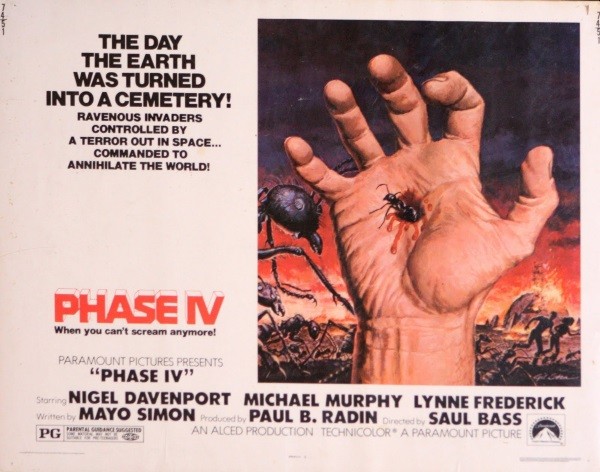 Fortunately, I saw it with the original entirely tripped-out, hallucinatory ending included (that the bemused studio had cut from the final theatrical release) that enigmatically speaks to a new evolution in humankind (as much as ant-kind). With its vague and fascinating allusions of a shared space of man with ant (and with nature itself) against a backdrop of massive labyrinthian structures (where it appears man is both imprisoned and is an equal), hinting also as it does at the merging of human male and female, possibly into a parthenogenetic being (i.e., one who doesn’t reproduce sexually – not a word I would have immediately thought of, by the way, it just happened to be mentioned in Bruce LaBruce’s latest smart and hilarious fem- and trans-radical effort, The Misandrists, I saw last night at the FNC), it is ultimately much closer to me of what the ending ‘voyage’ sequence of –as much as I love the film– 2001: A Space Odyssey wanted to be, but didn’t quite achieve, as it relied on less intellectually-engaging (and consequently overlong) imagery such as the frame-filling close ups of the astronaut’s flicking eye and negative reverse printed footage. Again, with Phase IV, it’s also that ethereal quality to the score, simultaneously hinting at both low-brow pleasures and a high-brow intellectual searching, that brings the finale to another level.

Alas, while not surprisingly, a number of openly dismissive hipsters behind me (a vocal population, with a self-assurance seemingly growing in equal measure to their ignorance, of who I find at rep houses more and more, making me consider just leaving the cinema houses behind for good) found the time to openly mock the film. With the film’s intertitles throughout listing the various ‘Phases’ of the ant’s evolution (with the final movement being ‘Phase IV’), one particularly smug young poser waited for the final credits to loudly proclaim he wished there had a been a ‘Phase V’ to explain what happened. Now the remark may not be without a modicum of (glib) cleverness, but far less than he realizes, as it revealed himself and his chortling mates, as is always the case, on an intellectual par as defined by the corporate studio heads who have managed to dumb them down and instill in them a Pavlovian response to dismiss and belittle anything that challenges them and requires them to think (and expand). In fact, their reactions reveal just how vastly intellectually superior the film, and Saul Bass’ vision, are.