Six fictional segments, each by a noted French filmmaker highlighting a particular Paris arrondisement, manages to provide a view of the city from all different narrative angles (though unified through a shared 16mm French New Wave, quasi-documentary aesthetic).

In looking at the names attached, while at the same time contemplating how many French kids seem to be named ‘Jean’ (the country might consider thinking outside the box a bit with the whole naming their children thing), I also realized I was only familiar with the obvious Big Three of the Nouvelle Vague directors (Rohmer, Godard and Chabrol). I had never even heard of Jean Rouch, who the entire CQ series is about that “Paris vu par” is included in, and I’ve since learned he was arguably the first champion of cinéma vérité, a style he plays out poignantly and resonantly in his 15 minute episode, which consists of a mostly continuous, limited series of takes capturing first a domestic squabble revealing marital dissatisfaction with the wife rushing out, to an incident on the industrial and intrusive Gare du Nord street with an emphatically interested man that leads to the wife having an opportunity to re-assess her life (did I mention this was a French film?). It was interesting to see a very young Barbet Schroeder not only acting as the husband in the piece but being listed as the overall producer of the entire film (leading me to discover that Schroeder, along with eventually becoming the noted mainstream American filmmaker I knew of, also produced a slew of French New Wave films, including many of Rohmer’s important works). 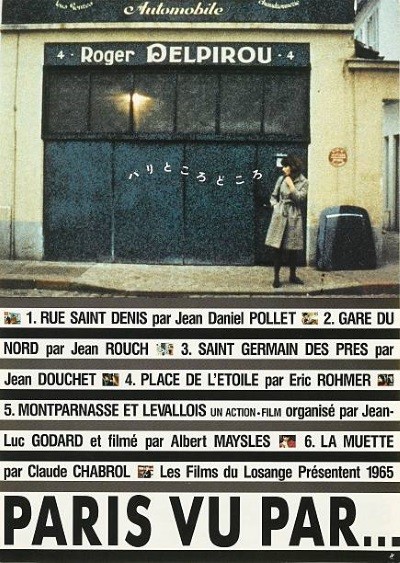 The Pollet segment about a prostitute with her john in a run-down Rue Saint-Denis hotel room is the most overtly amusing, with the humor coming out of their dialogue and their painful situation (while offering little nuggets of wisdom along the way) and the Chabrol segment is the most visually striking (not surprising considering the director’s well noted Hitchcock-inspired bent) and darkly intriguing, a typical (for Chabrol) cold view of the empty pettiness of Paris’ rich bourgeoisie, as seen through the eyes of the emotionally neglected boy who takes to wearing ear plugs so as not to acknowledge his unaware parents’ dismissive cruelty. The Douchet and Godard segments are very different in their narratives, yet align quite closely in style and in their clever and amusing perspectives on the fickle natures and easy betrayals of youthful sexual relationships (I said it was a French film).

Finally (though I’m mentioning these all out of order so it wasn’t the last one presented), Éric Rohmer’s entry, which ends up being sort of a stretch outside of the bounds of his usual dramatic relationship explorations (at least from what I know of his French New Wave work at that time) towards something approaching the more cerebral suspense of his peer Chabrol, with this one concerning a businessman whose simple, comfortably repetitive life is turned upside down after he believes he might have killed a drunk after an altercation on his way to work at the Place de l‘Étoile (that’s Place Charles de Gaulle to me!). It’s far less ice cold than Chabrol’s effort (and a bit less resonant) as it’s more fanciful and even has a bit of black humor with the stressed out businessman’s reactions to the sensational reports of the poor drunken man left for dead, but it’s overall another nice entry.

Each of the six segments ends up a different treat in the best ‘short tale’ way, providing a nice Parisian morsel to consider afterwards. It all adds up to a cohesive and satisfying meal that is rarely achieved in these kind of anthologies, even with such accomplished filmmakers on board.