Rachel (listening to the haunting melancholic sounds of our titular whale through a hydrophone):

What is he saying?

And so plays out the dance of tragedy between the flawed fisherman who lost his family in a tragic accident that he blames himself for and the vengeance-hearted whale whose family the fisherman has killed.

Richard Harris’ opportunistic fisherman Captain Nolan harpoons and drags aboard a beautiful orca, only to discover, as he hangs the still thrashing creature up, that the she was pregnant, with the now-dead foetus falling horribly to the deck, which the Captain, trying to deny the revulsion he feels at what he’s done, immediately washes overboard, not realizing the female’s mate, and the titular creature of the narrative, is watching helplessly from the waters, planning his vengeance against this Ahab-like figure who has destroyed his family…

The Jaws rip-off phenomena that followed the success of that great shark movie we all know and love usually derive from one of two exploitation-minded camps – either the low budget somewhat tongue-in-cheek American indie zone, like Joe Dante’s highly spirited Piranha, or the far more serious (or attempted serious, anyway) generally kinda silly, if entertaining, spaghetti variety, such as Enzo Castellari’s no-fooling-around straight-ahead “Jaws” rip-off The Last Shark … but the decently-budgeted Orca doesn’t quite come from either place. Produced by one of the most famed Italian producers of all time, Dino De Laurentiis (so I guess there are some connections to the land of spaghetti and crime), his intentions with his knock-off were clearly much grander (fairly standard practice for the great Dino, a legendary showman of epic proportions, one with the chutzpah to occasionally realize his always large visions). I mean Orca is a ‘monster fish on the rampage’ movie, sure (and a pretty exciting one at that), but wow does it ever aim for all sorts of Shakespearian heights, with nice resonances to the grand-daddiest of all whale epics Moby Dick.

It’s the usual consensus on the poor audience reception to Orca being about its similarities to Jaws and I say that’s wrong. It’s much more likely the audience went in expecting the simple, perhaps almost laugh-worthy, visceral pleasures of a rip-off of Spielberg’s great shark movie, but ended up confused by an entirely different – and emotionally resonant — experience. Certainly Orca has a similar template to its forerunner – with our orca (I’ll just call him Orca with no possessive from now on to make it easier) besieging the fishing town in the first hour (with some really rad scenes, I might add, including violent attacks against individual members of the Captain’s crew, one in which he not only destroys a house on the water, but rips off the leg off a very young Bo Derek, as well as some excitingly executed ones in which our rampaging whale destroys the entire fleet of boats in the harbor of the small fishing village – except, no surprise, Captain Nolan’s) then, having coerced his prey out into the waters to confront him, the last thirty minutes becomes an exciting adventure in sea (with the added inspired burst of personal vendetta between man and beast) – but its execution is a very different animal (no pun intended) – Orca is haunting and poetic, and beautifully shot. Where Jaws is family entertainment (and I mean no disparagement, as I consider Jaws one of the great films of all time), Orca is decidedly, dare I say, more adult in nature. It’s about loss and grief, expressed through tragedy. 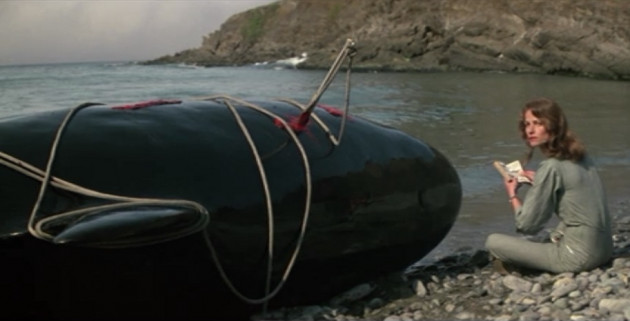 There is no mindless monster fish eating-machine here.. and no real catharsis achieved by the end (no audience celebrating line of “Smile, you son of a…. !” as the shark explodes at the end of Jaws What is achieved is, amazingly, surprisingly, a sublime sense of melancholy.

Of course, the idea of a killer whale seeking vengeance is wonky (though not any more than the shark in Jaws being constantly found at sea, following Quint’s boat, destroying it, etc.), but it works as fable. I’d argue its differences from Jaws are its strength — where the shark is a cold faceless monster, Orca is the put-upon monster who we feel a tremendous compassion for… and, what’s even more interesting, is that the ‘villain’, Captain Nolan, is also a tragic figure (struggling with past destructive actions in his own life that align him emotionally with the whale, even as they are antagonists).

It’s always helpful to have great actors aboard, like Harris as the haunted Captain and the amazing Charlotte Rampling (that once high-end model who – something us cinephiles should be eternally thankful for — turned to acting, projecting a near ethereal, yet somehow grounded at the same time, presence worthy of study in any film she’s in, and, man, she’s been in some big bold great ones… The Night Porter anyone?… which reminds me that I gotta get around to revisiting that film one of these days) who convincingly plays a whale scientist (or something like that… I guess she aligns a bit with the Hooper role) who are clearly giving their all. You get no sense whatsoever they feel their slumming… in fact, I’ve read somewhere that Harris eventually thought of this as one of his greatest roles and only lamented no one saw the original three hour cut that apparently focused even more on his performance… man, I would love to see that. 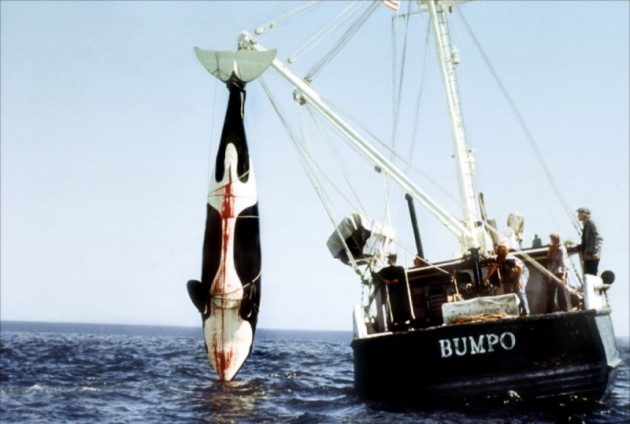 With the poignant dialogue, as well as lots of zooms and odd camera movements reminiscent more of European-style filmmaking, the effective attack scenes, some great use of actual killer whale footage mixed with some really well-done mechanics work and – last, but very far from least (in fact, it may be the numero uno element propelling the film beyond its genre trappings) – the profoundly resonant and gorgeous score from the late near-mythic composer Ennio Morricone, Orca is an art-house film wrapped in a genre tale that I fell in love as a teenager experiencing it on television back in those early days of pay cable… and am happy to discover to find it equally enthralling today.

Not only is Orca the best of the Jaws knock-offs, it’s a beautiful film in its own right. A dream would be to see this bad boy on the big screen, projected in a glorious 35mm print, with the Morricone score soaring, at one of my usual rep cinema haunts – hell, even as a midnight screening. I can’t quite understand why this heart-felt beautiful film hasn’t achieved the love and respect it deserves.