First, it was that damn mutant Davis baby, brought to us straight from the cautionary perspective (on big business polluting our lives) of Larry Cohen. Then it was a revisit with that seminal gooey shape-churning identity-stealer known only as the thing (I mean, what else would you call a form of pure abjection, other than… that… thing!), given to us by John Carpenter.

So now… since I’m on this current role of showing my daughter some of the greats brought to us by those golden age indie horror mavericks (and with Freddy’s Dead: The Final Nightmare coming up in 35mm 3D at the end of July at the Cinematheque!), might as well continue on, with another (only temporary, I keep promising her) side-track from our on-going chronological viewing of the epic, humanistic, thoughtful and wildly entertaining animated Japanese animated works that spurt like a creative well-spring from the brilliant mind of the eccentric Hayo Mizayaki, to a full introduction to her of that iconic child-molester returned from the dead — not in the flesh, of course, but in our darkest nightmares — in all his red-and-green striped sweater, burned face, bad pun and sharp-clawed glove glory, hot for revenge on the teenage children (including that very young and fresh-faced Johnny Depp, miles away from the troubled Keith Richards clone he’s become in recent years) of the parents who have struggled with the terrible secret of having burned him to death for his sins many a moon ago. 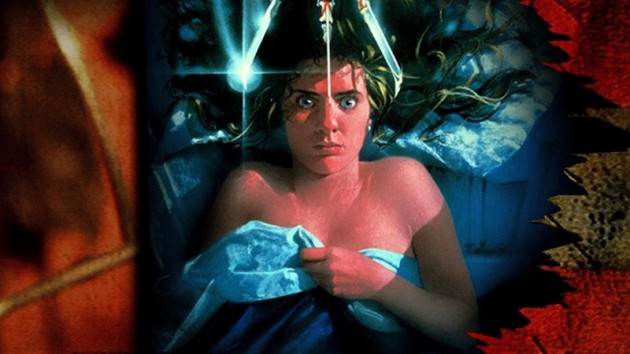 While Freddy Krueger (Robert Englund, in case you somehow forget) does wield the bad puns along with his razored glove in this first “Nightmare”, it was refreshing to be reminded how much less of those there was than in the sequels to follow, in which much of his murderously creative shenanigans (as well as the character himself) began turning more and more towards broader (and often groan inducing) sensational shtick, with much of the lean, savage – even mysterious — terror imagined by creator Wes Craven for his original Freddy dissipating in mounds of (sometimes extremely creative, mind you) rubbery effects and over-lit staging.

Krueger in the original “Nightmare”, as imagined by Craven, is a genuinely scary, shadowy figure. Of course, it’s Englund’s defining role, with his specific maniacal over-the-top glee as Krueger working as a serendipitous merging of actor with monster (and audience need) to create one of those rare modern classic figures of horror that burst out of the slasher film (with its focus on the teenagers, with the first dying just after having sex, it definitely hews fairly close to that genre, just with a head-and-tails-above inspired stalker figure) and managed to even transcend the horror genre (everyone knows who that burned figure who comes in nightmares wielding sarcasm along with death named Freddy is).

Yes, there’s Jason and Michael, but those silent killing machines never required performances to fill their shoes, just the costume and big, plodding stuntman (I’ve never been part of the cult of Kane Hodder, who only started to show up in the role of Jason when the “Friday the 13th” films were turning shitty anyway). Perhaps the closest is Doug Bradley as Pinhead, the head of those deadly otherworldly pain-is-pleasure demons with more than a hint of S&M leather and kink, the Cenobites, but he never came close to the level of success of Freddy (as amazing and memorable as that character remains to us horror aficionados, especially if you came of age during that time). Even Craven himself, trying as he did with pale lifeless re-tread characters as the returned-from-the-dead Horace Pinker in 1989’s truly bad Shocker couldn’t come close to replicating the success. 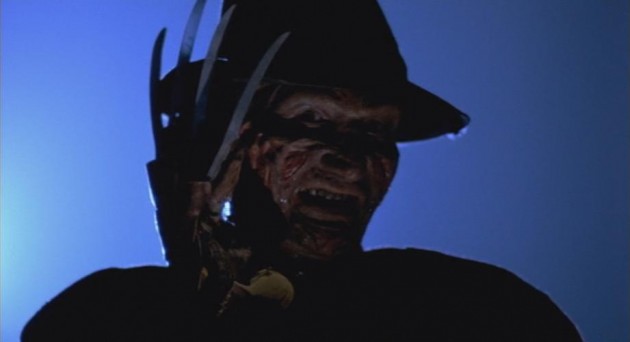 While adhering to the teens-in-peril formula common to that horror period, “Nightmare” does a clever job utilizing the “Psycho” narrative structure of leading the audience to believe a certain female character is going to be our lead (even letting her have a certain kind of dangerous sex – with resonances to the Janet Leigh character in Psycho)… before slaughtering her.

An aspect that Craven has excelled at throughout his horror film career (when he’s excelling, that is – he had a wildly inconsistent career and putting out some really bad films wasn’t exactly a rarity for him), in everything from the profoundly boundary-pushing elongated rape, humiliation and murder of the girls in Last House on the Left, to the opening brutal murder of the Drew Barrymore character (which remains powerful even with the silly wig she’s wearing for reasons that I’ve never understood) in his later massive franchise-opener Scream (a series I’m very partial towards and have on the agenda an eventual visit with the kiddo, if she remains interested, that is, in exploring these movies with dad during her upcoming full blown teen years where distractions are king – or queen, in more politically current terms), is an uncommon level of harrowing savagery in his violent set-piece (beyond just startling effects work).

Watching the girl rolling around impossibly on the walls, shrieking in agony, as her flesh is rent open by the unseen attacker from her nightmares, with her boyfriend, shocked out of his post-coital comfort, screaming and reaching helplessly for her (in a bit of extremely clever coordinating, he remains unmoving, moored to the floor, enhancing the eye-popping impossibility of her rolling onto walls and ceiling) is powerful, visceral stuff. It’s such an effective opening murder, I’d argue it might be just as much a reason for the overall success of the entire film as any other element (the Krueger character killing through nightmares, the impressive and wonderfully lit set design, the simple, deeply unsettling bits such as the contact recurrence of a dead Tina speaking in nightmares from a body bag). Craven would mine this concept again to great success with the resonance achieved with the aforementioned Barrymore character’s opening death in Scream later on.

This death scene, in fact, was only the second moment to this point where I questioned if my daughter might be a bit young for me to be showing it to her (the first was the deeply unsettling – and very powerful — scenes of knife disfigurement and violation in 1932’s perverse pre-code Bela Lugosi-starrer Murders in the Rue Morgue, which I turned off). This time, however, with Azia being a year older –first into her teen years — I could see she was riveted, connecting to that deliciously pleasurable experience of diving headlong into the taboo societally-unsavoury side that us horror nuts are drawn to like squirrels to a nut.

Even with the score delivering some really cheesy 80’s disco-style riffs during the more suspense-minded scenes of Nancy (Heather Lagenkamp, an actor who, while not capable of any particularly impressive range, found a nice little five minutes – that’s lasted a horror convention lifetime! — managing a level of rebellious intensity against both her divorced parents and the embodiment of her parents’ guilty secret, namely that ol’ child molesting high school janitor Freddy Krueger, that while not cinema-changing, is better than I remembered), the old classic horror tale underlying theme of repressed truths coming back to get us is crafted quite nicely. 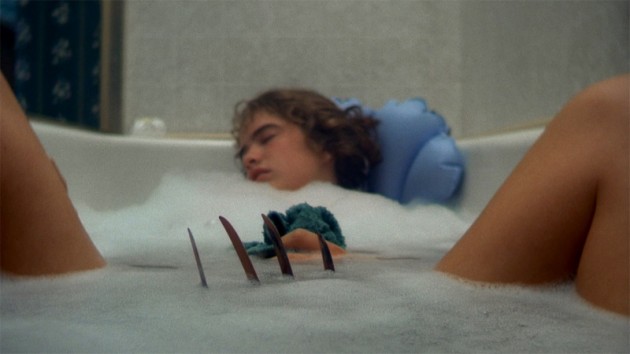 I never tire of seeing John Saxon show up (I mean, geez, with this guy – from Bava, to Argento, to Bob Clark, to Craven – and that’s all I can think of off the top of my head — he’s horror royalty!) and he’s perfect as Nancy’s caring, yet clueless, town sheriff father. I don’t know if I’ve ever seen Ronee Blakely in anything else, but in this one — as Nancy’s dysfunctional alcohol-soaked mother – with her over-the-top strangeness, she’s something, that’s for sure. It’s one of those examples where an odd (maybe even bad) performer elevates unaccountably into the realm of the unaccountably inspired.

It’s interesting to note, as is often the case in Craven’s work, the family unit (even better, the usually idealized suburban family unit herein) as not the place of safety and comfort, but of alcoholism, guilt and neglect – all the better to release monsters in, of course.

While I’m not quite sure how clear all the rules of going in and out of the nightmares are in the film (how are Langenkamp’s Nancy and Depp’s boyfriend seemingly deliberately sharing a dream space? Why is it that when he wakes up a few minutes later, she can’t be attacked anymore? For that matter, is Freddy real when they fall asleep — and kills his sleeping victim in the real world — or just in the nightmares?), the very ambiguity ends up successfully operating with a kind of mysterious and satisfying hypnotic dream-state logic, rather than being frustratingly convoluted (perfect case in point being the film’s final scene, ending as it does on a nightmare with – unlike the sensational one, say, at the ending of De Palma’s Carrie – no resolution or ‘return to normality’ from which to hang our logic hats — it makes no obvious sense, remaining entirely unclear on exactly how we’re supposed to take it – and yet, manages to operate deliciously on the level of a nightmare that we just know makes sense – and is speaking to us – but only on a deeper subconscious level we can’t quite reach).

The image of Freddy Krueger himself, matched up with the novel idea of having him attack us in nightmares, has to be considered Craven’s greatest creation. The lean, scary approach he employed – and the vivid and unsettling dream-world evocations created (with that image of Freddy’s claws seemingly ripping through the wall above the sleeping Nancy perhaps being my favourite of the entire series) — work fantastically. This “Nightmare” gave my slowly-becoming-a-horror-movie-vet daughter the only jump scares I’ve seen her have so far (three times, no less)… and I ascribe that not to the easy set-ups alone, but rather to the tension-filled and successfully engaging atmosphere captured that allowed these scares their maximum effectiveness.

While the deaths beyond the first one are captured in clever ways, none are as savagely harrowing as that first one, which is fine. That first one set the stage from which the dread hangs.