Finally found the happy time to delve back into another Milligan entry in the Severin box set with Nightbirds (though I realized after that I had messed up the chronology – I really should have watched Torture Garden before watching Nightbirds, with the latter being the first of his films made in London, where the filmmaker found some meager monies to keep churning out his little cinematic monstrosities for a year or so before, naturally enough for the volatile wild man, burning to the ground every available bridge and returning to the more familiar surroundings of Staten Island). 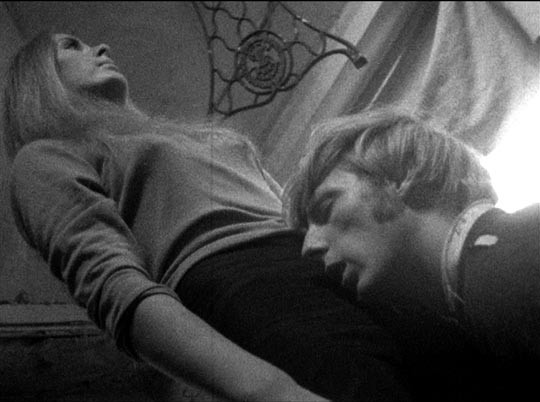 Shot in grainy black and white, set on the rough streets of that dour city’s East End, as the homeless Dink (Berwick Kalen), an awkward young man, is taken in by the mysterious Dee (Julie Shaw) to live with her in the rundown building attic she squats in leading to a relationship forming, one that starts out innocently enough before turning more weirdly possessive and dark, as each reveals more of their odd quirks and kinks (and I do mean kinks), while still obsessed with all those misanthropic Milligan themes on the destructiveness of human relationships (and I’m not talking about one or two, mind you, but every single one), the usually out-of-control (and I mean that in a good way) director surprisingly manages a more tempered hand, dialing back the usual histrionics to reveal a… dare I say it… maturing in his filmmaking.

In fact, the opening credit sequence, following the down-and-out Dink, hobbling sickly through the gray streets (with its modern day setting another interesting choice for Milligan, who usually likes his period settings – incredibly unconvincing period settings, that is, but charming nonetheless), with freeze frames announcing sudden experimental sound-shifts, had me immediately wondering whether I wasn’t about to watch an evolution from the filmmaker… and the rest of the film, with its background social milieu of urban economic plight, highlighting the emotional wreckage it creates, feeling like some kind of perversely twisted black sheep offshoot of the British Kitchen Sink films that were being celebrated at the time, verified it.

Not that I’m saying Milligan has any kind of evolved outlook on relationships or sex. No no, it’s all deeply conflicted, and hate filled, which is what makes the obsessiveness of his films so fascinating to watch (and Nightbirds a particularly powerful example, especially as to how relatively subdued it is compared to the usual Milligan mania). From the initially frigid Dink’s crudely flirtatious relationship with his older lonely female friend in front of Dee, to Dee’s unspoken power-play requirement of forcing the fragile Dink to go down on her (obviously the ultimate humiliation for the fairly openly misogynist, self-loathing homosexual filmmaker – and in the filmmaker’s mind, a red flag for showing how destructive and evil she will ultimately be exposed as, moving from false good Samaritan to evil Black Widow), the perversity is all right there on display, he just doesn’t have the characters vomiting vitriol at each other (though, to be fair, there are a few actual vomit scenes).

Even within the usual no-budget and rushed quality to Milligan’s work, he manages to capture something startling and captivating (along with some decently composed shots – I mean the guy is clearly a cinema lover) within this twisted psychodrama of a chamber piece. And while odd duck Kalen and creepily inexpressive and lisp-voiced Shaw might be far too weird to ever be welcomed onto a Hollywood lot, those very qualities is what makes them just the right representatives for the unpolished Milligan vibe. 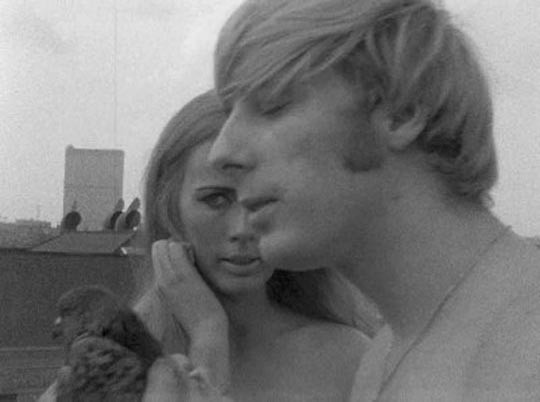 I liken the visions of Milligan to that of watching that one student filmmaker in the class whose dailies are consistently leaving the other mostly twenty-something vaguely wannabes looking around at each other slack-jawed, knowing that while they’ve spent their last months having no idea what they’re doing with that camera, well, this guy did. They might not be witnessing the next Spielberg, and definitely are not watching something pleasant, but what they are clearly experiencing is that rare gift – a filmmaker saying something with his camera (I admit, I’m especially akin to that concept as that is kinda how I felt, if you’ll excuse my possible hubris, the experience went with me when I was presenting my Cutting Moments dailies to my fellow New School student filmmakers).

Looking forward to chronologically backtracking to Staten Island and Milligan’s (I’m sure) much more histrionic Torture Garden. Thanks again to the obsessives at Severin, who brought us this absolutely mental Milligan bluray box set, for allowing it all to happen.