It was while navigating the near out-of-control twisting mountainous roads of Mulholland Drive overlooking the extraordinarily complex, harshly economically-divided, rep cinema-flushed City of Angels below in our rented convertible (I splurged on the trip), accompanied by a gaggle of excited girls (no no, stop imagining a set of LA fashion models, this was a family vacation – my 16 year old daughter, daughter’s friend and my ex-wife – not that the imaginary group of females you conjured up likely would have happened even if this wasn’t a family vacation) when I began describing the labyrinthine mystery and delights of David Lynch’s great Mulholland Drive (I know, everything goes back to a movie for me)… and, with the three listeners’ interest sufficiently peaked, a plan was hatched… upon our return home, at some point, not only would a Mulholland Drive screening on le projector chez Buck now be on the shared itinerary, but perhaps even a longer form, non-chronological random Lynch retrospective (anything to get my daughter to come over more often).

So… back in Montreal, it was time to revisit these two dark cinematic fables (on separate nights – viewing and contemplating one Lynch film on any given night is more than enough), made a decade and a half apart. Perhaps one could argue which they prefer (I guess, push come to shove, I found the shifting delights and terrors that is the vibrating sensation of “Mulholland” a tad more dynamic than the more consistent through-vibe of the early, yet admirably fully-formed vision that is Blue Velvet), both evocative in their conjuring of darkly phantastic and swirling worlds brimming over with sensual eroticism and profound mystery, with comic absurdity and extreme violence, with moments both amusingly naïve and deeply unsettling (sometimes moving into outright harrowing terror – and I’m not being hyperbolic here) reminded me how – while the vast lot of the great modern Hollywood guys from the 70’s and 80’s have either had long creative droughts (sometimes near decades long) before managing to find at least a respectable modicum of their footing again (with Woody Allen, Martin Scorsese and William Friedkin coming immediately to mind) or simply losing it entirely and forever (alas, Francis Ford Coppola, it’s you who now come to mind) – the truly unique Lynch has never for a moment stopped channeling… well… whatever exactly it is that he’s channeling. 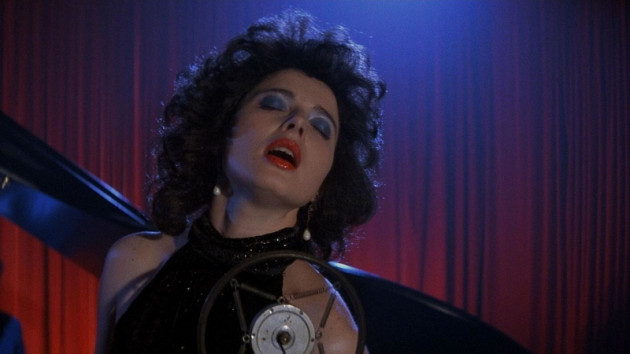 Wouldn’t be surprised if it’s the transcendental meditation he practices (or so I’ve heard) that leaves him flowing on all creative cylinders, but whatever it is, Lynch has plumbed the same unmistakable territory again and again, with wildly mysterious scenes often circling about Innocence Lost (like Laura Dern’s Sandy and Kyle MacLachlan’s Jeffrey in Blue Velvet and Naomi Watts’ Betty in “Mulholland”), chock full of shifting identities, wildly black humor, shrieking horror (and equally shrieking laughter) – it’s the kind of unique material that for mere mortal filmmakers would lean precipitously close to hurling down into painful self-awareness over time (I’d say the closest Lynch came to that was with Twin Peaks: Fire Walk With Me, but plenty of respected peers would disagree with that assessment) – and just rarely ever goes wrong (I’m talking from his anxiety-ridden, fitful dream-state start, 1977’s Eraserhead, right on through the sublime euphoria that likely is his culminating swan song, Twin Peaks: Season 3 … okay, perhaps he went a bit askew with Dune, but that was for all sorts of reasons beyond his own internal workings).

When I hear chatter about the opening of Blue Velvet (the film, and moment, that introduced him to a mass audience) with that much-ballyhooed and unexpected (at the time anyway… we weren’t yet accustomed to the welcome rhythms of a David Lynch film) move below the fine cut grass lawn into the terrifying microscopic underworld within the lawn (just outside our range) teeming with bugs and creatures (and eventually disembodied hacked off ears) – right before, not accidently, Jeffrey’s father, in the midst of yard work around his white-picket fence home collapses from a sudden heart attack, the catalyst for his son, MacLachlan’s Jeffrey, to undertake a journey of discovering that ominous ‘other side’ as a way of grappling with the sudden realization of the vast ‘void’ known as death – as ‘revealing what exists just beneath’, I never think the description never quite gets at what the director is getting at.

Lynch’s vision is bigger than that. It’s not a presentation of ‘what lies beneath’ (leave that up to mediocre literalist filmmakers like Robert Zemeckis and 99.9% of humanity), but an attempt, through absurd characters and situations (and through the inexorable movement of his camera) to transcend the literal and move into the Void That Is All Things, inevitably revealing our daily symbolic constructs as patently false, set up by us to avoid this reality. And it’s from that neuroses, that inability to harmonize the truth with our constructs, from which the terror comes. Of course, he has his specific interests – in old-time crooning, 50’s lifestyles (aesthetic elements both out of time and timeless all at once) – that more deeply personalize his work, but they end up merely reinforcing the concept of artifice that conceals, or hides, or renders things ultimately unknowable when read through our standard human terms.

It’s similar to the instinctive resistance I feel when Lynch fans try to ‘read’ the meaning of the strange recurring images, the mysterious dialogue, and/or sudden odd appearances (or identity shifting) of characters that dominate Lynch’s worlds. To me, the very attempts to ‘tie it all together’ is exactly the search to find comfort in creating meaning in codes and symbols that Lynch, as a filmmaker, is rendering as meaningless (or absurd).

I mean, how many times can we experience Lynch’s camera drawn inevitably into a pool of darkness, or staring at never-parting curtains that sway ominously with mystery (rendering what’s behind them un-understandable), or stare at out-of-focus vibrating walls (replicating Watts’ Betty’s vision as she furiously masturbates, trying to reach that state of pure nothingness that orgasm can bring), or of course disappearing under the grass to reveal a crazed bug world with none of our imposed order, invariably accompanied by a deep droning undertone on the soundtrack, a reminder of the all-engulfing and unknowable void – the void that’s right there just beyond the constructed symbols and codes we all embraced in our terrified infant stage as a desperate means of making ‘the bad place go away’ (a concept of pushing past the harrowing denial into a transcendence I’d argue that every bit of Lynch’s films are essentially built around) – and have it fail to profoundly resonate? Never, I’d say (so far anyway). And we’re talking a forty plus year career. Amazing.

I’m currently taking, for fun, an online lecture series on neo-noir films that covers the period from the early 70’s up to 1986, and, while the final two chronological films we’re going to discuss in the next (and last) class are interesting choices – Clint Eastwood’s daring exploration of the sexually perverse nature hiding behind that Dirty Harry persona known as Tightrope and Michael Mann’s super-slick trendsetting early-Hannibal Lector entry Manhunter – I’d argue Blue Velvet would have been the perfect film to end the series on as it indicates, as far as I’m concerned, a new beginning (and transformation) for the genre.

While the ‘Lynch film’ narrative operates ostensibly within neo-noir, Lynch explodes the underlying unease and existential mystery familiar to the genre into mind-blowing literal cinematic manifestations that pulse vibrantly within the reality of the film. It’s not only a next step for neo-noir, but an elevation of the genre into its purest, most brilliant form.