A young beauty (Jennifer Lawrence)’s desperate bid to be the perfect muse for her narcissistic writer husband (Javier Bardem) watches in helpless horror as her bucolic life in the country begins to shred into hysterical pieces as intrusive strangers and crazy events pile up, building to a point of utter chaos and madness, with even the house beginning to reveal a rotted inner core.

I was won over by Aronofsky’s wildly surreal trip down schizophrenia lane, Pi, back in 1998 and while his follow-up, Requiem for a Dream in 2000, may not have had the authentically grimy feeling of Hubert Selby Jr’s novel (and leaned far more heavily towards the reactionary – as a friend said to me, it’s a film about doing drugs made by someone who never did them himself and I’d add by someone afraid of them as well), but, man, what a mind-blowingly energetic trip of beautifully captured glossy despair. Since then, his output has turned a bit more hit and miss. I haven’t seen The Wrestler yet, and many trusted film confidants claim that as a great one in his resume, but as much as The Fountain’s photography beautifully captured and fetishized the face of Hugh Jackman (while being oddly disinterested in Aronofsky’s girlfriend muse at the time Rachel Weisz — though maybe not so odd when considering it in the context of the Man/Artist’s relationship with his revolving line of muses in Mother!), the attempted Buddhist perspectives just didn’t ring very deeply and didn’t create a particularly interesting narrative (more to the point, it was boring) and Black Swan, as fun and crazed as it is, plays decently enough as a hysterical (yes, New Leftist fascist word police, I’ve deliberately dangled that word dangerously close to the female of our species twice now) black comedy, but is too stiff and didactic to really resonate. It’s as if the director has lost a bit of that beautiful sensuality he used to capture with seeming effortlessness in his early work; a seductiveness that had the power to sweep us along without noticing (too much anyway) the lack of real thematic heft.

Saying that, in a studio system dominated by slick consumerist superhero movies and mainstream-loving juvenile comedies designed to keep an entire society infantilized and living in an anti-intellectual bubble (so as not to notice the corporate/military powers raping the land and exploiting the people to the point of planetary extinction), it still gives hope to find a maniacal filmmaker managing to put something out there that isn’t defined by an easily digestible ‘feel good’ philosophy and a clinging need to hold strong to the status quo; even if most of the voices ringing out are those insta-outrage leftist warriors I mentioned before, programmed to pounce on and demonize any perspective that doesn’t fall exactly within their acceptable ‘safe space’ boundaries (especially in the case of a male director creating a ‘female’ – with Aronofsky cleverly – though, not particularly powerfully – he’s more like a good showman giving his pitch – presenting just the right totems and indicators to stoke up the flames of the New Left on one side while giving himself enough blatant ammo to stand behind evil destructive male representation on the other). 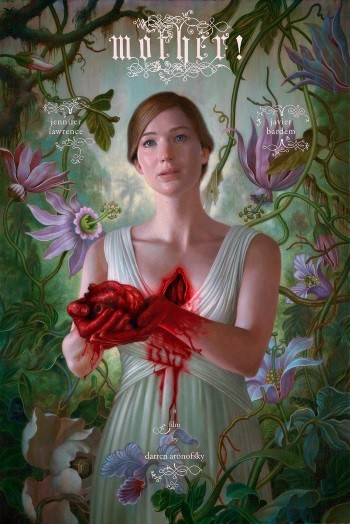 Initially, as the film begins and we’re introduced to the beautiful Lawrence character (and what an intro, as she walks around her new country home, with the early dawn light coming in through the windows and doors perfectly highlighting all the intimate curves of her body through her tight little morning slip – now this may be just me, but it almost felt like Aronofsky, who is dating Lawrence, is saying “Hey, check out what I got”) – I was giving Aronofsky some props, daring to present a female character who seems to have no proactive desires of her own, other than to be a ‘mother’ to the children she desires and an ever-accommodating muse for the writer/lover she lives with. The camera stays constantly in roving close up on her soft, doe-eyed face as she gives us one of the deliberately least self-actualized female characters I’ve seen in a long time (I mean, has a character, male or female, ever muttered the words “I’m sorry” as many times as she does? Doesn’t Aronofsky realize women don’t have to say that anymore?). With her soft features and almost blank look as the intrusions upon their country home brought on by her exceedingly welcoming lover (all in the interest of his self-aggrandizement as an artist) grow epically insane and at a whirlwind pace, she mostly strikes the appearance of a deer caught in the headlights. I mean a gorgeous one, but a stricken deer nonetheless.

As the events grow to an increasingly absurd level, with the characters acting as symbols and representations rather than real human beings (as my friend Esther Bourdages trenchantly observed, ‘There was more honest emotion in ET than in this film’), it’s hard not too experience it, similar to Black Swan, as an attempt at absurdist black comedy. Similar to that film, though, Aronofsky’s hand is way too heavy (and unaware) to operate successfully there (which is why, for a North American audience already mostly tone deaf to the intricacies of irony and dry wit even before 9/11 – the date of the event that finally convinced them that anything but the most earnest of gestures are suspect and dangerously close to letting the terrorists ‘win’ — the humor of it seems to have flown right over their collective heads).

One can only watch in amazement at the series of events. The brutal murder at about the halfway point that our Mother is stuck somehow in the middle of is the moment that had me laughing the loudest and, after this, the continued inundation of chaotic imagery (and deliberately absurd quickness of events) becomes mostly a bit tiring, especially with Aronofsky using images of riots and riot police in gear (with absolutely no political connections and thematic resonance attached to them at all). No matter how excitingly presented, its ultimately empty imagery.

As his career has moved along, it’s becoming more and more clear that Aronofsky, mirroring so many of the celebrated auteurs of today (Von Trier being another, especially with his more current work), is as much showman (con man?) as filmmaker; a brilliant one, mind you, able to snow much of the intelligentsia over by didactically and overtly hitting sexual and gender hot buttons in the context of overwhelming cinematic bells and whistles that carry us along and disguise the obviousness of the message and the lack of depth beyond it. The later poppycock that him and his muse Lawrence have been spewing that the film operates as some kind of metaphor for the awful treatment of the Earth by humanity is practically film school level nonsense and yet, again, cleverly topical enough to get most of the film press to happily regurgitate it out to their audience as profound truth with barely a critical thought in their heads to get in the way.

Aronofsky ultimately posits that Woman (as a universal entity) is the gender that carries (Mother-like) the seed – the kernel – of true unblemished love (which apparently is the most pristine of crystals, fragile yet mendable) within… and that Man (the other universal) destroys it with his narcissism and selfishness. And, yet, the whole arrangement has as much complexity (and is as patriarchal) as the biblical mother/whore paradigm. It’s more the outlook of a narcissist filmmaker showing us his facile viewpoint of gender relations – needy co-dependent actress, whose only goal is to give to — and be the muse of – her powerful Man (and then shrieks how “she gave him everything” at the moment of her ultimate destruction before the cold indifference of that vain and selfish Man, who then moves on to the next crystal-carrier to act as his muse).

The closing image, which presents the idea that this little Hellish Play goes on and on in some infernal continuum – and that this is the one true form of Man and Woman – is amusing in revealing how stunted the perspective is and doesn’t really speak much to deeper revelations (with the lack of complex characters, ironically reinforced — opposite to the desired ‘profound’ way it is meaning to have — with the credits presenting no names for our main players). It is timely though, in that it’s depiction and lionizing of the passive Lawrence character fits right in with today’s strident culture of victimization identification. So I guess it has that going for it.

Michelle Pfeiffer and Ed Harris are immensely enjoyable as they indulgently chew the scenery, playing nasty and vain literalizations of the Lawrence character’s worst fears (with all the events and characters being manifestations of the increasing anxiety and fear of a co-dependent woman losing her Man, her home and her chance at having children – you know, everything that grants her life meaning).

I still enjoyed watching the out of control imagery (I mean, when the baby gets ripped apart by the frenzied worshippers? Priceless), the ratty performances by Harris and Pfeiffer and certainly that opening worship of Lawrence’s bodacious outline (thinking about it, perhaps the most emotion I felt was when she inevitably started to close the door on the perfectly placed lighting at the end of it — ‘No! No! Don’t close the door!’). There is certainly pleasure in watching naughty brilliant showman Aronofsky show us everything from that grab bag of tricks he and his DP work from… but somehow I’m just always hoping, thinking back on that filmmaker I initially admired so much, he would just have more to say.