A young hitchhiker Nancy (Melanie Verlin), on the run from the sexual abuse of her stepfather (Lawrence Tierney, the ‘name’ of the film and one of the true greats of the yesteryear noir genre — including the stunning 1947 Robert Wise-directed Born to Kill, which I know I’ve reviewed in massively glowing terms somewhere back there in my column [ed. Yep, Dec. 26, 2017] — but now way past his prime, the gettable recognizable ‘name’ that producers of these kinda films once thought was important) is kidnapped by a rural satanic cult who perform Black Masses at the midnight hour (hence, the title) in an attempt to raise their dead mother, with the rituals including, Nancy soon discovers to her horror, slitting the throats and drinking the blood of fellow abducted young women just like her.

Another month, another Deuce screening, with this one offering the far-too-enticing-to-pass-up opportunity to check off another from that dastardly list of cinematic perversities denounced by moral watchdog Mary Whitehouse and her fellow grandstanding political ilk as Video Nasties, films so morally corrupt just the act of seeing them could permanently contaminate the viewer’s mind and spirit (I mean, talk about peaking my interest). And in appropriately scratchy, slightly commie-red 35mm print, no less! 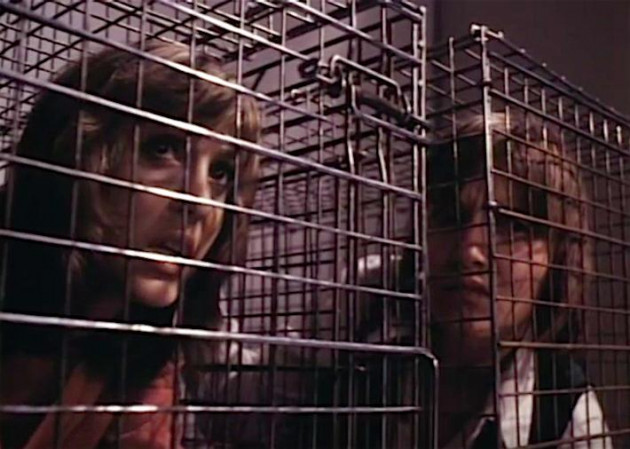 I’m sure I’m not the only one. Like just about every other horror geek out there who prays at the altar of Romero and his slow shuffling zombies, and has at least a modicum of discerning taste, while paying props to John Russo for his role as co-writer of the Big Daddy of zombie films, that masterpiece of nihilism, Night of the Living Dead I’ve always considered the relatively physically meek and tight faced presence of Russo at just about every horror convention I ever attended a slightly suspect lesser talent. And that’s at best. At worst, living endlessly off his connection to that Romero classic, while churning out lots of straight-to-video no-budget horror tripe that I haven’t had the least interest to see (Santa Claws? I mean… really?), I saw him (and maybe still kinda do… only now with a little more complexity, perhaps) as more conman than legitimate filmmaker.

And while I wouldn’t claim the skimpy-budgeted Midnight offers some earth-shaking change in my perspective on Russo as a director (though, even there, amongst some clunk, Russo does manage a nicely unsettling rural sensibility, and even some genuinely creepy and disturbing imagery), I would argue – and hear me out on this – Russo as screenwriter plums fairly deep, with an admirably complex approach to the world he creates and the characters within it (at least some of them, anyway).

Take Tierny’s alcoholic cop for instance. First attempting to sexually assault his step-daughter, then lying to her mother (as a way to protect himself) that she has been coming on to him, he eventually – quite surprisingly — goes on a statewide search for her, using all of his police connections. While unable to convincingly move his aging and weighty bulk at this point, Tierny does manage to illicit a certain amount of reluctant sympathy, through the guilt we can see in him for what he’s done (and that’s carefully placed there in the script by Russo), trying to find a girl whose return home could likely signal his own doom if she admits to why she ran away. It’s an odd, complex and daring decision by Russo, making this character an ostensible hero. 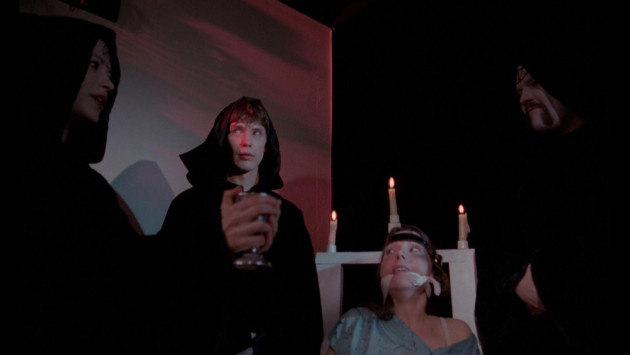 Then there’s the two young men, one white and one black (with bubbling over racial tensions playing a key role, with rampant racism revealed all throughout the backwoods bars and gas stations), who pick up Nancy, having decided to go on a road trip together down to Florida, though without a penny. “If you don’t have any money but you have somewhere to go, there’s nothing immoral about stealing food, now is there?” the one boy explains to the initially reluctant hitchhiker; just the kind of food for thought – in this case, the poor man’s justification for his own existence and survival — that I now see would appeal to this filmmaker who came of age, along with his pal Romero, during that time of massive social upheaval and awareness known as the 60’s, that clearly shows through in that Romero classic.

Even more interesting (and, again, thoughtfully complex in the writing), is the black boy’s barely contained hostility towards Nancy, an aggression that hints at a possibly deeper unspoken resentment – of having his position as one of society’s ‘victimized others’ usurped, with his white friend and Nancy clearly immediately attracted to each other.

Right from the grim Children of the Corn-like opening scene, there’s some unsettlingly violent set-pieces throughout (with much of their effect admittedly attached to the no-frills slightly amateurish filmmaking style, the kind that often helps films like this by vaguely implicating the filmmakers themselves as much as the perpetrators we’re watching), no more so then the startling scene of the assassination of two young men by rogue hick police officers. Even though we eventually realize that they are actually two satanists who killed the officers and have stolen their uniforms, the grim presentation resonates with the kind of racially-motivated killings in the South that were sensationally covered by the media during the 60’s.

As with its obvious inspiration, The Texas Chainsaw Massacre, Russo’s focus is presenting the family as the corrupt and perverse home that creates the horror. Individual humans (even the marginalized ones) are filled with distrust for, and resentment of, each other. Of course, these kind of challenging portraits used to flow out of horror films during the 60’s and into the 70’s (with Hitchock often credited as having started it with Psycho ultimately represented by the image of Norman Bates’ mummified mother’s corpse, which “Texas Chainsaw” would then pay homage to with its barely-alive mummified nutso family patriarch, and Midnight follows through with the still present corpse of the mother the satanist family is trying to bring back to life with their sacrifices) are mostly long gone, with the horror films of today now mostly made by corporatized kids whose main focus is on an empty consumption and regurgitation of horror films past, with their idea of social critique usually nothing beyond non-ironic virtue signal window-dressing.

It’s no surprise the young audience laughed all throughout the film (except, I must say, during the scene of the faux cops killing the kids… this actually shut them up for a few minutes), revealing yet again how these films, subjects of these kids’ mirth and derision, are far smarter than them.

And kudos to Russo. I mean, he might still be shamelessly stumping Night of the Living Dead as an endless pool of money and attention for himself (though, I guess, why not, if he was as important a part of the film as he says he was – in a short interview that comes as one of the numerous worthwhile extras on the new Severin Midnight bluray release, he now contends that he is in fact the sole writer of the screenplay for “Night”, which the deceased Romero obviously can’t refute), as low budget sparse and kinda awkward as it is, Midnight nonetheless raises my perception of Russo. There’s clearly a thoughtfulness and daring to his approach… and even makes me wonder if he in fact had more to do with all that’s going on in Night of the Living Dead then I have ever given him credit for.