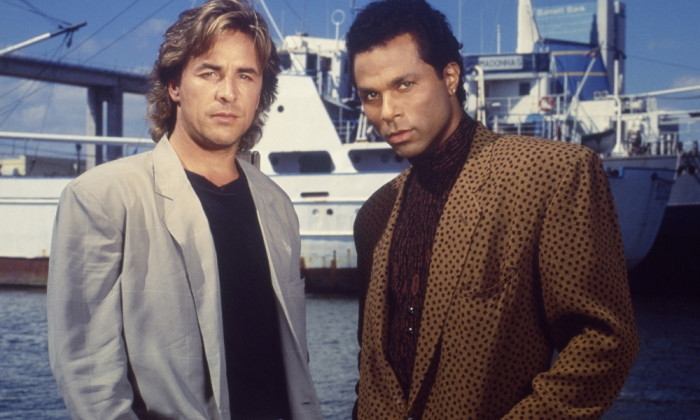 After the jaw-droppingly bonkers jumping-the-shark approach taken for much of the previous season (in likely a last gasp bid to save the series for the rapidly sinking show), with now everyone involved haven gotten the executive memo and were accepting fate that this would assuredly be the last climb up the flagpole (or however that saying goes), Season Five took a kind of no frills tact, with a decidedly more grim (hell, I’d even say dour) overall tone than in any of the previous seasons (that is, once they were able to wrap up that whacky, much more Season Four-appropriate, ‘amnesia’ storyline they left us hanging with at the end of the last season)… and I don’t mean just narratively, but in the entire production design, with the costuming moving from the flashy pastels and slick black and whites, to less sensational attire (including having Sonny sport a pair of simple faded jeans every now and then… though with knee holes and no socks, naturally) and the locations focusing on a seedier, underbelly vibe than the previous seasons. There will be little Miami Beach glamor for this last go (the better to reinforce that last bit of disillusionment needed for Crockett and Tubbs to walk away for good by the end). 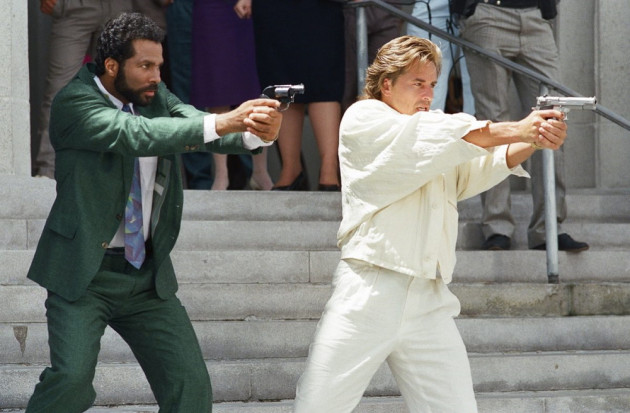 We still follow our familiar little cabal over there in the Metro-Dade vice squad, fronted by that suave pair of detectives, the always smouldering Sonny Crockett (Don Johnson, who, with his longer than usual flowing locks finally had a haircut that entirely works… weird, with all the attention paid to the ‘look’ of the show, that it took this long to get it fully right) and his ex-NY cop partner (though unlike any New York cop I ever saw), the self-described ‘sharp as a tack’ Rico Tubbs (Phillip Michael Thomas), with his eye-rolling ‘Jamaican mon’ undercover persona nowhere to be found this season (I guess the showrunners finally recognized just how misguided that whole act was), led by the taciturn Lieutenant Castillo (Edward James Olmos) and filled out by the usual regulars… but the more sensationally (and celebratory) presented drug life in Miami from the first two seasons has been toned way down, the ripped-from-the-headlines approach of Season Three is nowhere to be found, and the aforementioned Season Four… well… that season, featuring the likes of snuff filmmaking, UFOs, the apparition of James Brown, a large floating jar of peanut butter (no way to describe that one without seeing it), a cryogenically frozen rapper, Sonny suffering amnesia and joining the bad guys, an overtly Fellini-esque dream sequence, bull semen (yep, you heard that right), a Sergio Leone style Spaghetti Western stand-off and the possible intervention of God at one moment (and there’s more, these are just the moments I can think of off the top of my head)… there will never be another like that one.

There are still a few wonky bits of attempted humor and 80’s silliness to be found (I mean it wouldn’t be “Vice” if there wasn’t at least some of those… ), they’re just muted. It was time to move away from the slick, bubble-gum-minded rock-n-roll MTV-style 80’s vibe that the show itself helped created, and look ahead to the more ‘adult’ orientated crime shows like the “Law and Order” franchise that would define the aughts and beyond, with that show’s runner Dick Wolf supplanting Michael Mann as the next big name in television. 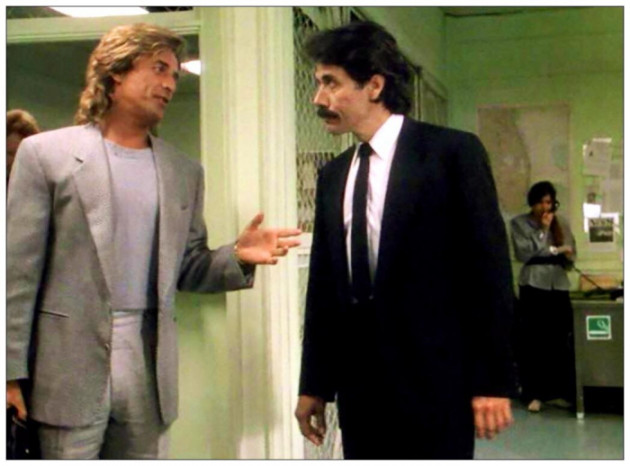 There’s no longer any sightings of Elvis, Crockett’s pet alligator. The jaw-droppingly unfunny Stepin-Fetchit recurring black conman Noogie is gone, even if the equally racially suspect bumbling street scrammer Izzy is still here (though he’s always somehow fared better, most likely because he’s played by a much better actor than the Noog-man, who was literally a street performer, of what talent entirely escapes me). The season even put aside one of the show’s more talked about devices, the ‘hot celebrity’ guest star of the week (likely both because the show just wasn’t as ‘novel’ to do anymore for guys like Phil Collins – can you imagine he was once cool? — but more likely due to the shrinking budgets putting their fees out of range), to the point of even foregoing the funkier cameos that spoke to an even hipper crowd (like Warhol god Joe D’Allesandro, for instance, having done a quick bit as a wealthy nasty drug dealer ‘wit’ a t’ick Bronx accent’ back in Season Two, I believe).

All was far from lost, however. Even if the musical montage sequences that Mann built the magical quality of the show on were now far less a focus, there were still a few interspersed here and there, with one even exceptional one — so good I’d put it up with the best of the entire series, providing a reminder of the almost-weekly euphoria the show was once capable of on this front — in which the entirety of Kate Bush and Peter Gabriel’s powerfully moving “Don’t Give Up” is used, following the weary and beaten Sonny, now jarred free from that darn amnesia that had him believing he was actually his evil drug-dealing alter ego Burnett, slowly walking into the precinct to surrender, trailed by his memories, good and bad, flooding back (as images from previous episodes), concluding with a sublime touch of having all of his fellow vice cops now training their gun on him. It’s got all the magic, over-sentimentality and kitsch that defined those sublime 80’s moments, and it works like a beautiful welcome charm. 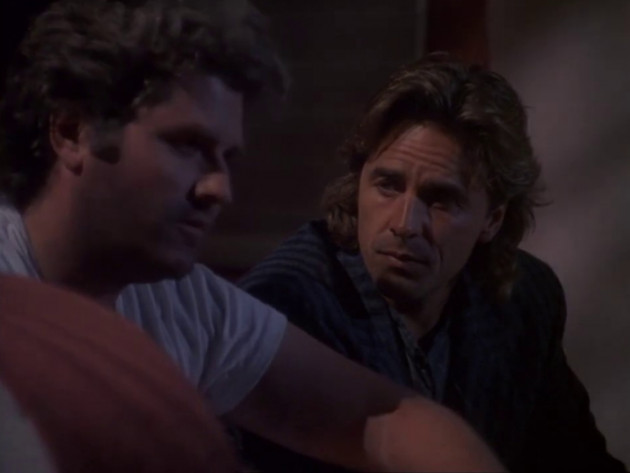 The season focused its energies on a revolving door of solid, less splashy co-star performers (as “Law & Order” would eventually do), featuring really good turns by recognizable thesps like Amanda Plummer, Jennifer Rubin (how that beautiful, captivating creature never made a larger impact I’ll never know – perhaps too quirky, or real, or vulnerable, or something… but she’s got something, that’s for sure), the great acting coach William Hickey (who was already playing old men at twenty), Karen Black and John Leguizamo (I’m too lazy to look but I’m convinced he played another part on the show in a previous season – cheating!).

There is also the one exceptionally inspired bold set piece in this season, as the walls of the room we keep returning to in of a feverishly guilt-ridden and hallucinating Nazi war criminal on the run (played by the late long-time acting coach William Hickey, a noted character actor who always looked old even when he was young) are presented in entirely expressionistic black-and-white style, speaking directly and overtly (to anyone in the know, as the production designer certainly was) to that greatest silent masterwork of German expressionism, The Cabinet of Dr. Caligari.

We were reaching the end and it was obvious. Lot of episodes have our favorite pair operating solo (for reasons given like Crockett off dealing with his court case related to having killed all those people when he believed he was drug-dealing Burnett and Tubbs just… off somewhere, spending his time leering in Tubbs fashion at semi-clothed Miami women, no doubt), with the true reason being the actors having read the tea leaves and off trying to interview for new gigs elsewhere. There’s even a few eps where neither are in it much (including the absolutely atrocious episode near the bitter end where we are suddenly introduced to and follow an eager Youth Crime Unit, a small group of absolutely charmless TV-style lookers – other than Laura San Giancomo, who will eventually reveal herself to have some chutzpah in Sex, Lies and Videotape but is entirely forgettable herein – a clear failed attempt at a sort of backdoor pilot for a new show that had no shot at ever developing).

There’s even a few really nice wrap-ups that deal with returning characters played in earlier episodes such as Pam Grier (now, THAT is some sublime stunt casting, as she plays an ex-addict NY cop whose past keeps haunting her, and previous lover to Tubbs, with the fire never having really died down between the two – in other words, he starts acting extra slimy around her) and Michael Mann-fave Dennis Farina, as the charming and clever informant Al Lombard.

With seriously grim topics like child prostitution (that ep is so harrowingly effective the networks refused to air it during the show’s initial run) and the sight of fellow cop Switek (Michael Talbott, who’s been there from Season One) spiraling destructively into season-long gambling addiction (with the show doing a good job revealing the hold addiction can have, first giving the idea our sometimes bumbling/sometimes ultra-professional surveillance officer has it all resolved in one episode, then having it return as a growing problem, again and again), it’s no surprise Crocket seems more forlorn than usual all season long (after regaining his memory, naturally)… paying off with the final resignation by both him and Tubbs (with even Michael Thomas miraculously managing to find some surprising subtlety in his performance as we approached the finish line with these last episodes, the actor clearly channelling some of the genuine resignation and sadness at the reality that his once-in-a-lifetime cash and chick cow he’d have been happy to ride forever was coming to an end), driving off to who knows where, their five year mission here in Miami completed.

It was a perfect ending for the duo. Not so much for our two female cops, Gina and ‘Big Booty’ Trudy (that’s what the name plaque at her desk calls her and she keeps it there!), always second fiddle on the show, are even more ignored this season, showing up randomly (dressed in quasi-prostitute garb) basically to provide some quick information for our glory-hogging duo, and Switek, whose addiction problems are left completely hanging (though that’s perhaps appropriate to life). Why, even our butt-of-the-jokes street con-man Izzy got a nicer send-off, with a final episode in which he gets to really display his own acting chops, with his character forced to get real and deal with his out of control fellow conman cousin, who shows up out of nowhere, as pathologically conniving and dysfunctional as Izzy but with nowhere near the survivor skills.

As with a long satisfying read, the end comes with mixed feelings. I’ll miss you, Miami Vice. I’m tempted now to check out some of those films neo-noir (brought to us by directors with impressive names like Frankenheimer and Hopper) that Johnson would delve into with his post-“Vice” attempt to mold a new leading man career… one that never quite materialized, as the good-looking actor was more than capable of evincing gobs of unpretentious charm, but never quite able to conjure up the transformative magic required to reach that next level of super-stardom (that’s okay, him and his peeps would figure that out for themselves and get Johnson back on the television track where he belonged all along, with another successful TV show, Nash Bridges … gotta give it to Johnson, he’s kept it real, which has led to a loooooong career for the guy).