Feuding televangelists. A cryogenically frozen reggae artist. X-file style alien abductions and visitations. And even — yes, you read the above correctly (and, hard as it is to believe, it is a centerpiece quote directly from an episode of the show) — a storyline swirling about government agents fighting for possession of… a stolen cannister of high-end cattle semen (from a bull named Gargantua).

While the Metro-Dade vice detective duo (Sony) Crockett and (Ricardo) Tubbs (the always smoldering, slightly-longer-hair-this-season Don Johnson and the never-losing-his-strut, now-perfectly-groomed-bearded, still-convinced-he’s-one-slick-piece-of-work Phillip Michael Thomas) are back – fellow returning oink-oink vice squad members at their side and rock-weighted gravelly-voiced shop steward Lieutenant Castillo (pock-marked Edward James Olmos) at the helm (that sure-fire buzz-kill of a leader who never met a situation that didn’t require a dour attitude) — my, have some of these storylines changed.

The only explanation is the ratings. Many don’t realize (I didn’t before heading down this retro path) but as fashionable, trend-setting and television-landscape changing as Miami Vice was, it only really had one wildly successful season… and that was its first out of the gate. Each year after was a tale of ratings decline, leading to the season three approach of ‘ripped from the headlines’ storylines from new showrunner Dick Wolf (he of the eventual mighty network television-ruling Law and Order show, with all of its ad infinitum spin-offs) and the introduction of darker, earthier tones our vice cops are suddenly draped in (I guess meant to represent the grimmer, morally-tainted world of high-end drugs, seductive sex and mob crime which they found themselves wading through each week), openly clashing against the cooler beach hues of Miami around them, with the television executives and show-runners fighting a losing battle (right to the end) against the reality of deserting viewership. 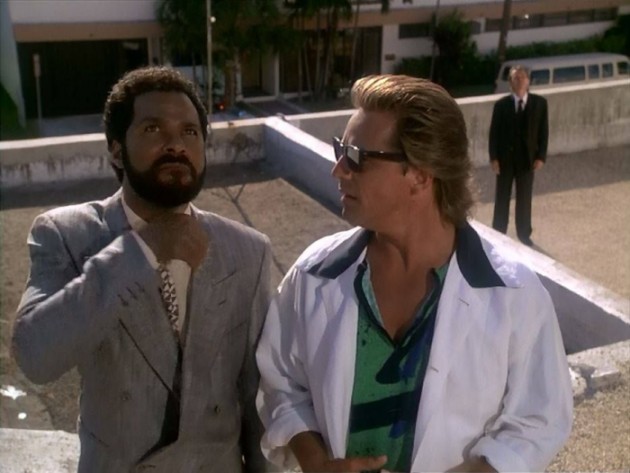 And, man, do the growing signs of desperation get really – well — interesting during Season Four. I mean this isn’t just a case of Arthur Fonzarelli jumping a shark in a woefully misguided attempt at creating suspense on Happy Days. Oh no, this is Fonzarelli getting briefly abducted by aliens, then haunted by flashbacks to the event in the form of James Brown (yes, the “I feel Good!” James Brown) sweatily shaking his hips amongst the clouds interrupted occasionally by the recurring image of a massive, screen-filling jar of peanut bar, then getting eaten whole by the shark. Okay, the shark storyline doesn’t happen in Miami Vice but you could almost imagine it could have, considering the alien storyline – James Brown, floating peanut butter and all – is taken right from an episode that centers around the abduction of the ever-slinkier dress wearing (I guess at some point she figured she might as well save the time of getting changed every time she heads out on to the street for her usual undercover assignment as a prostitute, when she can just always dress like one – and I for one appreciate the decision-making) shapely female vice piggie Trudy (Olivia Brown).

While the aforementioned way-off-the-rails storylines speak to a sort of loopy self-spoofing that, as any genre fan knows, tends to be a sure death-knell, at the same time (again as genre fans know) a lot of interesting (and seriously loopy) things can emerge from this anything-goes period, and I don’t mean just the head-scratching enjoyment of, say, the unbelievably misguided comic relief of the jaw-droppingly stereotypical (hey, it was the 80’s! Racism was still okay!), inept and sleazy Cuban conman Izzy (Martin Ferrero) in a Spaghetti Western style stand-off (Sergio Leone music and all) on the railroad tracks between rival government agents in the ‘case of the frozen bull sperm’ episode (yes, I’ll say again, that was a real episode)… I’m also talking the genuinely inspired, simply nutso episodes (accompanied by a healthy dollop of the deliciously perverse) that would certainly never have happened without the ‘throwing darts against the wall to see what sticks’ approach of the season, like the deliberately giallo-style motifs and stylistic approach to the episode concerned with a creepy child-voice speaking serial killer and his glass doll fetish, or the weirdo episode with Crockett (Don Johnson) going undercover to join a ‘video dating service’ discovering the killer to be, in unadulterated Brian De Palma-esque fashion, a cross-dresser taking on her deceased brother’s identity to jealously kill ‘his’ sister’s suitor (played by uber-tall super-model-of-the-day Iman, no less), or the startlingly cold and cruel Germanic Nouvo-style porn/snuff film episode. I mean it’s all more than a bit incongruous, with our gritty vice cops suddenly thrown again and again into the world of trash cinema… but whose complaining? It certainly is something to witness.

There are a number of more traditional (and well crafted) storylines interspersed throughout (though even there things are often slightly askew, with our vice folks often investigating murders, or acting as protection for witnesses, that would normally fall outside of their more lurid jurisdiction, with little explanation as to why) that play as effectively as anything from the previous seasons (I’d often be thinking with admiration ‘wow, the show still has it’ during these eps), with a concerted effort that shows through to raise the level of grit and realism to the milieu, interspersed with some of the most dazzling chase sequences of the entire series (such as the wild chase against oncoming highway traffic, with the fast cars avoiding and weaving at perilous speeds, taken straight from the 1985 slick, top-notch tough-cop entry To Live and Die in LA, ironically a film that director William Friedkin had clearly stylistically modelled straight from Miami Vice, with the original show now taking from it… the snake now eating its tail at this point). 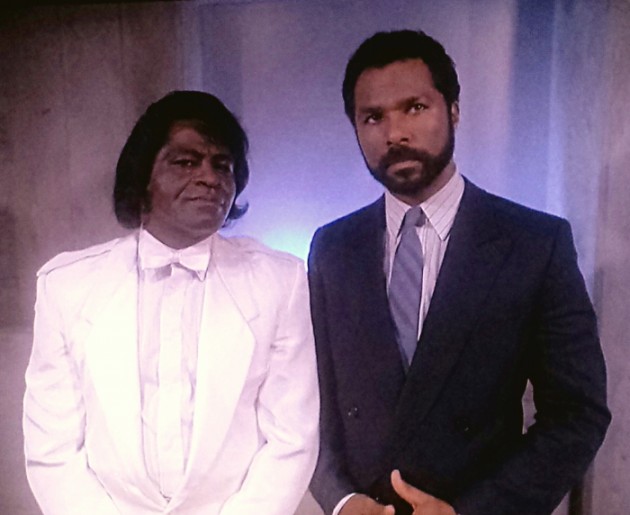 With James Brown, the Godfather of Soul

Of course, it wouldn’t be Miami Vice without the musical montage sequences (and these are aplenty, naturally), as well as the potpourri of stunt-like cameos (from the aforementioned James Brown and Iman, to sexy singer Sheena Easton’s season-long role – you can guess why it only lasts a season – as Crockett’s new pop-singing bride) and guest appearances from stars both on-the-rise or current (everyone from a pre-blockbuster Julia Roberts, to Chris Rock, Ving Rhames, Brian Dennehy and Ben Stiller, and that’s just a few off the top of my head). And then there’s also the iconic image of gay camp himself, known as Beef from Winnipeg’s beloved Phantom of the Paradise, the wild-eyed Gerrit Graham, who plays the conman cowboy with the high-end bull semen who impossibly utters those words quoted above. 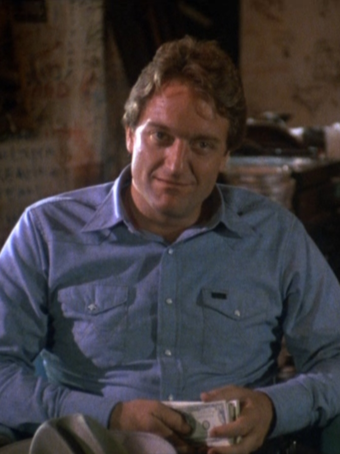 Gerrit Graham of De Palma’s The Phantom of Paradise

As wonky as it all got, intermingled with all those superior gritty episodes, I enjoyed this season as much as any of the previous ones. It’s not that it doesn’t have its awkward moments (and, yes, head-scratchingly bad ones), but even in those storylines there’s some inspiration on display. They may be reaching, sometimes beyond their grasp, but they remain committed. And it shows.

With the arc of Crockett’s new marriage foregrounding a number of episodes, as well as other ones that have him operating undercover solo, sans Tubbs (rather than with the two of them operating together under their dual aliases, Burnett and Cooper, with their alter egos being the most recognized drug dealers in Miami, making it clearly impossible to believe no one has fingered them as being those equally well known vice cops, Crockett and Tubbs), Season Four backgrounds Tubbs to second fiddle even more than usual, but perhaps that was just a natural progression than an executive decision. The two have had a good chemistry together from the start, but Johnson is unquestionably the better actor, able to carry scenes and capable of more depth than Thomas (not that that’s exactly saying much, with the affable Thomas coming across as perhaps not the brightest of bulbs, at times just happy to be there… which likely explains the almost complete absence of a post-“Miami Vice” career). 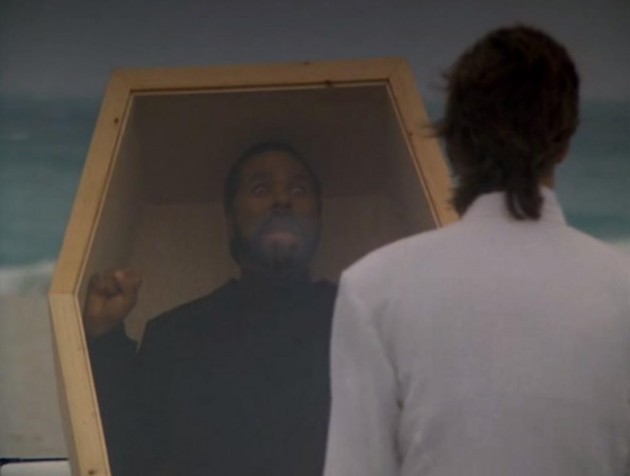 With Season Four ending on a cliff-hanger (the only one of the five seasons to end with one), as enjoyable a contrived and wonky final exclamation point on this most improbable season as could be imagined — with the emotionally devastated Crocket now suffering full-on amnesia (like, straight out of a soap opera) after a big boat explosion from a drug deal gone bad (leading to a surreal dream sequence straight out Fellini’s 8 ½ – yep, just one more impressively batshit looney tunes moment in the season) has left the rest of the vice squad believing he’s dead and him convinced he is actually his fictional undercover alter-ego, none other than the cold-killing drug dealer Sony Burnett – I’m left with only good thoughts, and high hopes for the final season to come.