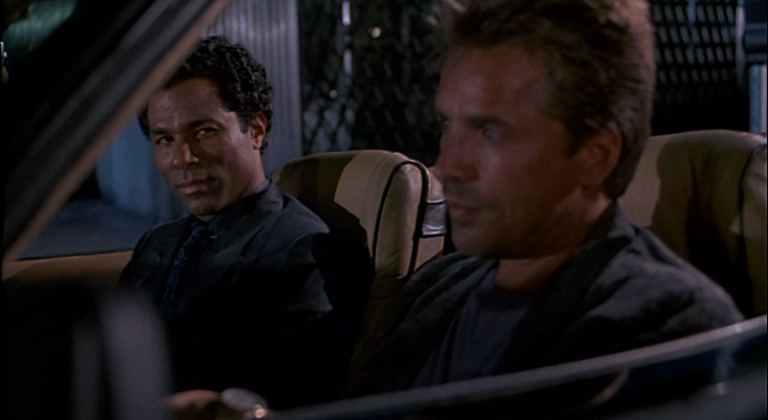 The Metro-Dade vice detective duo (Sony) Crockett and (Ricardo) Tubbs (the always smoldering under his 24-hour shadow Don Johnson and the never-losing-his-strut, convinced-he’s-one-slick-piece-of-work Phillip Michael Thomas) are back at it, continuing their high-wire undercover act, under their aliases — that usually being high-end drug distributors Burnett and Cooper (though, considering how famed they seem to be to every street criminal in Miami, how no one ever identifies them when they’re doing their drug dealers thing in the same neck of the woods is one of the mysteries of the show), or – better yet – when Tubbs is pulling his sweet-talking Jamaican drug dealing cold killer act (that, with Thomas’ exceedingly limited thespian skills – and human emotional range — is always worth a chuckle) — and surrounded by their familiar supporting oink-oink cabal; namely, the surveillance team of Switek (Michael Talbot) and Zito (John Diehl), who have been written as far less bumbling as the show has played out (the better and more tragic to mid-season kill one of them off this time — hint, hint) and the fuzz-y females Trudy (Olivia Brown) and Gina (Saunders Santiago), who enjoyed playing dress up as undercover prostitutes – that is, until Gina was raped by one of her johns in the second season (let that be a lesson to you, ladies — prostitution isn’t all fun and games!) — which has led to a more somber vibe from the duo ever since; all of them under the guidance of gravelly-voiced Lieutenant Castillo (pock-marked Edward James Olmos), that sure-fire buzz-kill of a leader who never met a situation that didn’t require a dour attitude. 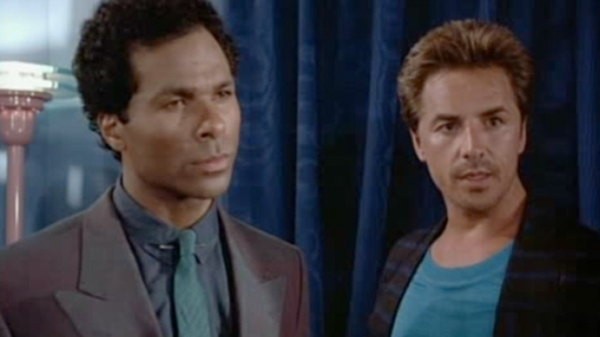 The considerable darkening in tone (and fashion) that this third season following the travails of what it means to be a cop-per in the big city (you know the drill — divorce, struggling to stay clean against all that easy-money and highlife temptation, getting caught up in the wrong relationships, one tragedy after another – geez, you’d think they’d learn what Jack Nicholson’s Jake Gittes did the hard way, walking off engulfed by darkness at the end of the great Polanski cop noir – ‘Forget it, Jake! It’s Chinatown!’) is announced immediately – with the vibrant pink splashing behind the “Miami Vice” title logo during the opening credits replaced with a more sombre blue – stating that things were gonna get heavier around here (well, as much as 80’s television could pull off anyway).

Side note: other than the title logo, though, they left the opening credits well enough alone, so I could continue to enjoy that toe-tappingly exciting (no matter how many times it plays) montage celebrating the glamor and wealth of Miami (with that naughty, would-never-be-allowed-today, weekly sight that always cracks me up no matter how many times I see it, of the Jan Hammer score’s electronic drum beats perfectly matching with the bouncing breasts of a well-endowed scantily clad female passerby).

In fashion wear suddenly changed from the previous bright whites and pink pastels to more earthy browns and blacks (though still way too impractically flashy for a couple of dudes looking to remain inconspicuous on stakeouts), I have to say it took a bit getting used to watching our duo suddenly chasing bad guys under the baking Florida sun in winter colors (still, with Crockett sans socks), but I eventually gave in to it (at least it’s nowhere near as egregious as all these modern television cop shows where everyone is forced to stumble about precinct rooms and crime labs that are absurdly shrouded in darkness – I mean, what are they trying to do? Not solve the cases, because they can’t read the crime reports?). 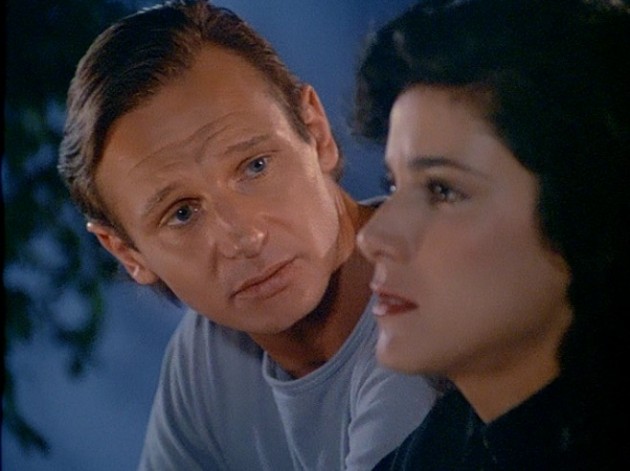 With the guy who started it all, flashy exec producer Michael Mann, slowly exiting stage left and new, NY style showrunner Dick Wolf entering stage right, the season — especially the first few (with Liam Neeson playing an IRA terrorist that Gina falls head over heels for and then Bob Balaban’s Stone, a half-suicidal photographer friend of Crockett’s from his days back in Vietnam, breaking a story on some cold-blooded American mercenaries operating illegally in the at-the-time in the news Nicaragua) – keyed in on the kind of ‘ripped from the headlines’ approach that Wolf would eventually reap a small television empire off of with his Law & Order shows, while mixing them up with the usual “Vice” fare (for instance, at least two cases of Crockett following his already familiar pattern of hooking up with hottie ladies – in this season, that’s with Helena Bonham Carter and then his celebrated real-life ex Melanie Griffith — he discovers, with a great sense of betrayal, are crooked in one way or another and has to choose whether he’s gonna take ‘em down or not). 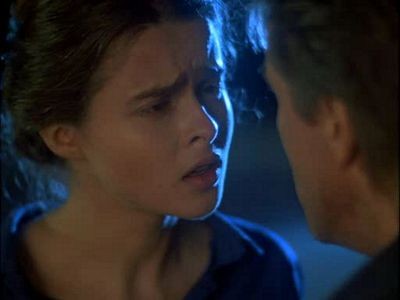 The tone may have changed, but still, even through this, another 24 episode season (it still blows my mind… how the hell did these actors survive doing these many episodes a year? No wonder there was never any crossover with movies back then… they were too exhausted to do anything else!), the charms of the show remain. The inspired musical montages of popular songs continue unabated over chase scene and/or romantic one alike, as well as the classy and enjoyable guest star appearances of not only musical stars (like Willie Nelson as a retired Texas Ranger) and established Hollywood faces, but — especially chock full this season – the appearance of many a soon-to-be familiar Hollywood figure, including eventual royalty like the aforementioned Neeson, Viggo Mortensen and Benicio del Toro, and – on a lesser level – soon to be established character actors like Laurence Fishburne, Bill Paxton and Brad Dourif.

Already being phased out during Season 2, and now seemingly gone for good (one can only hope) are most of the lighter (supposed) comic-relief elements, such as Crockett’s pet alligator “Elvis” he keeps tied up on his boat that invariably frightens whoever is visiting, and the insanely racist, step ’n’ fetchit black street Noogie character (though leaving behind his quick-scheming, petty criminal counterpart Izzy, played with enjoyably smarmy Latino panache by Martin Ferrero, a character who might skirt the line of offensive stereotype, but remains amusing nonetheless, with his often lurid, conman enterprises bringing one of the almost weekly lighter joys of the show that actually work).

Yes, with its old school 80’s style, and admittedly limited performers (not to cast aspersions but, has there ever been another huge hit of a show that hit the cultural zeitgeist on such a level like this where so much of the cast – other than, say, Johnson and Olmos, neither of who burned up the screens either with their chances — went on to such little success afterwards? I mean, last I heard Phillip Michael Thomas had replaced Dionne Warwick as the voice of a television psychic hotline, and that had to be twenty years ago already), you could argue it’s only value is as a silly relic… but I’m not in that camp at all.

Along with contextually, seeing how much it stood apart from the television of the time and shifted the landscape, but on the simple level of how daringly dark some of the episodes go (with some pretty heavy endings, even if Mann’s more surprisingly experimental ones, so prominent in Season 2, are conspicuously missing this go around), “Miami Vice” Season Three stands up well. It’s a little silly at times, yes, but for television back in the day, it’s got more than enough tragic resonance, pathos and flashy filmmaking to keep things interesting.

And if the season ever started to show any signs of the desperation that would lead to the ‘jumping the shark’ storylines to come (apparently much more prominently as the ratings continued their downward trajectory – for a show remembered as being so explosively influential, it barely had two seasons of top viewer ratings), it was in the two completely eye-opening and unexpected episodes near the conclusion. 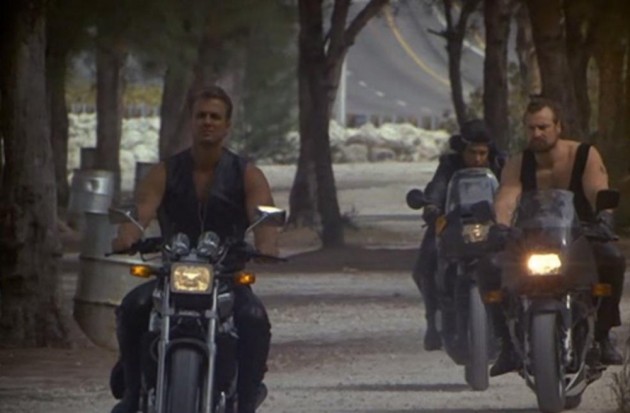 With one of them, the surprisingly wildly titled “Viking Bikers from Hell”, co-starring Italo exploitation fare regular Reb “Robowar” Brown, ex-porn star turned quasi action star Sonny “Predator” Landham and ex-NFL nutcase John Matuszak as a crazed biker gang carrying absurdly large weapons, riding around what feel like almost apocalyptic landscapes, it plays as some kind of enjoyable riff on Enzo Castellari’s 1990: The Bronx Warriors, and the other, Everybody’s in Showbiz, following Crockett’s determined attempts to keep alive a theater group of ex-cons that includes the wild-eyed NY-underground playwright Michael Carmine (who would in real life be burned out and dead by the age of 30 due to AIDS), as a sweaty crazed heroin addict who can’t escape the life, plays out like some kind of immersion into NY underground theater life with Sonny suddenly finding the ‘arts’ as the thing most of all to protect in the world, are so off-the-cuff fantastic I dare deem them as fairly brilliant season concluding flourishes.