That cop draped in pink pastel wearing the 24-hour shadow Sonny Crockett (Don Johnson) and his convinced-he’s-one-slick-son-of-a-gun-partner Ricardo Tubbs (Phillip Michael Thomas) are back and I, for one, am glad to hang with them for another… yeesh… twenty two episodes (it’s amazing how many episodes they used to crank out in a season back in the day… no wonder TV actors at the time didn’t do movies… there was no time to do anything else!), though this season they’re making room to let the supporting little pigmies like bumbling surveillance duo Switek (Michael Talbot) and Zito (John Diehl), and the two ladies Trudy (Olivia Brown) and Gina (Saundra Santiago) (whose sole function, if you didn’t know better, was to play at undercover hookers), all actors with limitations who found themselves granted their 15 minutes, get a little more face time, including the gravelly voiced, always intense Lieutenant Castillo (Edward James Olmos), the only character dressed consistently in black (you know, to stress his mystery) who we learn was in an exotic branch of the DEA, working Southeast Asia before joining up on the vice squad. 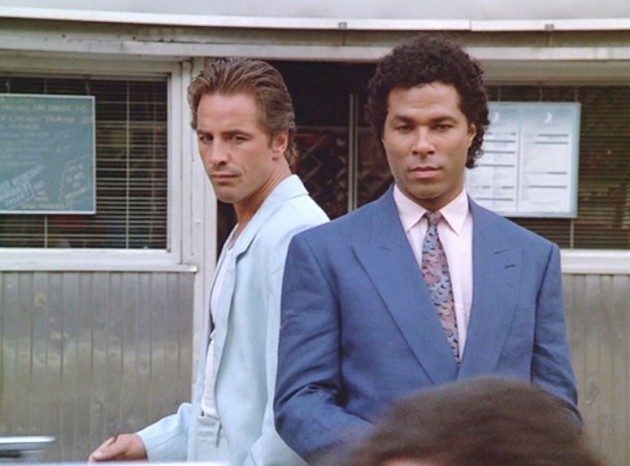 Starting with its by now familiar (though always toe-tappingly exciting, no matter how many times it plays) opening credits sequence celebrating the glamor and wealth of Miami (with that naughty weekly sight that always cracks me up no matter how many times I see it, of the Jan Hammer score’s electronic drum beats perfectly matching with the bouncing breasts of a well-endowed scantily clad female passerby), the two hour season premiere (well, 96 minutes without the commercials), most of it set in New York (yet somehow managing to still push an art deco look) with cameos all over the place, by the likes of magician Penn Jillette, entertainer Peter Allen, returning blaxploitation legend Pam Grier, Charles Dutton and Poltergeist II skeleton-thin creepy guy Julian Beck (because he was actually dying of cancer at the time) playing a powerful, corrupt and morally shameless corporate executive (is there any other kind?) — and wasn’t that the late great Ms. 45 Zoe Tamerlis herself jumping in that car smoking a cigarette? (yup, it was) – and the return of a Phil Collins’ musical montage (with another great song, “Take Me Home”)… oh yeah, and did I mention Gene Simmons as a high-wheelin’ drug dealer partying on his Miami yacht… saw season two get off to one rollicking start, that’s for sure.

Having worked out a bunch of the goofier kinks (though far from all of them), such as toning down the sillier elements (such as most of heavy gesticulating black comedian Charlie Barnett’s inane, jive-talking, street hustling ‘Noogie’, who makes Antonio Fargas’ heavy-pimping Huggy Bear from the 70’s cop show Starsky & Hutch in comparison seem like a sensible consideration for a NAACP positive role model award), the first half of season two is some fairly gripping 80’s television, with lots of intense episodes dealing with unfortunate souls getting caught up in shady areas of drug life (which often includes getting used up and spit out by the detectives as well – with the associated guilt that comes from it on Crocket being one of the recurring themes) and bittersweet conclusions (with one of the admirable recurring hooks of the show becoming its ambiguous endings, with the filmmakers confidence growing to the point of going for some really ballsy experimental levels at times). 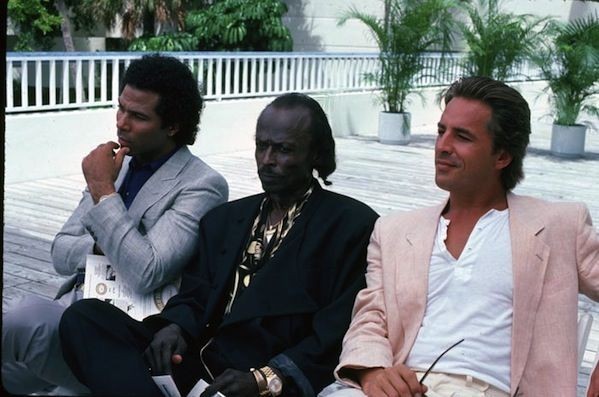 The special musical guests shtick is even more impressive this go around, with cameos and guest starring parts from the likes of smoky-voiced jazz legend Miles Davis (!), Phil Collins (guess he had some time off from supplying all those amazing tracks for the show), the aforementioned Kiss’ Gene Simmons, David Johansen, the wacko right wing rocker who thrives on getting all the neo-lib do-gooders’ panties into a bunch, Ted Nugent, the brilliant composing intellect Frank Zappa (another ‘!’) and lots more.

The simple 80’s tv-style acting may take a little getting used to, but those wild MTV musical montages, in which the show manages consistently to paint these dark emotions and events through a sublime merging of image and sound, remain the greatest achievement of the show (the William Friedkin Cruising inspired episode that ends on a leather-clad biker crashing through the front door of a multi-million dollar home to save Tubbs from a crazed suicidal female artist/lover from burning him to death before she commits suicide, all to the driving beat of John Lydon’s Public Image Ltd. “The Order of Death” is perhaps the greatest of them all).

The early Abel Ferrara-helmed episode dealing with Trudy (Olivia Brown) going undercover as a hooker (kicking in with a powerful montage detailing her making herself up in extreme close up shots — turning her into a series of body parts to be studied), eventually becoming an exploration into her trauma after she has to kill someone is a really good one (though of course the show always has the girl cops getting emotionally traumatized by doing in a bad guy, while for the boys, it’s like eating a sandwich). The Don Johnson-directed Vietnam episode (with tons of music from The Doors!) is intensely written. 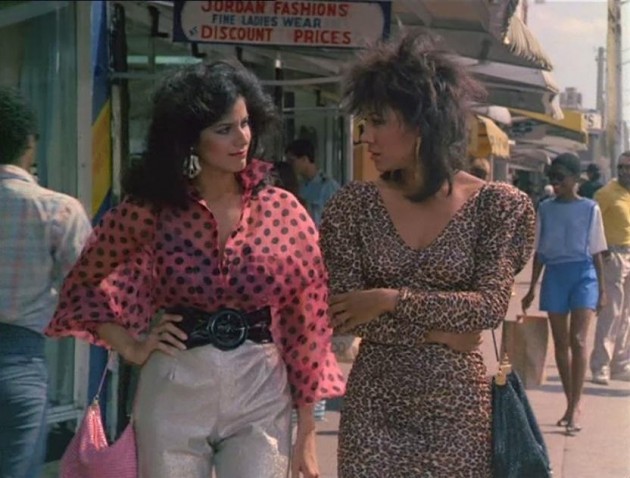 It was during the second half of the season, though, where I felt it started to lose a bit of that mojo it had originally conjured up. I was thinking perhaps there was only so much that they could do with this acting cadre. Johnson isn’t bad and certainly has engaging star-quality looks – but with Thomas’ limitations as a performer, already pretty apparent from the get-go, and with it almost starting to feel like he begins coasting a bit, as if thinking “Yeah, I got this” with perhaps a little too much confidence and way too little depth (especially in a few of those later episodes in which he takes more of the driver’s seat in the narratives), my attention was starting to wandering – right through most of the surprisingly unexciting season finale.

And then, as I should have known, it happened. The last musical number of the year kicked into gear, with old rival Calderone’s son (played by a wilder than usual John Leguizama), blowing up the mother of Tubb’s child in a car right in front of him (catching his slow motion horrified reaction), leading to a spectacular shoot-out and a wild series of further slow motion explosions… and I felt the equilibrium re-established… all was right with Miami Vice again.