Marriage of the Blessed

Marriage of the Blessed (1989) can be seen as part of Mohsen Makhmalbaf’s productive early-middle period, coming after his first three films which suffered under the weight of filmic inexperience and crude Islamic Fundamentalism (Nasuh’s Repentance 1982, Seeking Refuge, and Two Sightless Eyes 1983). Marriage of the Blessed is in the tradition of the anti-war/soldier-adapting-to-civilian genre (if it can be called that), where the William Wyler’s The Best Years of Our Lives (1946) would be one of the paradigms. (However, a recent film which bears a more striking resemblance to Marriage of the Blessed is the Yugoslavian Pretty Village, Pretty Flame by Srdjan Dragojevic, 1996.) Along with the 1985 Boycott, Marriage of the Blessed marks the beginning of Makhmalbaf’s most formally adventurous and varied period, giving life to outlandish formal touches in terms of wide angle lenses, moving camera shots (characters fastened to the dolly to render a vertiginous sensation which works especially well here), dynamic use of background/foreground, and bold transitions from color to black and white and present (1989) to wartime (the Iran-Iraqi war of 1980-89). 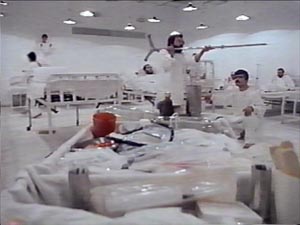 Mahmud Bigham plays Maji, a wartime photographer who returns to civilian life shell shocked by his battlefield experiences; the intensity of which is transmitted clinically and forcefully in the film’s longish, opening pre-credit scene. The film begins with the camera behind a hospital tray moving forward through a corridor; the long take movement is followed by a series of cuts which take us into the main white-padded room housing the war veteran casualties, who move about as if theatrical performers playing lunatics in the proverbial madhouse. An inmate’s scream of “Holy Martyrs” prompts a flashback to a battlefield explosion. The inmates move about choreographed as if in battle, with hospital blood poles sported as rifles and tin pots as helmets. A recurring surreal flashback image has a typewriter in the extreme foreground of a desert battle setting, with hands frantically typing away while an army convoy strides forward from the extreme background. Haji, lying wounded on the ground, moves to caress an arm, which, when the camera reframes to the left, reveals to be separated from its body. A further reframe captures the armless torso squirting blood from its shoulder. 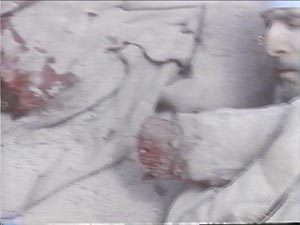 In contrast to the film’s long takes, there are moments of Eisensteinian montage, perhaps alluded to directly with one “Strike“-ing shot taken behind a wagon wheel [30’00”]. 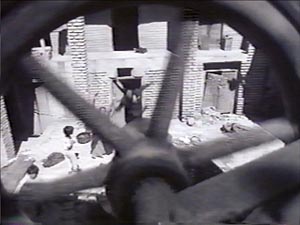 The film’s aesthetic stretches from clinicism (the hospital scenes especially) to poeticism (the scene where his fiancée walks into a room carrying a plate of pomegranate seeds, and is frightened by a pigeon released in front of her, causing her to spill the tray and trigger a ‘subjective’ match cut to a bomb (the match on the action of the splash and the red color matched to blood).

Haji’s pre-wartime fiancée Mehri tries to acclimatize Haji to civilian life by plastering his room with happy family photos, but instead Haji gravitates toward watching old documentary footage of famine victims in Africa which links up to his recent world-wide concern for social poverty, specifically in Afghanistan [a sub-theme which echoes Makhmalbaf’s later interest in the country, with Kandahar (2001) and The Afghan Alphabet (2002)]. He tries to adjust by returning to his newspaper job, but retains his social commitment by only taking photographs of social injustice and poverty, an act which angers his newspaper editor. These middle scenes are handled in striking montages of black and white shots, flash bulb lighting, aggressive-intrusive shots on the homeless that suggest a near documentary quality. The scene is made even more political –and autobiographical– because Haji’s fiancée Mehri (Roya Nonahali) is also taking photographs (just like Makhmalbaf’s wife was helping him make this film).

This reflexivity is brought into the fore at the end of this madcap ‘reportage’ scene when a police crew arrives and ask Haji and Mehri:

“What are you doing?”
They respond, “I am doing a reportage.”
“At night?”
“We prepare documentary photos for a television station.”
The police continue, “And the lady?”
“She is my wife.”
The police ask another question: “What are they doing back there?”
At this point we hear the voice of Makhmalbaf, who replies,
“We are making a film.”
“What film?”
“Marriage of the Blessed.”

While the police ask him for authentification he tells his crew to continue filming. Here Makhmalbaf is beginning the stylistic element which would mark his later style: breaking barriers between fiction and non-fiction. Like the reportage moments intruding on the homeless, is this moment authentic or staged? Have the police in fact actually happened across the film crew? (I think they did.) We clearly see (although it is night time and dark) the film crew, a camera dolly, etc., although this would of course have to be staged too, a la Man with the Movie Camera). Were the police addressing the characters or Makhmalbaf? In a sense the question does not matter because both the fictional characters and Makhmalbaf were in fact doing the same thing: recording social action and articulating art as social action. This is suggested in the text with the next meta-question we hear. We hear (we assume) the officer ask, “What’s a documentary?” Makhmalbaf replies, “Recording whatever there is.” To which the officer replies, “There’s nothing here! You and the lady follow me.” To show a streak of dark humor and social critique, when the police leave the scene the camera, now behind a phone booth, reveals two thieves who were hiding in the phone booth, rise into the frame and continue breaking open the coin depository (which raises the issue of the police’s function: were they there merely to stop art/the artist and not the thief/thievery?).

The reflexivity continues in the scene at his editor’s office, who examines his scathing series of social snapshots, and reflects, “You can’t solve social problems with a couple of photographs.” Contrarily, this is something the editor clearly believes in when we later learn that the only photograph he runs in the newspaper is of an innocuous sunflower, a photograph which Haji took merely to distract a police officer. The question becomes another in the long line of meta-questions which is addressed as much to Makhmalbaf –who clearly feels that art can enact social change or at least social good– and to the audience/critics. This whole middle ‘reportage’ scene, from the point of view of a committed revolutionary, is one of the most potently political in the film. Haji’s camera eye, as one of his war veteran colleagues says at one point, “…is the anxious eye of the revolution.” Clearly Haji does not like what his camera’s eye is seeing, these images of the poor, the downtrodden, and the homeless, and people forced into petty crime. Is this what the Iranian revolution has brought?

The running social commentary continues in the next scene, Mehri’s photography exhibit, which prompts a gentle discussion on what function a woman’s art exhibit can play in Iranian society. A reporter with a microphone asks Mehri “What did you try to express with this image?” and other female friends “Why do only men visit an exhibition of the theme of women?” None of the woman asked give a straight answer. This latter point, which depicts most Iranian civilians in a negative light (uncaring to veterans, busily looking for profit schemes, etc.), would clearly have made the film controversial with the Iranian government. As would Haji’s conduct at his own wedding, which he gleefully sabotages with a satirical speech which he gives atop a balcony, framed like a dictator. His speech starts off amusing [“Guests with mismatched socks are welcome. Guests with mismatched cars are welcome. Guests with mismatched wives are welcome”] and then turns aggressively political [“Eat the robbed food from the poor. Robbed food is delicious. Robbed food is delicious!”] He begins to recite the sentence repeatedly as if it were a political slogan worth repeating. [“Robbed food is delicious.”] The wedding crowd gets so wrapped up in his mantra that even a few of his own veteran colleagues begin to raise their arms and yell out the slogan before realizing the ludicrousness of the situation. The satirical moment reveals the insidious and unthinking nature of sloganism. 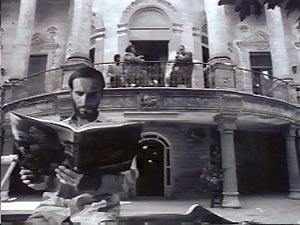 The film ends ambiguously, with Haji back in the sanitarium. Mehri visits him to say that her father is worrying about him. Haji replies, “He will defeat the revolution from the inside,” a stirring indictment of what a disillusioned Makhmalbaf thinks about the road taken by the revolution. Haji escapes the sanitarium and phones his fiancée Mehri. Haji loves Mehri enough to be willing to sacrifice her so she does not jeopardize her life for him (Mehri’s family is dead set against her marrying him.) He leaves the phone booth. Mehri runs out in search of him amid the busy streets of Tehran. The scene then combines the present Tehran with Haji’s mindscape of the war fields, with the now omnipotent shot of the typewriter at the foreground of the battlefield. The gimmick of the tapping keys melding into rifle shots is a wonderfully nuanced, loaded metaphor for how the written word, whether in propaganda slogan, poem, or agit-prop, is as powerful as a bullet; recalling perhaps the famous Third World cinema slogan, a projector/camera is like “a gun that can shoot 24 frames per second.” 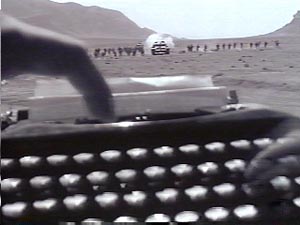 Both Mehri and Haji’s progress through the crowded city is intermittently halted into a freeze frame, a wonderful touch that unites them infinitely: photographers photographing themselves, implying that she is still ‘in his eye,’ just as he is still and will always be ‘in her eye.’ The final wide shot of Tehran, with war sounds overlapping into the calm cityscape, is disarming precisely because of its calmness.