As I wrote in my recent musings on The Road Warrior (aka, “Mad Max 2”), the second in the high-flying, adrenaline-fueled post-apocalyptic road saga we all know and love (or should love… at least the first two entries… hint, hint), I had the distinct impression as that film concluded (and as I pontificated on about, post-screening, to barely listening ex-wife and daughter) that this should have been where it all ended; with the first entry introducing us to the dedicated road cop and transforming him into vengeance-seeking shadow of a human (due to loving wife and child being brutally killed by marauding biker gang), the second the tale of the reclamation of his humanity (saving a small community of last survivors along the way), with all of it concluding in near-perfection on that final image of our leather-clad, reluctant hero, alone amongst the fire of the wreckage-strewn highway, fading away into the ethereal embers of a child’s memory, directly on into legend and lore… and that would be it. The tale of “Mad” Max Rockatansky (Mel Gibson, whose growing maturity as a full-fledged screen presence over the two films couldn’t have been more in synch with the character) would have been, right there and then, forever and satisfactorily complete; a modern cinematic legend achieved.

And sitting down and taking in Beyond Thunderdome for the first time since its release (and promptly mostly forgetting it), I came to the conclusion that my misgivings about a continuation were… well… pretty right on. Mostly, anyway. 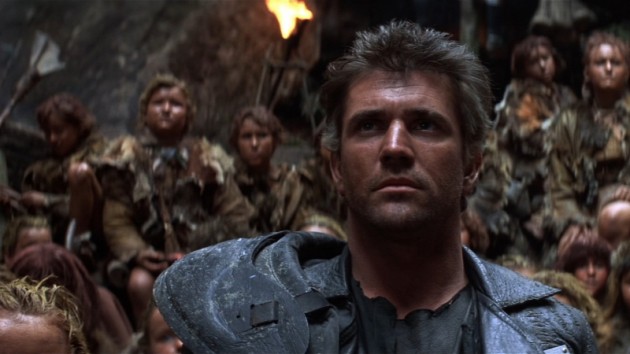 The episodic narrative of “Thunderdome” is broken into three distinct sequences. The first follows our Mad-man Max, he of few words, on a mission to reclaim his vehicle, stolen in the opening moments by makeshift plane-flying Jedediah (Bruce Spence, with the actor in a slightly confusing return from the previous entry – a different character but with pretty much the exact same comedy relief description, as likeably sneaky pilot) and his son (Adam Cockburn) from where it ended up, namely, the barbaric Wild West-style outpost known as Bartertown (and right out of the gate, with the very first lazily executed action piece of Jedediah jumping from the plane to land easily in a seated position on the vehicle below… the first red flag was raised. Pfft! I mean, come on! This is a “Mad Max” movie, for God’s sake, whose very raison d’etre is achieving excitement through stunts that actually put human life at risk — or at least give us the impression that’s what they’re doing – and not through simple camera trickery — and even worse, in this case, not particularly convincing trickery).

Our hero is forced to maneuver – dangerously — between the divided rulership of the ruthless Aunty Entity (super-singer of the time Tina Turner, whose major star quality, alas, doesn’t translate into the villainous lead in a barren dystopia – I mean, even the 80’s headdress, tight skin garb and sex appeal don’t hide a lack of presence, for instance, in what was supposed to be her great moment, delivering a fervent, crowd-swaying speech to the town’s thuggish minions) and the fascistic dwarf-giant bodyguard tandem know as Master Blaster, who own the community’s electricity through the pig feces refinery they run, leading Max to a duel to the death with the hulking section of the duo, the one known as Blaster, before the rabidly cheering throngs in the enclosed fight-arena known as… yes… Thunderdome (from which of course the film gets its colorful, WWF-reminiscent, if nonsensical, title) all leading to, alas, the first noticeably underwhelming large-scale set-piece of the film (with Max and Blaster forced to fight on these awkward bouncy bungy cables that mostly slow down and limit the choreography). 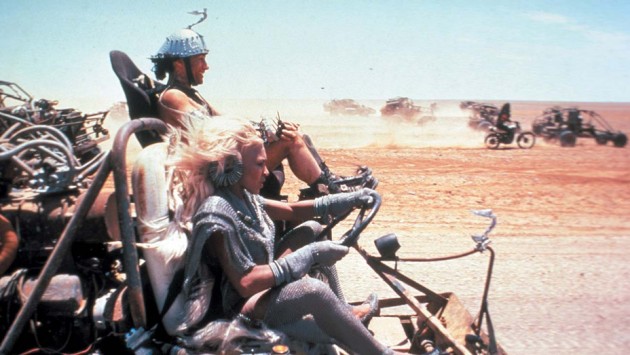 The second finds Max expelled into the desert by Aunty, tied backwards to a horse, with a massively oversized clown face forced over his head (a broad stroke that, like so much of the film, misses its mark and comes across as forced rather than boldly inspired) wear he manages to stumble across a Peter Pan world of children living in an oasis, waiting for the return of a hero (who they naturally believe Max is) – and if there’s any question on the connection to the fable of the little boy who learned to fly, the little munchkins have named the future world of their imagination that they pine for ‘Tomorrow-morrow Land’. It’s also in this part of the film where the lack of casting coups that were such a high point for certainly the second film in the series shows through as well (let’s put it this way – there’s no unforgettable Feral Kid amongst this lot of bland faced, far-too healthy-looking brats).

Now, it’s not that there aren’t things to like throughout the film – there are – it’s just that, overall… the entire effort suffers from a noticeable lack of inspiration (as if Aussie filmmaker George Miller, the celebrated man-behind-the-Max, was as reticent to continue on with the series as was his hero in saving that community in Road Warrior, illustrated not only by the four years it took to get him to actually do it – all while you had to imagine the greedy studio breathing down his neck for another Max film after the huge international box office ka-ching of the The Road Warrior — but that he brought aboard a co-director to help boost up his flagging interest, another George, this one named Ogilvie); it’s right there in the post-apocalyptic worlds that Max stumbles upon, which while remaining enjoyably cartoon-ish, no longer have that extra sense of grit, of feeling actually inhabited by real characters, as strange as they are. It’s in the costume design, which while still eccentric and somewhat amusing, no longer has the clever underlying ideology, or focus, that you could imagine would have – or a filmmaker on the ball would have imagined it to have — developed over time under such lawless conditions (oh, how I miss Wez’ open-ass chaps, part of the previous entry’s enjoyably leather kink, homosexual flair).

In fact, some of the garb and headdress choices seem… well… a bit juvenile, with the vision for the film shifting towards a younger audience; in fact, the whole enterprise gives off the distinct impression of a concerted effort to be ‘softer’; moving from the intense adult action material with which Miller and company thrived, towards less interesting Spielbergian, fun-for-all-ages’ action adventure territory (and, keep in mind, I was already thinking that even before the kids from Peter Pan show up in the second act – at moments such as the attempted comic bit of Max ending a fight in Bartertown by shooting the headdress off a suddenly helpless-looking marauder – a riff stolen – quite openly and shamelessly — from Spielberg/Lucas’ Raiders of the Lost Ark). And, again, the action set-pieces (fewer and far between) don’t capture anywhere near the eye-popping, breathless excitement that the original films did (especially the greatest of the lot, the second entry, The Road Warrior). 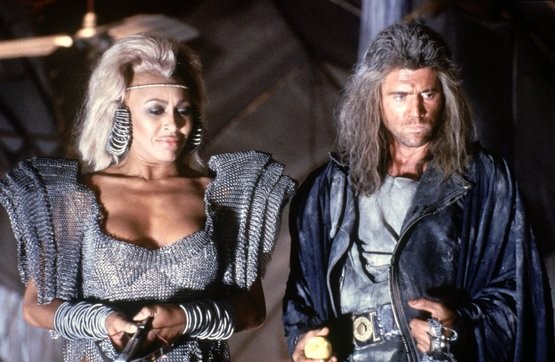 Fortunately, though, the ending sequence of the film does lead to the one real extended roadway chase (which thankfully makes up just about the entire third act) and it’s by far the most compelling sequence of the film. Following those wonderfully wonky, weapons-loaded futuristic vehicles racing precariously through the barren outback trying to knock each other off, with various crazy people jumping across vehicles at insanely high-speeds, seemingly mere inches away from getting sucked under the tires and pasted along the landscape, it’s nice to see Miller and Company regain some more sure footing (though even here, the overall impact doesn’t quite achieve the same level of death-defying spectacle, with some stunts achieved again – eegads! — through camera trickery, rather than – you know — nearly killing the performers).

Mel as Max has also continued to transform… but this time not in the good way; with his own growth as an actor skyrocketing in sublime symmetry with that of the character in the first two films — eager and young newbie in the first, into the more polished professional now understanding the raw cinematic power of his physical presence of the second – Gibson’s fat-cat status at this point as blockbuster superstar starts to show through. He certainly remains a watchable enough performer (even with that silly perfectly quaffed 80’s long-haired ‘do early in the film), but there is a disconcerting sense of the actor going through the motions, with his ‘few words’ registering as indifference rather than the previous inner turmoil. Like the rest of the film, Gibson (and Max) have gone soft.

It’s not that “Thunderdome” is a bad film. No, it’s watchable and fun enough. It just doesn’t continue the high-flying, wildly inspired trajectory of Miller’s previous efforts with the character Gibson manifested so unforgettably. They shoulda ended when they were ahead… and, to be fair, judging by the results, it feels like they all kinda felt the same way.