After re-watching Fritz Lang’s much-celebrated child serial killer German masterwork (and early forerunner to the film noir movement of the 40’s and 50’s) M (1930), I figured it was as good a time as any to finally catch up with the barely acknowledged 50’s remake, with the story transplanted smack dab in the middle of the American noir landscape, bearing the same lettered title (though, as with much of the B-movie sensibility of the remake, the meaning of the titular ‘M’, placed as a condemning mark on the unwitting child killer’s back, is now literalized as standing for ‘Murderer’), though, to give credit where it’s due, the inspiration to watch them together came from their recent pairing as part of the Films Noirs, Films D’angoisse series at the Cinematheque Quebecoise that I missed.

While the remake doesn’t reach anywhere near the cinematically iconic stratosphere of the quasi-expressionistic, deeply influential original, it is a fascinating and rewarding viewing nonetheless, not the least being it was directed by Joseph Losey, a filmmaker whose work I’ve been catching here and there along my screening trails. I have to say, having now seen a growing number of his films — everything from most of his 50’s American noir films, to his post-Hollywood blacklist British Harold Pinter adaptions showcasing the profound sexually repressed brilliance of Dirke Bogarde and on to the fascinating nuclear war scare cult sci-fi film about children affected with radiation he made for Hammer called These are the Damned, I’m recognizing more and more how criminally underrated Losey is (and, at the least, worthy of my own personal digging in of his work at some point – perhaps when I’m finished with my Cheech and Chong and Halloween franchise retros). Even with M, a film clearly meant as a second feature noir pot-boiler, coming in at a quick 74 minutes or so, he manages to imbue the film with a dark life all its own. It’s fascinating to watch them back to back, to see two quality filmmakers with vastly different approaches (at least at the times the films were made, as Lang would eventually come around and play brilliantly in the 50’s American noir playground as well) under entirely different settings (both geographically and film industry-wise) approach the same story.

The remake moves the setting from the dark, shadowy streets of a Berlin that feels more like a city of our imagination, or of one long gone, to the sunnier, more familiar climes of urban Los Angeles, yet still manages a toughness and a paranoid streak to the world view. Gone are the bombastic orchestrated moving shots and the great radical, expressionistic camera angles from the original (as well as much of Lang’s obsession with circular imagery), replaced with a style that’s more traditional (and budget minded), yet provided by a filmmaker who, as with the best of so many of the directors working in that genre/style at the time (and under those constraints), understood how to keep things involving and interesting through thoughtful camera placement, as well as character movement and dynamics (and good casting, of course). Saying that, though, Losey does here and there duplicate some of the shots and ideas of Lang, such as the initial shadow image presented of the killer, evocative views down long empty stairwells and smoky rooms filled with contemplating male authority figures (and he works them well enough, as they feel organic to this more current telling). As with the original, the cops remain equally a step behind the criminals in figuring out the identity of the killer, allowing for the kangaroo court scene, which plays out quite differently, yet also effectively in the remake. 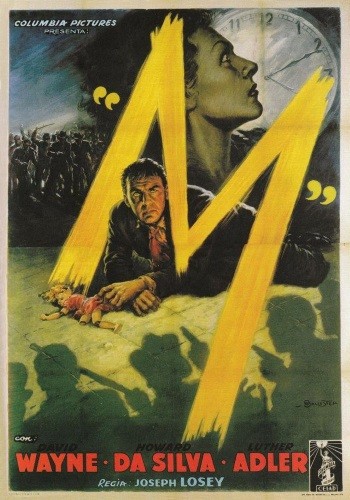 There are obvious capitulations to an American audience of the 50’s, including seeming censorial ones (the fact that it’s specifically pointed out in the news report that no sexual violation was done to the murdered children smacks of a Hays Commission requirement), as well as specific plot revisions designed to ‘focus’ and literalize the narrative. While these decisions make the film’s overall ambition far less grandiose than Lang’s near-mythic vision from the original, the remake still shines as a startlingly perverse noir film of the 1950s. Adding motivation, for instance, to the drunken, emotionally anguished lawyer who ends up forced to defend the desperate, pathetic child killer against the witch hunt rabble is a nice stroke, allowing him to redeem himself in a nicely delivered speech… as he ruthlessly condemns himself, his killer mob boss and the child killer. The film could have done with a little less of the easy ‘blame mommy’ Freudian concept taking cinematic hold at the time in providing motivation – and explanation – for the child killer’s terrible actions (though even the original film hints at it with the camera lingering on a photo on the Lorre character’s mantelpiece where an image of mommy looks out at him) and the device of having our killer being fetishistically attached to his flute as an instrument for expressing his perverse desires is more than a bit forced (where the simple whistling in the original works like a charm).

The cast of police and gangsters are peppered with many of the wonderful, always welcome presences of the studio character actors of the day; there’s Raymond Burr (only a few years away from donning white hair as the killer under the consistent voyeuristic glare of binoculars in Hitchcock’s Rear Window) as the deep-voiced second in command of a motley mob gang made up of more familiar faces, including Norman Lloyd (who’d already been a very bad man in a few Hitchcock films by this point), the always creepy Glenn Adler (who had already upped his snarky speech patterns to determinedly absurdist levels at the direction of Orson Welles for Lady From Shanghai) and the frightening Napoleanic figure of Walter Burke… and that’s just naming a few (okay, I’ll also mention Jim Backus, as the always opportunistic city mayor feeling the pressure to calm the city, many years before being castaway on an island with Gilligan as that millionaire America briefly loved, Thurston Howell III). The real standout star of the film, though, is David Wayne as the child killer. Like Lorre, we follow him (though Wayne’s character is kept in the dark longer, unsurprisingly trying to play up the mystery angle more than the original) through his anguish, as he’s drawn inexorably to his dark deeds, but it isn’t until the final scene, in which he pleads desperately for his life (and also to be punished, which is what he wants just as much) before the hysterical rabble that wants to string him up. Wayne, a notable comic character actor with little experience playing darker roles, delivers a finale almost as powerful as Lorre’s, with a character dripping with anguished self-loathing and it’s fascinating to compare the two performances. As with Losey himself, it’s a shame Wayne isn’t more celebrated for his role in a film that may not be as great and deservedly recognized as a milestone of cinema (by a filmmaking legend) as the original, but should rank higher than it is, at the very least on the B-movie noir landscape.