I missed the nicely done pairing by the Cinematheque Quebecoise (as part of their Films Noirs, Films D’angoisse series) of Fritz Lang’s much-celebrated Berlin-set child serial killer masterwork (and early forerunner to the film noir movement of the 40’s and 50’s) M, with its little seen, yet intriguing nonetheless, remake (it was directed by Joseph Losey, after all, a director who the more I see of his work, the more I realize how criminally underrated he is), made twenty years later and transplanted at the height of the film noir movement, to Los Angeles. So I decided to catch up with them both at home on my home projector system, leaving me vulnerable to distractions perhaps, yet safely ensconced in the dark comforts of my Sanctum Sanctorum.

Watching M again, with its riveting and flawlessly executed movements between a documentary-like approach, soberingly detailing the concerted efforts of both the police and the criminal underworld (with the former under increasing political and public pressure and the latter growing more disturbed at the growing police presence into their underground dwellings in search of the perpetrator), and a fantastically expressionistic, paranoid perspective of shadowy urban streets where the killers of children may lurk around every turn (when the camera isn’t restlessly moving through windows and up walls, its capturing ominous shadows and radical perspectives, creating all of those stylistic motifs that would serve Lang so well after escaping Nazi Germany and setting up shop with his own brilliant noir work in Hollywood), it reminded me again just how fully developed the formal art of cinema was (and how mature the early masters of cinema like Lang really were). With their only real seeming hindrance being the bulk and inflexibility of the early equipment, the efforts at (and understanding of) capturing mood, expression, emotion and psychological states through camera (movement and, at other times, simple carefully composed montages of stills) and sound is all there, full force. The later great filmmakers might have elaborated on the aesthetics (and been granted greater flexibility with the developing technologies), but these guys understood cinema right from the start.

It’s Lang’s first film utilizing sound (well, a 1/3 of the film used it anyway) and, similar to Hitchcock (with, for instance, Hitch’s celebrated dinner scene and that ‘yadda yadda – knife – yadda yadda – knife! – yadda yadda – KNIFE!!’ conversation overheard by the girl consumed with guilt in his 1929 breakthrough Blackmail), the great German and well known madman revealed himself as a brilliant craftsman, immediately recognizing not only inventive ways to use the new device (including by creating the now familiar and oft-used motif of the off-screen killer whose presence is established by the tune he constantly whistles) but how to strengthen intrigue with a corresponding stripping away of sound, a choice that often charges moments with a more pronounced sinister quality and intent, especially those of the criminals quietly and methodically stalking the child killer they have now recognized.

Riffing again on Hitch, the closer I look at Lang’s work, it’s hard not to notice a similar preoccupation with circularity. With Hitch, it’s everywhere from the very opening close up shot of the spinning tire of the fast riding getaway car in 1929’s Blackmail to the swirling animation representing Jimmy Stewart’s anguished vertigo in the 1958 film named after the disorder, often considered Hitch’s masterpiece… and it’s all over Lang’s M (from the opening of the childhood game calling out a killer with a girl in the center, to the criminal looking up through the hole in the ceiling above he’s created). While I can’t say I know for sure what this particular visual motif represents for either artist (a sense of enclosure? A spinning into entrapment?), it’s given life in so many clever and visually inventive ways by both of them it manages a resonance through sheer repetition. 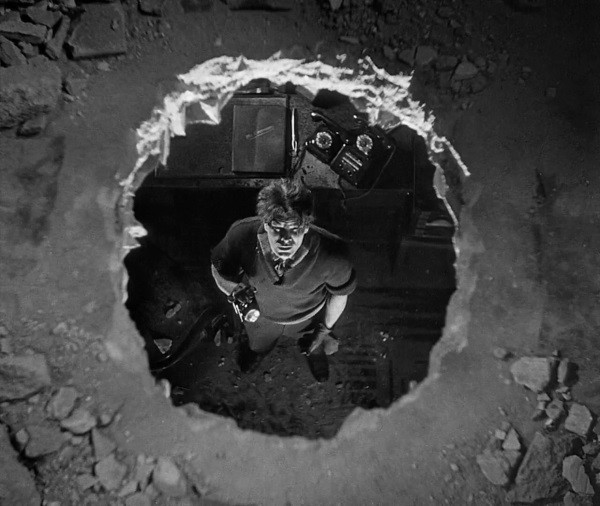 Watching M, I’m in awe of the amount of demanding effort it must have required to achieve this many bravura shots; perhaps it required the raving mad, task master like Lang purportedly was to push a crew past the breaking point to accomplish. Lang’s roving camera climbs walls and pushes through closed windows with as much brash brilliance as a filmmaker like Dario Argento would be celebrated for doing fifty years later… only Lang did it without the luxury of a Luna crane!

With his final desperate pleadings before the underworld kangaroo court, Peter Lorre delivers a maniacal, anguished, eye popping performance that is both overtly expressionistic and deeply emotionally honest. It’s worthwhile for modern audiences, often dismissive of early theatrical acting as old-fashioned, to see a performance like this, if just to witness how, when done right, it can create not only the same power and rawness as any modern ‘naturalistic’ style, but add something larger than life, iconic – almost mythic in nature. Lorre’s so perfect in the part it’s not surprising it catapulted him into fame… nor that he was never able to crawl out from its all-powerful shadow.