One-time convict “Brick” Tenant (Henry Fonda), now an honest cabbie, gets mistakenly fingered on the eve of his marriage, along with his equally innocent friend just out of jail, by the witnesses of a murderous bank robbery. With political pressure from above to catch whoever committed the crime, Tenant’s fiancée (Maureen O’Sullivan) watches in horror as the two men get railroaded through the system, with the death penalty looming at the end.

I’ve been intrigued by German ex-pat director John Brahm since viewing his dark and gripping noir-style serial killer films, made in successive years, starring that wild eyed and unforgettable character actor Laird Cregar, The Lodger (1944) and Hangover Square (1945) on the format du jour, VHS, as well as, soon after, catching his The Mad Magician (1954) as part of a 3D series at NY’s Film Forum (a film I admittedly remember little of, other than the warm feelings attached to any horror film starring Vincent Price). Noticing those occasions when the director’s name popped up in the credits for various episodes of genre TV series classics “The Twilight Zone”, “Outer Limits” and “Alfred Hitchcock Presents” has kept the interest alive. So when I did a little reading into Fritz Lang’s brilliantly realized rural crime spree road movie You Only Live Once (1937) after seeing it recently at the Cinémathèque Québécoise and discovered a quasi-remake was made just two years later, also starring Fonda, this time directed by Brahm, I figured it as a perfect opportunity to catch up to another of the director’s output. 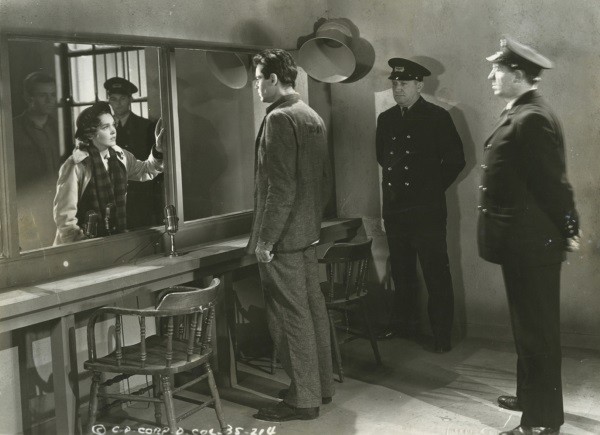 I quickly realized while watching Let Us Live that, other than it dealing with Fonda’s character being an ex-con wrongly accused, it’s far from a remake of You Only Live Once. I wouldn’t be surprised if it was due to the strength of Fonda’s performance in that film that lead to him being assigned this part, but that’s where the similarities end, at least narratively. Let Us Live never turns into the kind of spiritual anti-heroic crime spree movie of You Only Live Once, instead, it’s major concern becomes much more concrete and B movie worthy (of which this movie was meant to be), being the desperate search by Tenant’s fiancée, with the help of Lieutenant Everett (Ralph Bellamy), the single sympathetic judicial justice system figure in the film, for evidence to clear her love and his friend before they’re put to the electric chair.

While Brahm’s film doesn’t achieve the hallowed impact of Lang’s masterpiece – it’s shot much more matter-of-factly, if still nicely and moodily, and has nowhere near the profound ambitions of Lang’s work – it still is, as so many noir movies would be all the way into the 50’s (when the nefarious communist-scaring House of Un-American Commission was set up to put a stop to Hollywood’s consistent criticisms), an admirably critical and believably paranoid look at a cold, unforgiving justice system filled with judicial figures concerned primarily with political ambition and uncaring policeman, that crushes the common man, with little concern for guilt or innocence. Tenant and his pal may be exonerated at the last moment through the heroic acts of the Sullivan character, allowing a temporary sigh of relief, but the film ends on the understanding that the lovers have been forever changed, carrying forward a deep distrust and understandably paranoid view of the world and the powers that be. Who can blame them?