There’s an interesting experiment in here somewhere with the minimalist Bresson, who seemingly never found a scene he couldn’t strip entirely of outward emotion, taking on the exciting tales of Camelot and King Arthur and tangentially the search for the Holy Grail (which we learn early on — after first witnessing about 10 minutes or so of a lot of unknown men hidden behind body armor and awkwardly sword fighting, with tons of bloodletting — the Knights of the Round Table weren’t able to find and kinda half-heartedly gave up on). 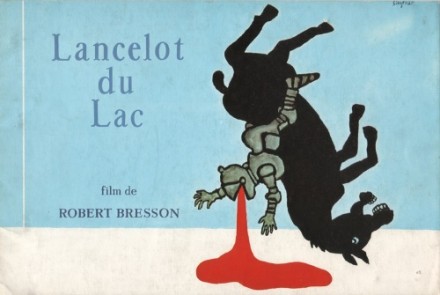 With just a dash of a comedic heart, the deliberately non-traditional editing (with things like staying just a few beats too long looking at a castle window before we learn that the characters are looking at it), the incessant loud clanking of the very ill-fitting armor the Knights rarely ever seem to get out of (I guess with Bresson trying to say something about the absurdity of war), the not very intriguing main cast of non-professionals (and for a film that some claim was providing an alternate ‘gritty and realistic’ take on the tales, some of these knights, with their flowing locks and youthful features, resemble much more posh kids of comfort then anyone suffering the dirty and stinking hardships of the Middle Ages) and the already almost comical scenes of gushing blood and broken armor between fighting knights we have no connection to, this could have been a highly enjoyable spoof of a Bresson film by way of him telling a tale that is just crying out for excitement and emotion. Unfortunately, instead, it plays out as a very odd failure.