The 1960s are often singled out as the decade that changed cinema. The suggestion is that young filmmakers armed with new, cheaper, and more mobile technology burst on the scene all over the world, more or less simultaneously, and fundamentally revolutionized how we make and how we view cinema. Such a totalizing reading of history is bound to forget a few forefathers, outliers who anticipated what would come. One such figure is Jean Rouch, a French documentary filmmaker who, in the mid-1950s, quietly expanded the possibilities of what documentaries could be. Equipped with a 16mm camera, Rouch challenged the then-dominant established norms of expository documentary, most prominently by engaging in new forms of ethnographic cinema and focusing on an observational approach. Rouch’s documentary practice evolved as a direct result of his use of new filmmaking technologies, as analyses of Les maîtres fous (1958) and Moi, un noir (1955) will bear out. 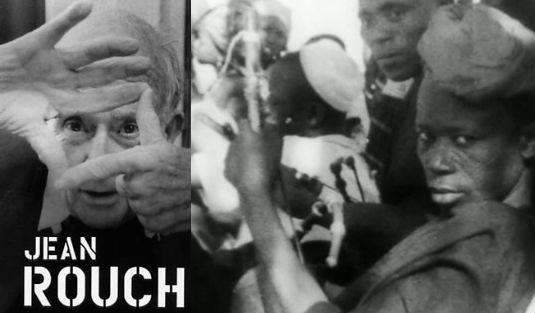 It is important to examine the working conditions when Jean Rouch started making films. Most of the filmmaking equipment of the 1950s was big and cumbersome. 35mm cameras were large and heavy machines more suited for the studio than the African cities Rouch photographs on location in Les maîtres fous and Moi, un noir. 16mm cameras, while more manageable, were also far from the lightweight cameras of the 1960s. The tripod remained a central part of documentary filmmaking.

Given these circumstances, it is no surprise that the expository mode, a form dominated by voiceover narration and the use of visuals as “evidentiary editing,” would evolve under those particular technological constraints (Nichols, 107). The sort of images the older cameras could capture, well-framed, static images photographed after a lengthy amount of set-up time, suit themselves perfectly to a mode of documentary associated with a more intellectual, distant tone. An example is Pare Lorentz’s The River (1938), whose stated goal was to educate the American public about the work of the Farm Security Administration. Lorentz’s film presents static images of chaotic events, such as overflowing rivers that appear to have been shot from a tripod from the shoreline, and an extensive use of maps and diagrams. Lorentz adds nuance to the images by using a forceful editing style and poetic narration, but technological constraints still, to a large degree, dictate the film’s visual strategy. In contrast, we can view Rouch’s formal advances as predicting the observational mode of documentary that would become more prevalent in the 1960s. However, it is not a perfect meeting of those ideals. Rouch’s occasional use of voiceover narration clashes with the new style’s purely observatory goals, as do the more participatory aspects Rouch’s own flavour of ethnography brought to the table. Still, Rouch’s films can be seen as steps towards observational documentary and away from expository modes.

By the time Rouch started making films, the technology had evolved to a more manageable level. For Les maîtres fous and Moi, un noir, Rouch used the earliest Nagra, a new lightweight 16mm camera, which allowed him unprecedented ease of movement (Georgakas, 24). The documentarist could now rapidly follow the movements of his characters without being burdened by a tripod or long set-up time. However, this was still far from the point-and-shoot era of digital cameras. The biggest constraint Rouch’s camera placed on him was a temporal one. The camera was light and allowed easy handheld movement, but only for a short amount of time. The camera didn’t have a motor, so Rouch had to pause every few seconds to crank it again, limiting the length of his takes. This is the source of Rouch’s “shared anthropology” ethos. His ethnographic cinema and its implied challenges to expository modes of documentary come as a direct result of the technological constraints he laboured under. Hamid Naficy emphasizes the place of improvisation within Rouch’s ethnographic practice, pointing to the “unplanned and improvised fashion” in which he developed his “methodologies and theories” (98). This improvisation was made possible by new technologies and the freedom they afforded, their ease of use and low prep time perfectly suited to the demands and rewards of improvised filmmaking.

With the newfound liberty of movement provided by his camera came a more direct relationship with his subjects. He could follow their actions, dance with them, share the same space. For example, in Les maîtres fous Rouch’s camera follows the erratic movements of the men as they enter inside the ritual space, sometimes even placing the camera up to their entranced faces. When a cult member crosses the entire square holding a lit torch, Rouch walks alongside him, allowing the viewer to inhabit the same space. The effect of the handheld camera is markedly different than one would get from a static establishing shot of the ceremony, or even a clean pan on a tripod. We have the feeling, through Rouch’s fast and human camera movements, of sharing the same space and existing alongside the subjects. As we move inside the ceremonial space, we extend our experiential link with the subjects. The distance created in expository modes of documentary is all but destroyed in favour of a shared space. 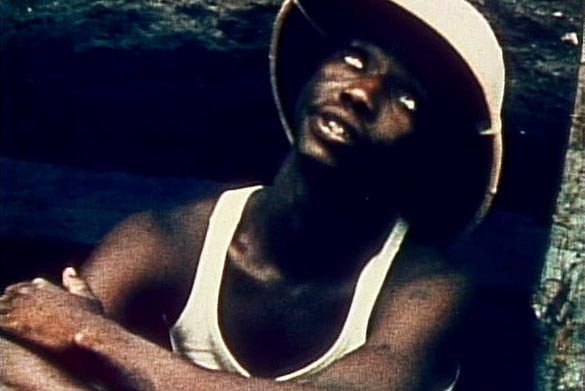 However, this creation of shared space points to a contradiction in Rouch’s work. As Brenda Jo Bright points out, a certain distance from the subject is inherent in any ethnographic project, the ethnographic spectacle othering the subject, willingly or not (184). This is where the Nagra’s technological limits become an issue. As mentioned, the ability to move the camera allowed Rouch to share the space of his subjects, but not their time. He could film them only for a limited period and this is reflected in his editing strategies. In Les maîtres fous, each shot is roughly equivalent to one action, one moment captured. This is evident from the opening sequence at the port, where one shot shows us the workers arriving by boat, followed by another of them lifting a crate, and then another of them moving grain sacks, and so on. This one shot, one action strategy is a result of the camera’s technological constraints, but can also easily be linked to the ethnographic tradition, which in turn is linked to photography, the ultimate example of the one shot, one action ethos. 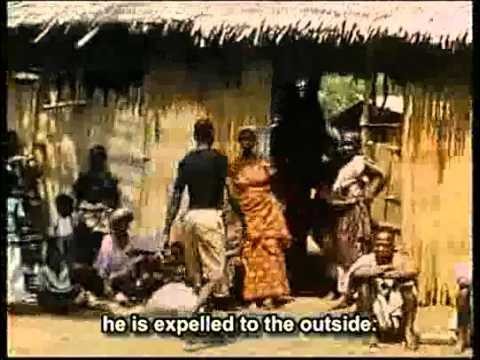 This “moving photograph” editing strategy is where the inherent contradictions in Rouch’s formal project are most fully revealed. The movements the images contain suggest a closeness to the subjects, but the short duration and editing pattern suggest estrangement. The viewer is stuck in a strange limbo, sharing the space, but not the time of the characters. However, another technological constraint allows Rouch to harness and resolve this ambivalence. Rouch’s equipment did not permit him to record synchronized sound. In Moi, un noir, Rouch solves this problem by having the subjects of the film narrate a fictionalized account of the images. Here, Rouch’s idea of “shared anthropology” begins to form. As Naficy aptly writes, this “shared anthropology” consisted of engaging “his subjects in the process of shaping the film’s ideas, plots and characters and he sought their advice and critique of the filmed footage about them” (98). This might seem antithetical to the critical distance expected of ethnography and anthropology, which generally encourage a distant critical eye over a participatory one. Rouch subverted those notions, hoping that “such engagements of indigenous filmmakers and subjects in the process would produce results that approximated the ethnographic reality more as well as confer value and dignity on the ethnographic situations and subjects.” (Naficy, 98). This subversion of traditional ethnography can also be seen as resulting from a discursive relationship to the new technologies at the disposal of the filmmaker. The new camera allowed Rouch unprecedented access into the spaces of his subjects. It seems plausible to view those changes in filmmaking possibilities as conducive to a more participatory and humanistic redefinition of ethnography. This is not to suggest a purely deterministic reading of Rouch’s relationship to technology; he was, of course, engaged in many of the intellectual discourses of the time, which no doubt had a great effect on his particular brand of ethnography, but it is important to acknowledge the role of technology within the dialectical complexities of Rouch’s oeuvre.

Les maîtres fous appears at first to be a conventional ethnographic film presenting to us another culture and its images, with an authorial voiceover lending the film scientific credence. The film pushes against those impulses in its formal strategies, in particular the moving camera transforming Rouch, with him “no longer an observer/camera but a participant who is in a form of trance” (Cowie, 181). Rouch’s participatory ideals here seep in to the act of filmmaking itself. Moi, un noir, in contrast, uses the voiceover to foster intimacy with the subjects, creating this participatory act through the film’s sonic aspects. The subjects describe their lives in heavily accented French, use slang, and communicate a generally joyful tone, frequently bursting in to fits of laughter. The narration also questions the ownership of the images. Ethnography usually presents the images as belonging to a scientific authority, whereas the shared narrative of Moi, un noir, as well as its first person title, places much of the power of representation in the hands of the people being filmed. 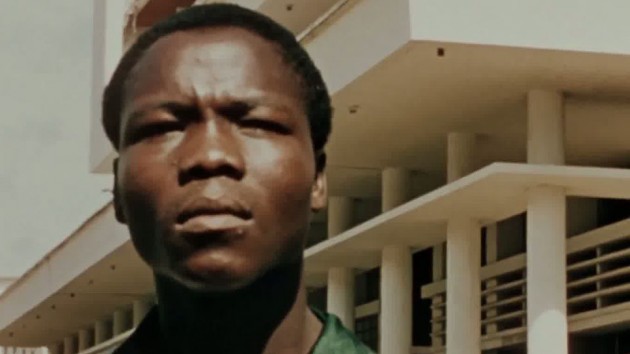 Ethnography is subverted by creating a “ciné-dialogue, where there is no longer a stolen secret later to be consumed in another place, at another time, by another culture” (Cowie, 208). This, in effect, bridges the distance created by the temporal displacement of Rouch’s film, by situating the viewer in a dialogue with the narrative of the subjects. The purely observatory ideal the films gesture towards is broken in favour of a relational strategy pushing against the othering undertones of ethnography. Hearing the characters tell their own stories is central to Rouch’s goal of a “shared anthropology,” and can be seen as a direct result of the lack of synchronized sound. Once again technological constraints lead to new avenues of filmmaking and film-thinking.

Jean Rouch’s personal definition of ethnographic cinema, exhibited in Les maîtres fous and Moi, un noir can be seen as a direct result of the technological constraints the films were created under. These same constraints are also at the centre of Rouch’s challenges to the established norms of expository documentary. In this essay, I suggest the utility of a more technical reading of film history, linking the more abstract and theoretical complexities of Rouch’s works to their roots in the practical realities of filmmaking. This approach has the potential to shine new light on an old master’s work and provide a down-to-earth and experiential reading of complicated concepts, tracing them back to their source in the day to day experience of pointing a camera at something and hoping magic will strike.

Henley, Paul. The Adventure of the Real: Jean Rouch and the Craft of Ethnographic Cinema. Chicago: University of Chicago Press, 2009. Print.