Burgeoning FX superstar Rick Baker’s iconic mutated monster baby, seemingly an inevitable outcome from the effects of today’s polluted world combined with the effects of a corporation’s experimental fertility drug, is born… and immediately goes on a murderous rampage, leading to an emotional rollercoaster ride of guilt and shame for the parents (Sharon Farrell and John Ryan), who struggle between dad trying to deny it’s his, shunning this creature that has led them both to be societal outcasts (he’s been fired from his career public relations job) and the primal desire to protect an offspring – in this case, from the patriarchal forces, both police and corporate, trying to kill it.

With It’s Alive Again, the second in Larry Cohen’s monster baby trilogy coming up next on 35mm at the Nitehawk Cinema’s wonderfully programmed (and hosted) monthly Deuce series, it was time to catch up quickly (the night before the Deuce screening, in fact) on the first entry. And, ah, seeing it again, what a reminder it provided that the wonderful 70’s American cinematic landscape that us true cinephiles hold in reverence wasn’t only due to the celebrated Hollywood auteur rebels taking over mainstream movie houses, but in equal measure the inspired filmmaking (and voices of societal critique) that concurrently rose up in the less celebrated (but no less important) independent horror scene; and filmmaker Cohen was one of the latter.

While, yes, all the trademarks of a low budget, shot-super-fast affair are there in It’s Alive (Cohen’s claim of showing little of the monstrous baby as an aesthetic choice in the less-is-more Val Lewton style smacks as more than a tad self-serving, as even short glimpses – as cool as the baby-smooth, vein-y critter is – still do reveal a struggle to get much convincing physical movement from the sharp-toothed wide-eyed little bugger), Cohen manages to cleverly turn much of those into strengths (the Truffaut approach of the ‘aesthetics of a film being defined by its budget’ is a bit more apt than the Lewton).

All you need do is look at the powerfully realized, yet typically (for Cohen) iconoclastic (when he’s doing right, that is) scene of Ryan’s father waiting in the hospital corridor coming to the slow realization that something has gone terribly wrong during the delivery and following him storming towards the delivery room and finding the bloody aftermath. Despite the unconvincing bloody mangled doc and his nurses, the rapid-fire askew angle shots, the slightly (and deliberately) off editing and the screaming image of the mother strapped to the delivery table capture not only a sense of immediacy, but a powerful sense of Ryan’s mental dislocation that’s reminiscent of early Roman Polanski (his filmic representations of madness through the Catherine Deneuve character in Repulsion come first to mind). And the hand-held shot capturing the dawning horror as Ryan dashes for the delivery room mirrors the long dolly shot of Roy Scheider’s Brody emerging panic as he realizes his son is in the nearby lake where the shark may be he headed in Jaws which came a year after It’s Alive was released. 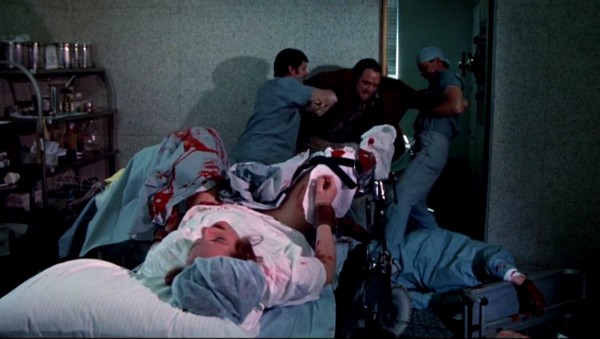 The “Birth” of Horror

Cohen may not be a cinematic master on the level of Polanski or Spielberg (and it’s hard to call that a knock, by any stretch), but he’s smart with his choices and clearly film-obsessive literate (as were his peers, both in Hollywood – Friedkin, Scorsese, Coppola – and in the horror scene – Romero, Carpenter, De Palma). George Romero and Cohen, I find, share similarities in their unorthodox editing sensibilities, yet they also unfortunately share the trait of providing us with some really awkward moments, with stiff actors presenting dialogue that come across as awfully wooden (as much as I enjoy the presence of James Dixon in much of Cohen’s work – including as Lt Perkins in all three “Alive” films, I’m not convinced he’s much of an actor – and I’m eternally perplexed if the blame for that actually lies with Dixon himself, the low-budget production limitations or Cohen’s filmmaking).

Saying that, though, Cohen also recognizes a good performance when he’s got one (and performer – his repeated use of the brilliant and eccentric Michael Moriarity starting with Q: The Winged Serpent in 1982 was a career coup for both) and John Ryan delivers a performance of deep pathos and emotional turmoil right up there with that other ‘best’ (and personal favourite), namely, as the sadistic warden Rankin, obsessed with re-capturing Jon Voight’s escaped folk-hero convict Manny in 1985’s Runaway Train (‘Let me tell you where you assholes stand. First there’s God, then the warden. Then my guards, then the dogs out there in the kennel. And, finally, you.’). Ryan’s final desperate speech to his bleeding baby (that he shot earlier and is now determined to protect) as they crouch hidden in the dank sewers, with tears flowing from his eyes, is startling in how beautifully realized and touching it is. 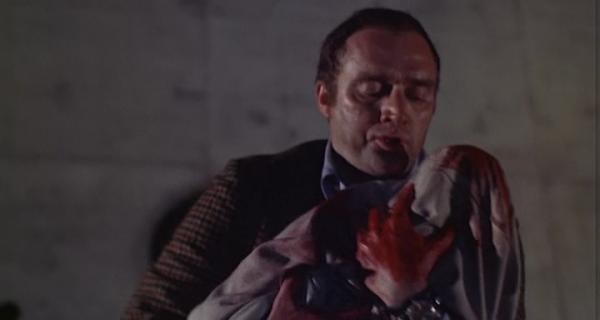 With It’s Alive (and much of his work), Cohen uses the main horror narrative as a backbone with which to present his primary interests – in this case, not only developing a convincing melodrama around the struggling parents, now cast out from society for bearing such a monster, and their emotional struggles, but also presenting critiques of the greed at the corporate entities and our easy acquiescence to their will. Shamefully missing from almost all horror films today (including – and most dishearteningly — those in the independent genre realm where, when a film does claim to provide something of a social or political context, it almost inevitably reveals itself as the filmmaker operating on the trite intellectual level of the discourse of faux liberal pro-corporate/military CNN, with the filmmaker’s intent revealing itself as much more about a desperate narcissistic hope for accepting pats on the back from sycophantic film reviewer friends, which they usually get), the 70’s greats like Cohen and Romero had something individualistic to say about the world we live in.

The indelible and beloved films of horror mavericks like Cohen and Romero don’t rely solely on monster babies or flesh-eating zombies (though those are pretty cool on their own too!), but on something much more radical; the subversion by the filmmakers of the horror film narrative, bending it to the will of their own critical purposes and interests. If they want to be a relevant voice in an increasingly chaotic and destructive-minded world (and, no, I’m not just talking Donald Trump – we’ve been heading in this direction long before he came upon the scene as the latest wicked witch to hate), today’s horror filmmakers today would do themselves a service by not only paying attention to the eye-popping sensationalistic elements of these guys, but to what they were up to beneath the grue. The substance beneath the eye-candy; that’s where the importance lies.