Reluctant small-town businessman George Bailey (Jimmy Stewart), a man who long ago gave up his dreams of travelling the world and instead was left stuck running his family’s Building and Loan company, wishing now he’d never been born, is about to commit suicide, when a warm-hearted, doddering guardian angel (Henry Travers) steps in. Determined to finally earn his heavenly wings, the angel shows George what life in the town of Bedford Falls would have been like without him.

Unsuccessful upon its initial release (not so surprising when looking at the history of so many of now beloved films), Capra’s Christmas-time classic grows more profound as the years go by. It’s not just the uber-sentimental ending that stands out, but the genuinely surprising emotional depths with which Capra delves to get us there. When Bailey stands on that bridge on Christmas Eve, ready to jump into the icy waters and end it all, the desperation the director has created (along with Stewart, of course, with his heart-felt and even at times painfully raw performance) feels as real as the notion of Bailey’s suicide (afterwards, someone I watched it with even said she felt the film hard to take because of how dark it is), ultimately rendering every ounce of schmaltz in the conclusion powerfully heart-felt and earned. The film manages a real emotional rollercoaster ride concluding, amazingly enough (as my cynical nature is quick to recognize the exploitative disingenuous nature of so many of them), one of the most satisfyingly joyous and grandiose happy Christmas endings ever captured on films. 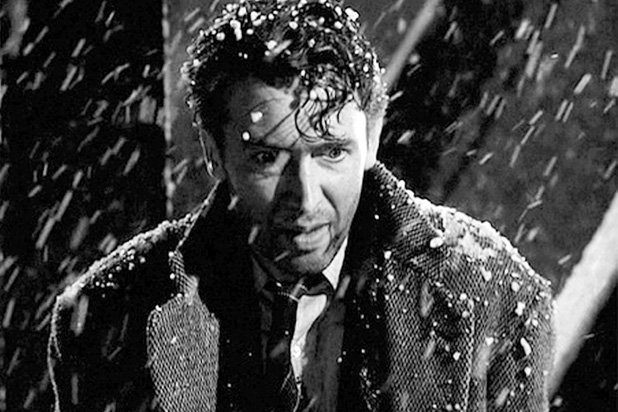 Stewart, with his natural affability and stuttering charm, was born to play in Frank Capra films (well, okay, in Hitchcock ones too, but those were a bit different). And who would suspect that a noted Christmas film would be such a potent political allegory on the corrosive effects of capitalism? Capra’s themes on the importance of community and individual giving, as represented through the actions of George Bailey — and how those are the ties with which to fight back against the corrupt capitalists, embodied (in a brilliantly nasty turn by the great Lionel Barrymore) by Bailey’s eternal nemesis, the rich, fat, mean-spirited and wheel-chair bound (as Barrymore genuinely was confined to) powerful banker Potter, whose life is committed to taking over and controlling everyone and everything in the town, have done nothing but grow far more important. The scenes of speculation on the world without Bailey, of a now dark, angry Bedford Falls, renamed Pottersville, no longer having been granted the warm effects of socialized community that Bailey spread, is terrifyingly and dark. It’s no wonder – and not without the normal painfully unjust irony that real life provides — that Capra and the screenwriters were investigated as being possible dangerous and subversive communists by the FBI and its fear-mongering House of Un-American Activities (a red-baiting, Cold War black stain of an organization that decimated many Hollywood careers, primarily based on the selling to the masses the fear of the communist USSR and Russia-infiltration, something the Democrats seem to be trying to ramp up yet again, with all of its accompanying irrational hysteria, for all sorts of similar self- and military-serving reasons, while ignoring the simple fact that Russia isn’t even a communist country anymore!). Fortunately, for whatever reason, Capra and the screenwriters ultimately and luckily managed to avoid persecution.

Donna Reed is as gorgeous and engaging as ever, embodying the two qualities that are often presented as mutually exclusive – she’s both a major hottie, yet retains the innocence of the girl next door (just the type of breakdown that millennials like to hear in describing women). I just saw Thomas Mitchell in The Hurricane, for which he won an Oscar nomination, and he’s back here again, providing his familiar (but never unwelcome) kindly, yet drunken (and, in this case, slightly inept, as he’s the one who clumsily sets in motion the event that leads to Potter getting an upper hand over Bailey and Bailey’s ultimate despair) sidekick with a heart role. As I often point out in watching these films from the 30’s and 40’s, while the studio system might have been draconian and repressive to its stars (it was), those moguls sure understand (and loved) cinema (unlike the faceless bottom-line corporate boards of today)… and, man, did they master the art of character casting.

The screening was accompanied by the three-reeler The Music Box, affording me the opportunity to catch another example of the comic mastery of that bumbling comedy duo Laurel and Hardy as a group of movers doing their clumsy best to deliver a piano up a veeerrrrryyyy long set of stairs on the side of a high San Francisco hill. As expected, the piano goes up, and crashes down. Goes up, and crashes down. It’s chaotic fun, in the best spirit of the two.