Rick Baker’s unforgettable monster baby creation is back, times three, as another LA couple, this time Eugene and Jody (Frederic Forrest and Kathleen Lloyd), already in the midst of marital strife pre-monster birth, deliver another of those mutant babies (leading to the inevitable somewhat awkwardly captured teeth- and claw-gnashing rampage through the delivery room)… and discover, to their horror, that there’s more babies out there just like theirs, with two of them captured by scientist Doc Perry (Cohen regular Andrew Duggan), one of the numerous characters returning from the previous film.

Fresh off viewing the original It’s Alive just the night before, screened on DVD off my home projector system in Montreal (I know, I know, there’s a blu ray available, but I’m NOT going to replace my entire library of DVDs with blu rays, no matter how much better they look!), I was primed to check in with its sequel, It Lives Again, playing as part of the monthly 35mm Deuce series at the Nitehawk Cinema in Brooklyn.

After the rambunctious Deuce hosts provided their as always colorful and informative slide presentation pre-amble, this time on the history of the New Amsterdam Theater, a mainstay of the ol’ New York Deuce illicit-sex-and-grindhouse days, where It Lives Again had a life, the lights went out and the (slightly ratty, but entirely presentable) 35mm feature presentation began. 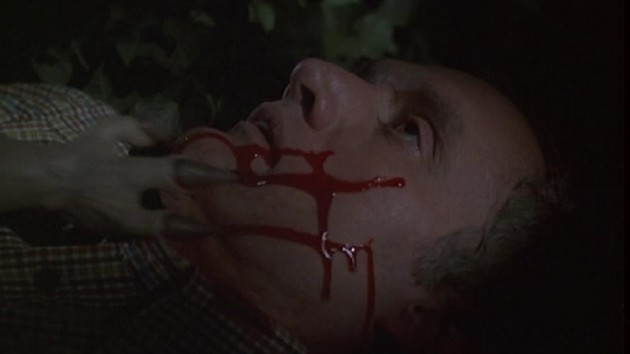 While the sequel comes with more flaws than the original’s creative burst out of the gate (for instance, the married couple at the heart of this go-round – with writer/director Cohen taking his usual admirable time exploring the trauma on their relationship, as well as having them deal with their new position as societal outsiders, cast out from mainstream society for breaking a boundary by birthing a monster – unfortunately garner nowhere near the sympathy of the original duo, especially the usually likeable Forrest’s Eugene, whose strident hysterics and constant sarcasm become a bit tiresome), there’s also much to admire in this follow-up to the hugely successful It’s Alive (which was distributed in ’74 in a single theater by unenthusiastic studio executives to unsurprisingly tepid response, only to be re-released – after the original execs were all rolled – by a new set of far more excited executives in ’77, into many theaters with an inspired ad campaign to massively resounding box office returns, explaining why the sequel took four years from the original’s initial release).

Cohen’s efforts at crafting a genuine continuing mythology with the sequel, as well as a closed continuous world is impressive and well thought out, illustrating another of the many reasons why he is rightly considered up there with the important indie genre mavericks, like Romero and Craven, that rose out of the 70’s and early 80’s. He might hinge the sequel around a similar idea of another unsuspecting couple giving birth to a monster, but that’s just the starting point; his overall concerns build upon the ideas of the original film. This sequel ain’t no simple cash grab, that’s for sure.

There’s the seemingly throw-away twist at the conclusion of It’s Alive, with its announcement over a police radio that another monster birth has occurred in Seattle, which its revealed in the sequel had been the child of one of the main radical forces in the film for the eradication of the mutant babies as a threat to humanity, that being the obsessed Mallory (played by the crag-faced John Marley, who had risen in the indie thespian ranks as a stalwart of an earlier filmmaking maverick auteur – of the non-genre variety – John Cassavetes).

There’s the return of the original father, Frank, again played by John Ryan, whose journey from hatred to acceptance of his dangerous (when threatened, mind you) mutant child — only to tragically watch it murdered by the police — was the emotional center of the first film, providing the great character actor, usually cast to play unrepentantly sadistic characters, an atypical role and one of his best (managing a pathos in his performance that he fortunately brings with him to this film as well, even in his reduced screen time). 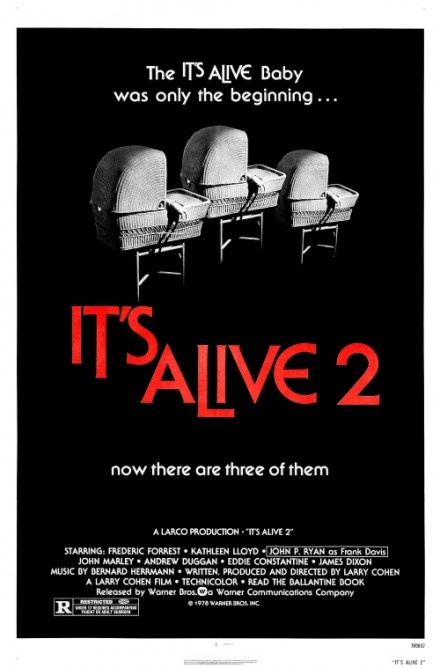 Frank joins with Dr Perry, who wanted the babies dead in the first one, but is now determined to capture them alive, to study them in the belief that they are actually the next evolution of human survival in a world growing increasingly ‘polluted’ (with the notion of this pollution being both literal, through corporate greed and corruption, as well as emotional, with the humans in constant strife). James Dixon, a likeable enough bloke in many a Cohen joint (still not sure how good of an actor he is, or if it’s just the bad ADR that always seems to follow him around) returns as the reluctant police lieutenant who doesn’t get much joy from killing babies, mutant or otherwise.

It Lives Again suffers from some pacing problems, both early on (with what starts as a very promising early scene of the mysterious Frank showing up announced at Eugene and Jody’s baby shower turning into a major information dump) and through the entire last third (with lots of awkwardly frenetic shots of the cops looking frantically around the LA hills for the escaped mutant babies and getting occasionally attacked in not particularly convincing manner). And as iconic as that Rick Baker monster creation is (and let’s be clear – it’s seriously cool), it’s pretty obvious that as little screen time is spent on them as possible (the long scene of Doc Perry and Frank introducing Eugene to the caged shrieking critters they’ve already captured, with the camera never turning around to show us the damn things, even though the narrative is simply begging for us to see them, is a particularly egregious example) because when we do see them, even in just close-up glimpses, you can just sense everyone working really hard to capture even the slightest convincing movement… and not really pulling it off.

Legendary composer Bernard Herrmann is back again, reprising the theme created in the first film and it’s great stuff, working better here than, say, with other low budget affairs from the 70’s, such as with Brian De Palma’s 1973 Sisters, in which his music was great, just too big for the film (a bit odd talking critically about a film of which I did a far less better received remake of in 2007, but, ah, what the heck… take it or leave it).

All in all, flaws and all, It Lives Again is a worthy building on the first film, with Cohen always working to develop complex characterizations (that often reveal deeper ideas) around the monster narrative. I’m intrigued to catch up with the third and final entry in Cohen’s evolving saga of the human struggle to grapple with the merging mutant baby population, Island of the Alive, which I’ve never seen before.