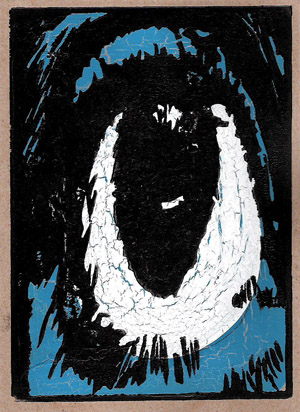 While Richard Kerr’s deconstructionist collage of high-octane movie trailers is a fairly predictable indictment of Hollywood’s excesses, his tactile tampering with the footage suggests something personal as well as political. Kerr isn’t the first to take on the Hollywood blockbuster machine; yet, he does so from a vested vantage point. As Chair and Associate Professor at Concordia University’s School of Cinema, Kerr holds a weighty share of cinema’s creative integrity in his hands. He has fostered a deeply personal relationship with experimental filmmaking throughout his 30-year career, beginning with his association with Ontario’s fabled “Escarpment School.” His commitment to independent film exhibition, dating back to his tenure at the Canadian Filmmakers’ Distribution Centre in the early 1980s, has buoyed numerous avant-garde projects. As Bart Testa points out in his catalogue essay, Kerr has a bone to pick with film’s factory model: his attempt at feature filmmaking (willing voyeur, 1996) was plagued by conceptual wrangling, bitter struggles with government funding agencies, and a disappointing release. Kerr’s most recent multimedia exhibition, Industrie / Industry, can be seen as part of his ongoing, deliberate response to this stumble, a reclamation of an autonomous and resourceful relationship with his chosen medium. 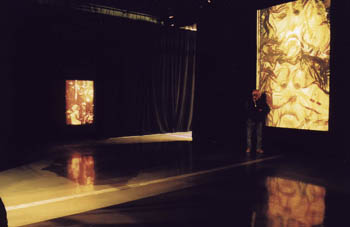 With Industrie / Industry, first presented at the Cinémathèque québécoise in Montreal from November 2004 to January 2005, Kerr launches a formal, aesthetic, and political investigation of our most cherished and loathed cultural institution: American popular cinema. The exhibition’s title plays on multiple meanings, pointing out the relentless commodification of movies while invoking hands-on, artisanal filmmaking. Interestingly, Kerr’s practice lies somewhere between the poles of mass production and avant-garde individualism; this exhibition, for instance, started from a gift of fifty Hollywood trailers, a Pandora’s shoebox of film marketing artifacts. Kerr excavated the formulaic patterns and obsessions in the footage and devised his wry response. The resulting works are both acerbically critical and devoutly cinephilic, acknowledging Kerr’s desire to both escape and embrace the “industry.” He mounts meticulously hand-woven celluloid strips selected from the trailer rushes over the sterile white glow of streamlined light boxes. Kerr leaves the frames unmarked, yet the layering and illumination of the tiny images creates a remarkably complex and compelling aesthetic phenomenon that draws the viewer’s gaze into ever more intricate arrangements of commercial fluff. Magnificent human-scale Cibachrome prints of film frames are embossed in beeswax, summoning the industrial processes of nature. For the short film collage d’hollywood (2003), contained on the DVD-format catalogue, Kerr and his collaborators unabashedly bleached, boiled, and botched Hollywood emulsion into malleable pigment. Still, they maintain a certain reverence towards their material; after all, collage d’hollywood reiterates high production values and, in keeping with the trailers’ original format, was printed on luxurious 35mm stock. One of Kerr’s collaborators, Brett Kashmere (editor of the catalogue) took this celluloid version as the starting point for the digital remix titled hollywood décollage (2004), also available on the catalogue. Even the one-of-a-kind, finely rendered, hand-painted limited edition covers form a telling contrast to the gloss of the bounteous digital interface. 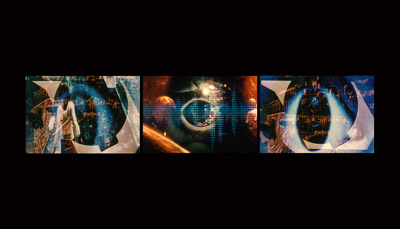 Far from a reactionary crusader for celluloid’s legacy, Kerr is a visionary of cinema’s future: Industrie / Industry makes it clear that the cinematic experience has less to do with technology than with cultivating a meaningful relationship between process and reception. Kerr imbues each of these with an ethereal yet earthly beauty through the matrices of his film weavings and light boxes, the commanding presence of the Cibachrome film frames, the abstractions of his slide show Demi-monde, and through his charged short films. The exhibition impressively activated all of these components. Conversely, the main strengths of the catalogue are the accompanying essays and, especially, the films. Along with collage d’hollywood and hollywood décollage, one also finds le bombardement le port des perles (2005), Kerr’s stirring and unnerving treatment of the widely seen trailer for Michael Bay’s Pearl Harbor (2001). It is in the films that Kerr’s critique of commercial American cinema is most trenchant. His selection process led him to hyper-active trailers from the sci-fi, disaster, and thriller genres, and through his renegade approach to montage, superimposition, frame manipulation, and intertitles, Kerr reveals a much darker violence in this mainstream fare. In the end, the viewer’s own anxious response to the barrelling barrage of dream factory motifs is implicated in the spectacle of suffering and subjugation that shores up big box office takes.

The catalogue texts play a revelatory role. Bringing together experimental film critics, filmmakers, curators, and graduate students, the versatile essays show that Kerr’s artistic processes, like his light box weavings, reward closer inspection. The eminent film scholar William C. Wees positions collage d’hollywood within the history of the avant-garde’s relationship with Hollywood; Randolph Jordan (click here for Jordan’s interview with Kerr) offers ample food for thought on Kerr’s oeuvre, especially regarding his use of sound; Gerda Johanna Cammaer digs deep into the Demi-monde slide installation; and Bart Testa revels in the light boxes, his comments drawing on his expertise in Kerr’s artistic career. Kerr chips in with extensive production notes and sketches. Perhaps most illuminating is the discussion between Kerr’s collaborators, Brett Kashmere and Michael Rollo, describing not only the filmmakers’ painstaking process (who would’ve guessed they used the household cleaner Fantastik to soften the film emulsion?), but also his commitment to cultivating the skills and ideas of his heirs. This commitment is born of humility, compassion, and foresight: at a time when the public debate over cinema is preoccupied with technological change, it is these rising creative forces that will head the next stage of the struggle against our increasingly homogenized cinematic landscape. 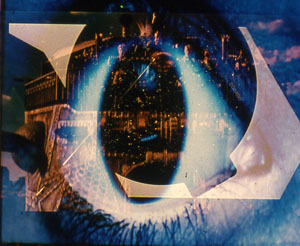