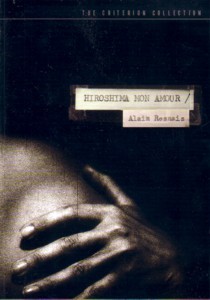 I have planned to include this DVD review in the follow-up issue to last month’s Bazin special because of the (no doubt obvious to some) connection it bears to Bazin. Bazin was born on April 18, 1918 and died on November 11, 1958. The shooting for Hiroshima Mon Amour began in August of 1958, a few months before Bazin’s death. The link however, goes beyond mere overlap of dates. Along with À Bout de souffle, Les Quatre cents coups, and Ascenseur pour l’échafaud, _Hiroshima Mon Amour_ stands at the forefront of one of the most important movements in film history, the French Nouvelle Vague. Bazin was the founder of the Cahiers du cinéma, the journal for which many of the future New Wave directors, namely Godard, Truffault, Chabrol, Rivette, and Rohmer, plied their trade as film critics. Hiroshima Mon Amour_ _is rightly hailed as one of the masterpieces of the French Nouvelle Vague. The movement, however, is anything but homogenous, and recent history has acknowledged this by distinguishing Resnais as part of a parallel group of filmmakers, the “Left Bank” (the Left Bank is a cosmopolitan, bohemian quarter of Paris where, in fact, Resnais did live). Left Bank directors (Agnés Varda, Chris Marker, Georges Franju, Alain Robbe-Grillet, and Marguerite Duras), less movie-mad and considerably older, and in some cases more experienced than their Nouvelle Vague compatriots, were more literary based and esoteric in their tastes. Although Resnais, 36 when he started __Hiroshima Mon Amour, was closer to Bazin’s age (40) than the directors who formed the French New Wave (Godard, Truffault, Chabrol, Malle, Rivette, with the exception of Rohmer, who was two years older than Resnais), they were still all a cultural by-product of the late 1950’s French intellectual and cultural milieu. Indeed when one looks at the New Wave as a whole today, the films made by the younger directors do not have any more in common with each other than the films made by the directors of the “Left Bank.”

Hiroshima Mon Amour ranks as one of the seminal films of the late 1950’s, early 1960’s “modernist” renaissance. Unlike the 1920’s, where many modernist artists made films (Salvador Dali, Marcel Duchamp, Fernand Leger, Man Ray, etc.), this period saw filmmakers across several nations collectively challenge classical approaches to film structure and style with equally bold, adult subject matter (Antonioni, Fellini, Bergman, Bunuel, Ray, Wajda, Bergman, Tarkovsky, etc.). The film’s contemporary narrative centers on a brief affair between two married people, a 31 year-old French actress in Japan to make a peace film on the bombing of Hiroshima and a 38 year-old, successful Japanese architect (in an oblique way, the film-within-a-film scenes remind me of the similar scenes with Ellen Burstyn as the actress character from The Exorcist 1973). The affair triggers wartime memories concerning the young actress’s traumatic affair with a young German soldier in Nevers, France. The film’s innovative narrative structure and formal daring lifts the film above this slight, even trite sounding story. As we learn from the commentary track and interviews on the new Criterion DVD release, Duras and Resnais came to the conclusion that it would be best if they placed the atomic bomb in the background of the love story, rather than making it the central subject.

After making the concentration camp and Holocaust documentary Nuit et brouillard (1956, also just released by Criterion on a brand new DVD transfer), Resnais was asked to make a documentary on the atomic bomb. Unable to reconcile this subject matter to the documentary short format, he declined and instead suggested a feature fiction on the subject. Like La Bataille du rail, fragments of this documentary inception (stock footage from the war) appear in the film’s opening, but the parts are integrated into a seamless, flux-like whole. A great deal of credit for this harmony goes to Marguerite Duras, an established (though by no means star at that time) “nouveau roman” author chosen by Resnais to write the screenplay. Resnais says, “I intended [Duras] to compose a sort of poem in which the images would act as a counterpoint to the text.” A good deal of the film’s modernist sensibility stems directly from the “nouveau roman” (Alain Robbe-Grillet, Jean Cayrol, Raymond Queneau), a literary style that downplayed plot and action in favor of more reflexive meditations on the narrative process, language, temporality, memory, and subjectivity. The film’s genius is in finding fresh cinematic ways to translate these elements to the screen: free-form cutting between past and present without formal forewarning; mixing of documentary and avant-garde style; bold graphic match cuts across time (for example, the image of the man’s hand on the hotel room bed triggers a match cut to the dead German soldier’s hand from the past, or clutched bodies in the past linking up with clutched bodies framed identically in the present); and evocative camera movements that sculpt through spaces like invisible tanks.

The film’s wonderful sense of unity is even more outstanding when the film’s production history is considered. The film was shot in France and Japan, with Resnais using native technicians and even different film stock for the Japan and France locations. The Japanese sequences were shot first, in August and September of 1958 by Michio Takahashi. The France sequences were then shot in December by Sacha Vierny (a frequent collaborator of Resnais’ and currently Peter Greenaway’s cinematographer of choice). Japanese actor Eiji Okada spoke no English so had to memorize and delivery his dialogue phonetically.

Since the theme of memory and its role in the reconstruction of history is so central in Hiroshima Mon Amour I should note one other important context that predates the nouveau roman, Marcel Proust’s Remembrance of Things Past 1913-27 (a fuller context would need to go a step further and include the philosopher Henri Bergson, who no doubt influenced Proust’s own ideas on memory). Proust’s opus novel is structured around two types of memories, “voluntary” and “involuntary.” The former is a functional memory at the service of daily needs and immediate perception. Involuntary memory is, to quote Proust, “something that comes unsolicited from the past completely to unsettle the individual in the present.” Hiroshima Mon Amour employs a similar aesthetic use of memory, with the (personal and historical) past searing into the present. The film shows how history and the past are always seen through present eyes; and likewise the writing of history-as-narrative is wrought with the imperfections of language, memory and history itself.

The theme of memory and history, as used by the Nouvelle Vague/Nouveau Roman, relates to an interesting (and old) theoretical question concerning art and politics. Is the Nouvelle Vague’s formal complexity a type of engaged resistance or an aesthetic escape from political reality? Are they more interested in how we know (epistemology) than in what we know? Lynn A. Higgins in her book length study New Novel, New Wave, New Politics (1996, p. 12) places the question into a richer context:

We can not know the public tragedy of Hiroshima by a series of documentary images any more than the architect can know the personal tragedy of Nevers by a story. Both are epistemological illusions. (John W. Moses)

By the end of the film the two central characters, simply referred to as ‘man’ and ‘woman’, acknowledge this inability to fully comprehend either personal or historical tragedy, when they simply identify each other by the name of the two cities that form the source of the personal (Never) and historical (Hiroshima) tragedies. At the end of their brief one day affair, they know as little about each other as the said tragedies. There is a certain irony in the way Resnais’ precise and clinical use of form, his monolithic tracking shots, stark, graphic edits, and calculating compositions, remain unable to provide meaning to or relief from the human tragedies. Peter Cowie, who provides an effective commentary track, inadvertently parallels the film’s formal irony when his myriad of facts on the atomic bomb do little to distill any of the bombs true horror or help us understand it.

As par for the course, Criterion provides a remarkable high-definition digital transfer, impeccably restored for image and sound, that does wonderful justice to the subtle mood changes in lighting that are destroyed in dupe film prints or washed out video copies (from, to quote Cowie, the ‘doomed grey’ of the Hiroshima scenes, to the wintry chill of the Never scenes, to the luminous sheen of the institutional interiors).

The DVD’s overall presentation provides so much information and insight that is resembles a textbook on the film. As part of the extras, there are two interviews with Alain Resnais, one a five minute on camera interview from 1961, the second a ten minute audio interview from 1980. A similar treatment is given to Emmanuelle Riva, with a six minute interview from 1959 and, the highlight of the extras, a 20 minute interview with her in 2003. This interview, made exclusively for the DVD, bears remarkable testimony to the saying, one has “aged gracefully.” At 76 years of age, Riva demonstrates that she has lost none of her beauty or intelligence. She remembers events of over 40 years with precision and enthusiasm, and reflects on the film’s longevity and meaning with great insight. For example, she explains that her character’s double love, with the Japanese man in the present and the German soldier in the past, places her in an emotional temporal limbo.

British academic-writer Peter Cowie provides a fairly interesting full-length commentary track which begins with general background information and then moves into a more or less scene specific commentary. When he does the latter with an attention to how Resnais creates mood and meaning through form, this is where the commentary works best. As, for example, his analysis of how the editing during the scene where the woman returns to her hotel after the tea room scene, is paced to reflect her inner thoughts and emotions. Cowie is one of the leading scholars on Ingmar Bergman. Not surprisingly, then, he invokes many comparisons between Hiroshima Mon Amour and Bergman’s films, some of which felt forced. Of his contemporaries, Michelangelo Antonioni would make a more apt comparison (their parallel start in documentary and relative late turn to feature films, their use of architecture, use of bourgeoisie as social milieu, use of black and white, use of female characters, the shared use of musical composer Giovanni Fusco, etc.). For example, the extended scenes of the woman walking aimlessly through Hiroshima may have been a template for similar walks by Monica Vitti in L’avventura and Jeanne Moreau in La Notte.