Like the anthology comic mag it’s based on, the animated film follows a series of darkly fantastical sci-fi stories, often told with an anarchical flair and loaded with tons of naughty fun – i.e., violence, big breasted women showing off their assets and drug use (the fictional Plutonium Nyborg that makes the two spacecraft pilot users so stoned they aimlessly crash into a space station, so it’s obviously as good as anything we have here on planet Earth) — with the main continuity being the green orb Loc-Nar, introduced in the wraparound story that tells of a young Earth girl in a desert house who watches in speechless horror as her newly returned astronaut father (who flies down from an orbiting space station in a corvette) is melted into nothingness by the orb he has brought home from the heavens above for her. The girl listens in terror as the evil orb introduces himself as ‘the sum of all evils’ and recounts a series of mostly random tales the orb claims fit together in detailing why he has arrived here before her.

As big of a comic book fan as I’ve always been, can’t say I was ever a reader of the full mag size Heavy Metal (or its French, apparently more sophisticated and mature predecessor, Metal Hurlant), as the American edition never seemed as wildly satirical and biting — or as dangerous — as the underground Robert Crumb-style comics of the time (not that I read a ton of those either, but they certainly seemed far more intriguing and exciting to my young impressionable mind). The film itself ended up being the mishmash of varying quality that I expected, with different animators and animation houses tackling the stories. I did find my mind wandering a bit with the fantasy segments that become far too earnest for their own good, but, saying that, there’s still plenty to recommend. 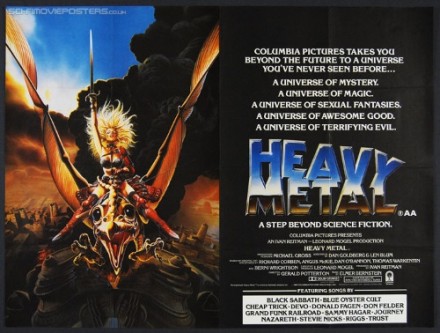 The stark, scary vibe evoking the fearful perspective of the little girl in the wraparound segment is effectively realized. The first story the orb recounts – taking place in a violent dystopian New York following cynical cabbie Harry Canyon as he picks up a gorgeous woman on the run with the ‘green orb’ — is a noir-style favorite for me, followed perhaps by both the darkly rotoscope-animated B-17 war fantasy and the silly fun space episode following the dastardly square jawed and over-confident Captain Sternn (apparently a Bernie Wrightson creation) as he finds his attempts at bribing his way out of his crimes upended by — yup — the green orb.

Along with the really majestic Elmer Bernstein orchestral score (gotta pick up that album!), there’s some nostalgic fun in hearing those familiar 80’s rock songs the film uses; with everyone from cheeseball Sammy Hagar to the clever, electronics of Devo…

I had no idea “Heavy Metal” was a Canadian tax shelter film, though thinking further on it, that it was directed by Quebec resident and animation legend Potterton certainly hinted at it. Not a great film, but still a more than worthwhile effort from that prolific Great North period. A lot of stinkers and mediocrity were churned out from those tax shelter years, but the many shining jewels made it all worthwhile.