The first (and last time) I previously caught up with Miami Vice creator Michael Mann’s splashy, with a sheen of uber-gloss, mid-90’s LA crime film Heat, packed with famous faces and character actor types and wildly marketed as the first time those gritty superstars who catapulted to fame from out of the brilliant cinematic landscape known as 70’s Hollywood, Al Pacino (as the homicide detective Hanna, legendary on the force for putting away the best of the best from the criminal front) and Robert De Niro (as the super-suave, cold and calculating big-time head thief McCauley, who doesn’t hesitate to kill, or walk away from anyone in ‘30 seconds’, if his survival depends on it) would appear in a film together across from each other (they were in Godfather Part II back in the early days, but that didn’t count, as they appeared in different timeframes), came at a time that I was beginning to grow slightly wary of the two all time thesp giants that I had previously worshipped unconditionally at the celluloid altar.

Pacino was just a few years removed from having won, astonishingly, only his first Academy Award… for his vacuous and shamelessly audience-pandering role as the irritable old blind man with the heart of gold in the hopelessly cloying Scent of a Woman. And slight cracks were beginning to show in De Niro’s wall of thespian imperviousness (nowhere near yet the vast chasm that would define his later career, with wretched performances so incalculably empty and bereft of caring, not only did it begin to assure that if De Niro was in a film it was probably bad, but it began to lead to retroactive re-consideration of his early work, wondering how much of his success wasn’t created through some fortuitous union of brilliant director – i.e., a Martin Scorsese or Francis Ford Coppola — with an empty vessel they could fill – i.e., De Niro – and reminding of the early scathing words of the late critic Pauline Kael, who had already begun indicting De Niro back in the early 80s, claiming he was perfecting the con-art of ‘non acting’).

So, with Pacino ratcheting up to the extreme the exceedingly annoying theatrical gimmick of sudden YELLING that he worked to Oscar success in Scent (you just knew the glowing mainstream success of that performance was gonna spell doom for him for years to come) and De Niro, looking slim and great as McCauley, yet continuing his oddly perfect batting average of being unable to generate even the slightest hint of steam in an on-screen relationship with a female (why the 20+ year younger Amy Brenneman character reveals even the slightest inclination towards this cold fish, let alone gives her entire life over to him, is unfathomable, other than perhaps the allure of the character’s wealth, or – more likely – in a variation on Pirandello’s meta-existential play “Six Characters in Search of an Author”, the script simply demanded the imprisoned actor do it, as it is ‘who they are’) proved to be quick irritants for me.

With it’s exorbitant 170 minute running time often concentrating on things we already know as part of the baggage of the genre (and I don’t say that in a bad way), such as the troubled domestic lives of both gangsters and cops who are too consumed with evading/catching each other to have successful personal lives, and Mann’s camera lovingly staring at the high-powered weapons and tools of the high-end thieving trade, mixed with the surface plays at performance delivered by both Pacino and De Niro (both immaculately dressed and quaffed), the film struck me as, underneath all the blustery action, intense violence and wild moving camera tricks, a fetish object, concerned with glorifying the surface of the genre, more than bringing any of it alive. 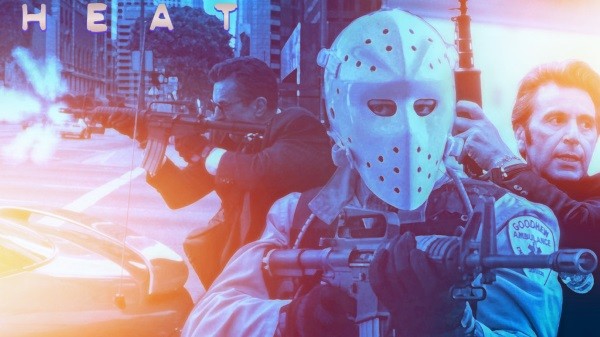 There’s also things that don’t make sense and come across lazy, even. The meeting of Pacino’s Hanna and De Niro’s McCauley in a restaurant is there for the marketing angle, with little concern for how contrived it plays out. Never for a second is it believable that the De Niro character would consider giving away even a tenth of the personal information, as vague as it is, to anyone, let alone this super cop on his tail who apparently admires him (though, considering how the police force felt about rapper Ice T after just singing about cop killing, how Pacino is a beloved figure amongst the men and women in blue after expressing open admiration for a ruthless sociopath we have witnessed killing cops, rather than more likely turning up dead in an alley with a large selection of police bullets in his back is anyone’s guess).

Having the scene right after the opening stick-up, in which De Niro, with complete buy-in from his guys, is going to assassinate the new wild card crewmember who acted recklessly, happen in the middle of a city diner makes no sense, other, than again, it allows for the additional drama of civilian involvement – and also allows the new guy to get away and become a pivotal twist to the plot (because, again, the script demands it).

Seeing it again over 20 years after it’s initial release, under similar conditions (35mm projection – and, man, did this print look and sound GREAT — in a fairly packed darkened movie theater) yet perhaps from a different perspective, while I still had the same issues with performance (the audience’s enjoyment of Pacino playing showman rather than delivering a real character may even have annoyed me worse this time) and plausibility, I did find myself much more open to what does work in the film. The opening action-packed heist is spectacular, as are all the impressive action scenes throughout. Amongst the glossy imagery and restless (that I often find speak more of insecurity than motivation) camera work, Mann does manage some real grit and power to the gun-battles and chases set in the middle of downtown LA. 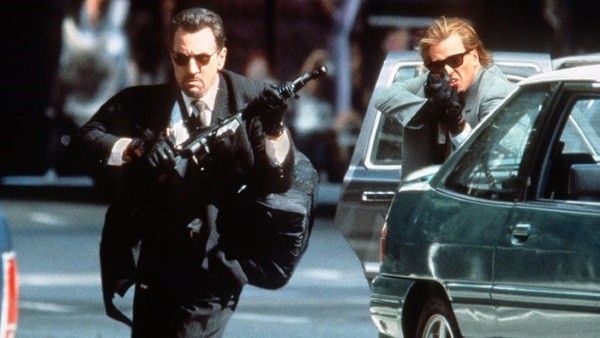 The familiar cabal of colourful supporting actors, from the looker Val Kilmer, who kinda crashed and burned when given his moment in the spotlight, to the striking hottie-with-the-blonde-hair-in-this-one Ashley Judd, who perhaps projects a bit too much depth and sense of grounded-ness to ever really have been that big superstar, to the always reliable Tom Sizemore (before he went off the rails completely into drug addiction and mental mania) and a bunch more, are all engaging enough in their parts.

With all that sound and fury, it’s not a boring object – I mean, film – by any stretch. I’ll give it that much.