The individual travails of our emo-core, do-gooder threesome from Season One continue, played out against the overarching weekly episodic supernatural events and afflictions brought about by the return of ‘The Troubles’ to the New England town of Haven that threaten to destroy the isolated fishing village and every one of the secretive inhabitants within it; there’s reclusive Audrey Parker (Emily Rose), now officially an ex-FBI agent and full-on small town copper (the better to hang about town and figure out the nagging question of who exactly the mysterious woman in that ancient photo from the last time the ‘Troubles’ came is… and why she looks exactly like her… and why so many Haven locals seem reticent to talk about it), then the sensitive (you can tell by the slight squinting half-profile pose he never fails to rely on to display his ‘deep inner concern’) Haven officer Nathan Wuornos (Lucas Bryant), beset with an inability to physically ‘feel’ anything (leading to a few admittedly humorous responses of absurd calmness to acts of brutal violence on him, such as when a series of large bolts were driven into his back that he needs pointed out to him by an understandably unsettled Parker) or anyone’s touch (until little Miss Parker came along, that is), who is trying to understand his deceased father’s secret connection to the town (as well as working with now official partner Parker to try and save the damn place each week), and, last but not least (because, as performers, they’re all three kinda equally ‘least’), the shifty roustabout, boat-living Duke Crocker (Eric Balfour), childhood antagonist of Nathan and local trader-of-illegal goods who was handed the keys to the town’s favorite bar/restaurant on the water in Season One (as the original owner understandably fled the hell out of there with his family) and took it over (easy-peasy, nothing difficult to learn here), who seems to get involved with each new whacky case every week and, by the end, revealing without fail that behind that free-wheeling, devilish exterior lies a warm beating heart of gooshy neo-liberal goodness. 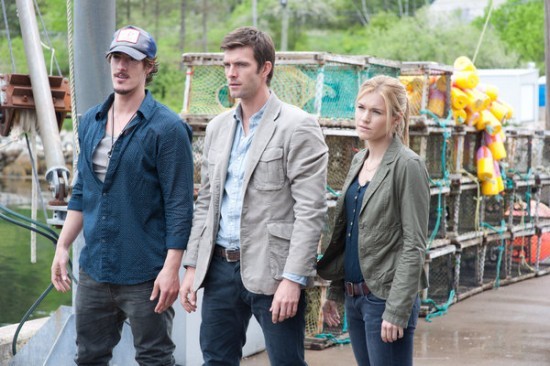 Like I mentioned under the Season One review, the reason I’m even watching the show is my on-going all-things cinematic Stephen King retro, with the Haven creators claiming as the basis of their show the author’s novel The Colorado Kid. And while the claim is utter bullshit, with the show having almost zero to do with the book other than a few sorta semi-similar side characters and the referencing of a ‘Colorado Kid” in the mysterious photo (no matter how much they keep going with all the King references, like having Nathan’s real father getting released from Shawshank Prison, and talk of lobster creatures on the beach reminiscent of the ones in “The Dark Tower” books, Stephen King books on everyone’s shelves, and on and on), clearly having been in development by over-zealous producers of the type who don’t give two shits about respecting an author’s original work, shamelessly making huge changes willy-nilly… still, it’s got King’s name in the credits, so I’ll continue.

From its Canadian-tinged lighting and shooting style, to its non-threatening lead cast and on into some of its wretched attempts at character humor, the show continues to aspire to the worst of audience-comforting television mediocrity in so many ways, and yet, as I mentioned in my previous write-up about last season, there are just enough clever twisting narrative elements to keep me kinda, mostly, usually interested… and it’s grown even a bit more intriguing this Season. Things are looking up (it’s just that one step forward, one step back disappointment thing that continues to frustrate).

I mean, I’m definitely partial to the set-up, with its Lovecraftian town setting, a community beset by an ancient recurring evil, with things like teenage girls turning into cannibalistic Wendigos, and children into fish monsters (with that particular episode ending with the most powerful image of the entire show, as the infected children accept their fate and quietly walk out into the sea, disappearing beneath the waves, leaving their scared parents behind on the shore, all part of a lineage afflicted with a transformation on their young, triggered whenever ‘The Troubles’ return, allowing the children to live under the sea until the bad times have passed again). The ‘monster of the week’ weekly approach to unraveling the larger over-arching mysteries has a nice ‘X-Files’/black oil feel to it. 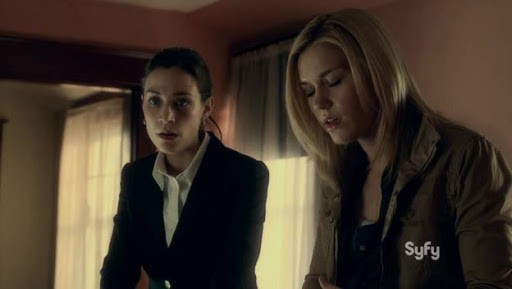 The Mystery of Two Audrey Parkers

The ‘cliff-hanger’ appearance at the end of Season One of a second ‘FBI agent Audrey Parker’, arriving in almost identical fashion to how our first Parker appeared at the beginning of that season was a nice finish, and the growing real uncertainty into Season Two of our main Parker’s identity is a fairly daring challenge to throw at the type of easy-watching audience the show seems to aspire to (of course, the writers and Rose keep our li’l Miss Parker ever on the side of unthinking good and as far away from complexity as possible, so it’s not like the show ever really gets deep or anything). On the other hand, Balfour’s Crockett remains as untrue a scoundrel as possible, coming across about as dangerous as a character can be when operating from a television safe space. Bleh.

That’s what I mean. I seem to end up with thinking (or saying) ‘bleh’ at so much of this show. Take the introduction in episode four of Parker squeeze Chris Brody, played by Jason Priestley, for instance; a character with a condition of having everyone, male or female, immediately smitten with him upon seeing him (except Parker – who I forget to mention, is the only one in the town mysteriously free from any of the effects ‘The Troubles’ causes on everyone else, who ends up falling in love with him for real). While Brody’s affliction does lead to some humorous situations and moments, and Priestley is a likeable enough of a bloke, the endless fawning and over-emotionalizing between him and Parker is just so audience pandering it brings me back to the ‘bleh’ thing (and while – SPOILER ALERT! — Brody ends up ‘having to leave’, with do-gooder Parker painfully encouraging the brilliant scientist kid to go on and follow his dream of opening some research institute or something in London, brings it emotionally back between the weekly investigating cop partners Wuornos and Parker where we’ve been given lots of hints – in Mulder/Scully style — that it has belonged all the time… I have to say… talk about two characters/actors with ZERO sexually chemistry between them!).

There are worthy visual highlights (amongst the digital effects) and some decently captured dramatic moments (the culmination between Stephen McHattie’s malignant town Reverend character and Parker being a stand-out example, both in narrative and impressively on-point editing) that do work well in the show. While the characters (both with the actors and the writing of them) all annoy me for their surface emoting (including the Edge guy, from the WWF, who plays kind of an enigmatic supernatural fixer, with the particularly strange affliction of having bullets always find him when shot in his general direction), I’m still interested enough by the continuing narrative mysteries constructed to pay attention. SO while it’s not a full-on guilty pleasure (it’s not like I LOVE the show), it’s close; it’s the kinda show where I feel sheepish about admitting I’m enjoying, considering it has so much of the kind of stuff I can’t stand.

As I was approaching the end of Season Two, a part of me was still wondering if I would continue through with all five seasons (with a show I would never have started in the first place without the tangential King connection), even with another decently intriguing cliff-hanger of an ending to the season… and then, the seemingly thrown-in, out-of-nowhere thirteenth ‘Christmas’ episode, broadcast a full two months after the second season officially wrapped, happened.

Following a bemused Parker, confused at why all of the locals, including her partner, are gleefully celebrating the supposed coming of Christmas Eve that night (while alternately lecturing her for not being in the Christmas spirit) – in the middle of July! – while, at the same time, working against time to uncover why the town’s population is rapidly disappearing, one person at a time, as if they never existed, before the entire town is gone (leaving only the ridiculously over-decorated Christmas accoutrements), with a suddenly near pitch-perfect irreverent tone, hilarious moments and overall cleverly executed concept, it was an episode that suddenly provided a glimpse at the show’s potential – something I don’t suspect it will reach often (and perhaps even ever again), but… Eh. I’m back in. I’ll make it to the end. I think. 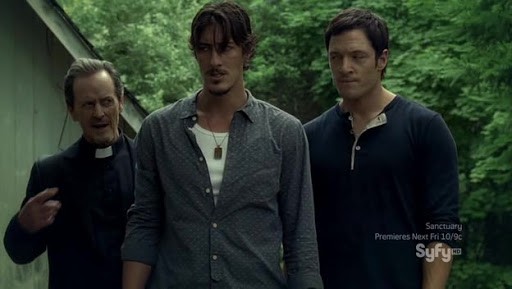 And at least this season they got rid of most of those ungodly awful character music cues, including the particularly dreadful ‘jazzy’ score that came up every time Duke appeared on screen, desperately trying to make him seem cute and oh-so-cool. Bleh.