“Dwight’s taking Janine and Robert somewhere safe.”
“Being together and finally being able to accept each other for who they really are, I think that should help Robbie from appearing again.”

the sort of eye-rolling, emotionally-pandering gibble-speak that ends most episodes, with the ‘Trouble of the Week’ vanquished and another lesson of how fundamentally good humans are achieved

The mysterious ‘Troubles’ continue unabated for another season in the titular New England coastal town (the better to reference both Stephen King and HP Lovecraft), with each week our emo-heroes – namely, the romantic triangle (though unrequited on all sides) of ex-FBI agent/now local cop Audrey Parker (Emily Rose), her ever-pouting love sick partner Nathan (Lucas Bryant) and Duke (Eric Balfour), the supposed town bad boy who shows zero signs of anything except constant sensitivity (If you ask me that’s the real ‘trouble’ of this town – everyone has the emotional depth of a Hallmark card), as well as assorted other Hollywood-style lookers (like the cutsie, typically too-skinny female psychiatrist Dr Callahan, a new addition to the season) – not only battling the latest supernatural affliction besieging the townsfolk, but also (in the season’s overarching story) racing against time to catch that nasty serial bolt-gun killer (kinda hard considering his ‘trouble’ is that after he kills someone and skins the victim, he can jump into their epidermis and sound and look just like them) — who early in the season abducted and tortured Audrey — in order to discover what exactly this brutal killer knows about Audrey’s unknown past (as a new version of her seems to appear in the town coinciding with the return of the ‘Troubles’ every 27 years), the mysterious Colorado Kid who seems connected to one of the previous ‘Audreys’ (then named ‘Lucy’)… and what the heck the story with this mysterious ‘barn’ that shows up each time to end the besieging of the town by taking away this latest incarnation of Audrey forever (just before a meteor shower can completely destroy the town… which happens each time as well), to the chagrin of both Nathan and Duke, who make more googly eyes at her then imagined in a Fabio-covered romance novel. 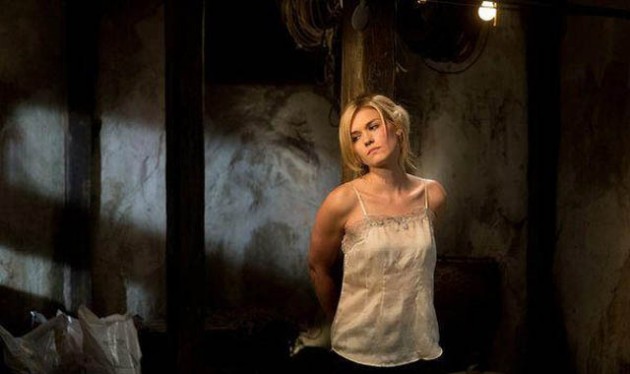 From the synopsis, you can see, there’s a lot going on here (which seems to have led to one of my epic paragraph-long sentences)… and that doesn’t even include all the various secretive shenanigans going on with the mercurial side characters, such as curmudgeonly and eccentric brothers Dave (John Dunsworth) and Vince (Richard Donat), who have been running the local newspaper forever and clearly know more then they’re telling, and fixer Dwight (Former WWE legend Edge), who specializes in ‘cleaning up’ the various messes the ‘Troubles’ cause, with his allegiance seeming to shift between being on our heroes’ side, to doing the bidding of some unknown figures lying in the shadows, their motives unknown. 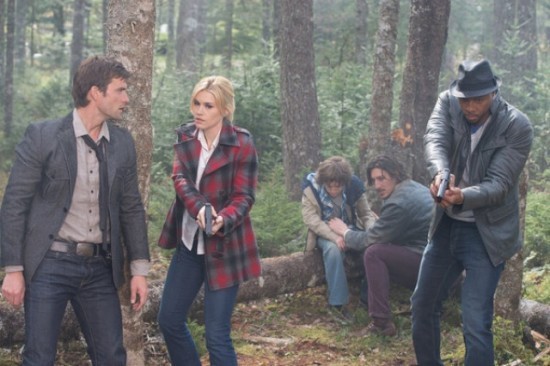 Okay, so we (well, actually, just me, I afforded my daughter the luxury of skipping this particular commitment to this part of our mostly shared ‘all Stephen King’ retrospective) are now three seasons deep into what is a five season commitment (though that, I’ve discovered, to my slightly disgruntled bemusement, is a bit misleading, as, similar to “Breaking Bad”, “Haven” doubles up on episodes for its last season, with its broadcast schedule having broken them up into two even chunks – in other words, I don’t care what they say, the damn show lasts SIX seasons!) and while the almost overbearing problems remain the same – the treacly character melodrama (that always seem to include some lame pop song that sounds just one level up from elevator muzak with a 20-something kid working really hard at a sexy voice that pretends at emotional anguish), the entirely non-threatening, Hollywood-soft leads, the decided lack of sexual chemistry between leads Audrey and eternally pouting Nathan, with their unconsummated love supposed to be providing an exciting relationship similar to those other far more compelling (if also failing a bit in the sexual tension department) supernatural investigators Scully and Mulder from the “The X-Files” but coming nowhere close (to the point that I’m wondering if either of the two, or perhaps both, actors aren’t gay), to the continued wretched attempts at character humor (why do these writers simply insist, for three seasons now, on asking actor Eric Balfour to attempt situational comedic bits that the guy just isn’t capable of achieving), an obvious lighting and shooting style that speaks to it being a Canadian production (translation; it aspires to mediocrity) – and, yet, in the face of all those simply ‘bleh’ elements (and that’s just a handful of them), the good stuff on the show? It somehow keeps getting stronger and stronger.

Having really nothing to do with Stephen King’s novel “The Colorado Kid” (other than a few character name references) that it claims it’s based on, it’s becoming fairly apparent as things have moved along here (and the show continues to improve) that, along with its Lovecraftian setting (and even milieu to a certain extent), the creators evolving inspirations are the Lynchian masterwork Twin Peaks, with its enigmatic air of entirely oddball mystery and underlying quirky humor, and, as I already mentioned, the classic supernatural/scifi series The X-files, with its Monster of the Week format combined with an overarching series-long storyline (anyone remember that ‘Black Oil’?) and the ever-present possibilities of romantic entanglement between the investigative leads, with even a few clever nods towards the brilliant TV-landscape changing Buffy, the Vampire Slayer in some of its more amusing situational setups (the shining example being the last – and first brilliant – episode of the previous season, with Audrey – the only one in Haven who is immune to the susceptibilities of the ‘Troubles’ – completely flummoxed why the entire town is not only wildly over-celebrating Christmas, with Santa and elf costumes, parades and all… but doing it in the middle of July, with everyone around her feeling sorry for her, convinced she’s denying the holiday because of her ‘emotional intimacy issues’, allowing the episode to cleverly and humorously comment on the characters, as did the best and most brilliant of the “Buffster” show). 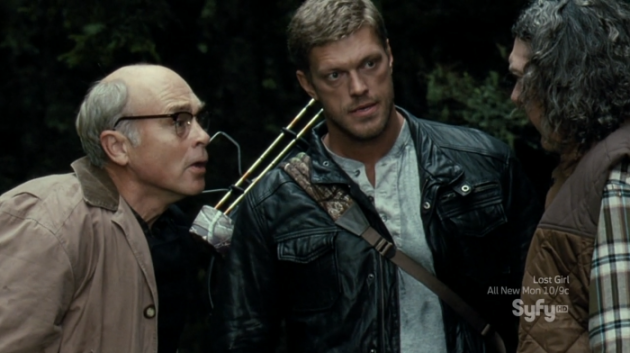 Haven may reference those shows, but overall it plays like lesser, more emo-pandering versions of each of them (though, to be fair, any attempt at channeling Lynch is bound to be met by the term ‘lesser’… because only Lynch can really do Lynch)… but still, it’s enough. I’m finding myself paying attention more, intrigued to discover how all this will resolve, who those Audreys really are, what the barn is, how the Colorado Kid gets mixed in. Another emerging highlight is just how admirably grizzly its getting, leading to a more sombre tone (and, again, like “X-files” creator Chris Carter, the makers of this show are clearly relishing in sadistic pleasure as they conjure up juicy weekly supernatural violence against random suburban nuclear family townsfolk).

As I already have in my write-ups on the previous two seasons, I admit that I was somehow – despite my best instincts to not accept such annoying do-gooder characters on the show — kinda falling for it anyway. I was even hinting at it being one of those rare discoveries known as a guilty pleasure. I’m no longer hinting anymore. It’s officially a guilty pleasure. I’m even looking forward to starting up Season Four (I only now wish I had brought my daughter along with me on this one).

And, like the previous season, this one has its own brilliant episode to brag about – the mid-season time travel one, where both Nathan and Duke fall back in time to meet the previous incarnation of Audrey just as the Troubles then are starting up. Clearly written by folks who understand the complex logistics specific to that kind of scifi story, they do wonders with it, both revealing past events that help unravel the main on-going mysteries of the show, while also managing surprises upon the return to the present. Good stuff.

Now if only they could stop trying to make Duke funny and Nathan less annoyingly pouty.