Reclusive FBI Agent Audrey Parker (Emily Rose), on routine assignment in the isolated New England fishing town of Haven, discovers not only its secretive inhabitants menaced by a range of deadly supernatural afflictions that indicate the return of the mysterious “The Troubles”, but surprising links to her own enigmatic past — one of which she realizes she has no memories of — through the finding of a cryptic old photograph that includes not only that damned ‘Colorado Kid’ in it, but someone who looks a whole hell of a lot like her mother (helped sold as such in that she’s naturally also played by Rose). Quitting the FBI to take on these weekly X-files-ian paranormal occurrences by joining the local police force, run by the irascible Sherriff Wuornos (with the part played by the ragged, train-wreck looking Nicholas Campbell, just one of the many Stephen King references thrust about, with him having played the nefarious Sheriff Dodd, many younger moons ago, in the brilliant Cronenberg adaptation The Dead Zone), partnering up with the Sheriff’s estranged cop son Nathan (Lucas Bryant), a troubled do-gooder who suffers the odd affliction of not being able to physically ‘feel’ anyone’s touch (until little Miss Parker comes along that is) and occasionally the reluctant help of local bad-boy looker, the shifty trader-of-illegal-goods Duke Crocker (Eric Balfour). 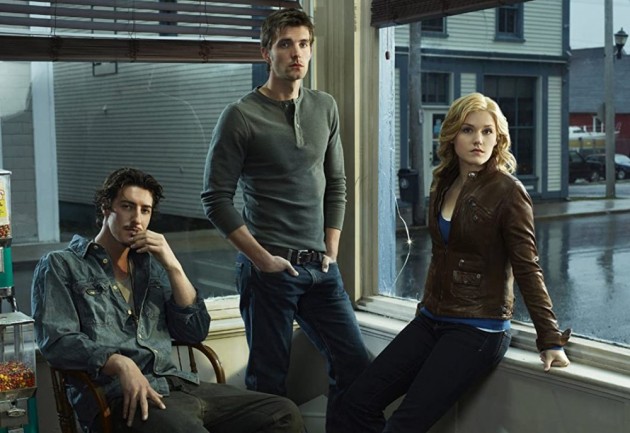 Caught in a cross-current wave of both the on-going fairly all-inclusive ‘cinematic Stephen King’ retrospective I’ve embarked with my daughter upon, as well as my continuous joyful plundering into the wonderful American imprint of hardboiled pulp novels, Hard Case Crime, I found myself having just read one of King’s adds to the publishing label, “The Colorado Kid”… only to realize afterwards that it was turned into a television series Haven… now, that in itself wouldn’t be a problem, except that the book came out in 2005 and the show ran for 5 seasons, starting in 2010. Since I’m just beginning the 90’s in the King retro, what’s a brother to do? Wait who knows how long until I hit the second decade of aughts in my King viewings… and forget the details of the book under a growing pile of further Hard Case titles? So I decided to forego my own obsessive chronological rules, fend off my own internal disapproving nature, and jump into the show, with the book’s contents fresh in my mind.

Regarding the book, unlike the usual tough talking, crime-laden output from the prolific Hard Case Crime label, a wonderful publishing house that focuses on new, old and/or lost noir masterpieces (each gifted with one of those flashy lurid covers from the style of yesteryear), King’s “The Colorado Kid” is a surprisingly calm, even casual, bit of storytelling (not the usual content for the label, but I’m sure when Stephen King says he’ll write a book for you, you take it).

A simple investigative conversation between Dave and Vince, the founder and editor of The Weekly Islander, and the young cute intern Stephanie they’re fawning over, who the boys are testing to see if she’s up to snuff to perhaps take over for them, in which they detail for her the myriad of strange evidence that surrounded a long-ago unsolved case of a body found on a nearby beach, that of a man with no known connection to the island whatsoever (and who was seen at his office hundreds of miles away – in Colorado, of course — earlier on the same day as his death on the New England waterfront), might be a bit too precious in its nostalgia-laden King-isms (which seem to have gotten worse over time with the guy) and, in a tale where no crime is solved or answers provided (one that likely would have remained unpublished if not for the fact it came from the typewriter of the most successful author of all time)… overall? I ended up enjoying its flow, with its unobtrusive storytelling baring out King to be riffing, thoughtfully, on the difficulty of uncovering truth, as well as, more tangentially, on the nature of creativity itself. 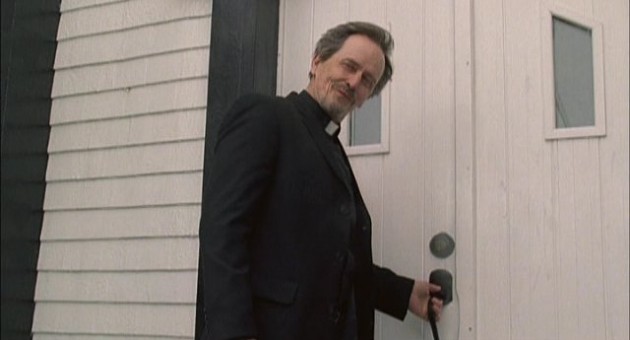 A usual Hard Case novel it’s not, but nevertheless, King managed a nice, cozy ‘feel’ to the book (and, hey, if it raised the profile of the label, as editor Charles Ardai has since claimed, with the book being the by far their highest seller, then all the more power to it).

Then came the show… and it didn’t take me long – about five minutes into the first episode – to realize that the necessity to start watching right away was entirely… well… unnecessary. Other than including versions of Dave and Vince, the slightly cantankerous gatekeepers for the town’s history (though, even there, so far at least, relegating them from major players in the King narrative to bit players meant as quirky color to the ‘small fishing town’ feel of the show — as well as transforming them into bachelor brothers, perhaps to avoid having them come across as a suspiciously gay duo as they always show up together) and the inclusion of a ‘Colorado Kid’ as part of the show’s overriding arch (though one that has nothing in common with the book’s mysterious death) the show’s claim of being based on the King novel? Total con job. In other words, it has basically fuck all to do with the book.

Now I’m not saying that’s necessarily a bad thing; with the skimpiness of plot, and lack of anything close to a resolution of the mysterious death in the book, it’s not exactly like it had much to offer for a television series – but using the central core mystery as at least a jumping off point might have been respectful, or honest (when crediting it as based on the book!), instead of just ignoring it (while then loading the show down with overt nods to King’s work – such as one of his titles prominently seemingly displayed on every Haven townsperson’s book shelf — as possibly an act of producer atonement). 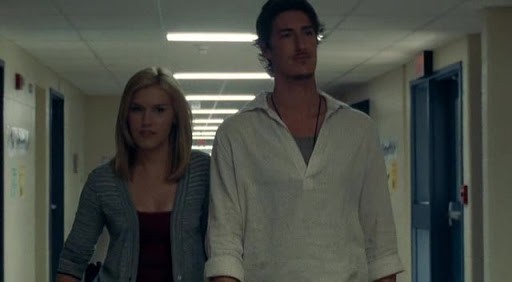 And what is it with these Canadian-lensed shows? Similar to that travesty of a tv show also produced up there in the Great White North, namely, Damien in 2016, an uninspired follow-up to the “Omen” movies, the main actors are surface-prominent (i.e., no innate depth at all), kinda good looking all (but even on that front, nowhere near captivating), the lighting is flat and uninteresting (with that whole absurd bathing every place in shadow ideology – including the police station… I mean how can anyone possibly read a suspect’s report with all the lights turned off?), the digital supernatural effects are passable (at best) and the whole thing is just profoundly mediocre (a status far worse to bear witness to than that of being outstandingly awful). Not surprisingly, the low-grade opening credit sequence and associated theme music are so generic they feel suspiciously like they came from the same production house as the trite ones manufactured for Damien. As the first few episodes unfolded before me, I thought — I will say this for that antichrist show, though… at least it had enough sense to only bother us for ONE season… Haven made it FIVE! Not only did that notion fill me with resentment for those dead-minded, entirely undiscerning zombies who tuned in each week to keep this thing going, but had me wondering if I could possibly make it all the way through.

So that’s how I was feeling after about three quarters of the way through the 13-episode season. With everything from the truly terrible ‘Duke theme’ every time he shows up (sort of this light conga beat meant to speak of trouble and playfulness, but just sounding ridiculous and desperate, for a show – and actors – who have nothing approaching comic flair or timing), to Parker and Rose’s lame bantering (again, bereft of any ‘cutesy’ timing at all), and on to how Duke is supposedly a shady guy… but every week without fail he displays his sensitive side and help out the cops, I was getting tired pretty quick of all the disingenuous goings on. Yeah, there were shapeshifting monsters, and some (CGI) gory bits (and the welcome presence of Stephen McHattie as the local definitely shady priest who is revealed to have some literal monsters in his closet as well), but my eyes were glazing. Hell, full disclosure — I even found myself playing a couple rounds of Sudoku on my phone now and then (a new obsession I’ve discovered during these lockdown days) to pass the hour quicker… 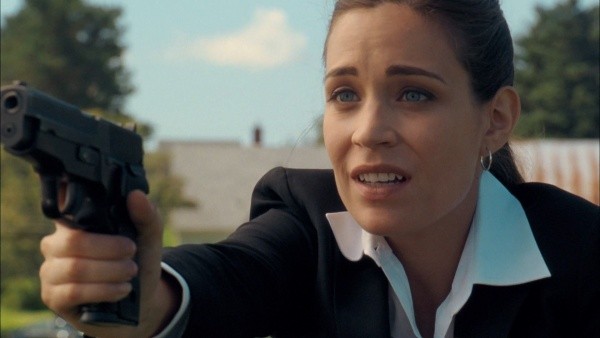 Then… I don’t know what happened… it’s not like show’s flaws went away (they didn’t… at all… in fact, there’s a later episode scene where Duke is forced to do this supposedly ‘amusing’ striptease for Parker that is just… one of the most misguided telly show moments I’ve ever witnessed). Yet, somehow, I suddenly found myself warming just a bit to at least the traditional idea of its supernatural fish out of water story, with its female investigator in this strange Lovecraftian (did I really just write that?) fishing village. Even some of the growing clues became just a bit more.. intriguing: such as the presence of Parker’s FBI higher up Agent Howard (Maurice Dean Wint) suddenly revealed as skulking about in the background, and the growing suspicion around cranky Sheriff Wuornos’ motives and possible involvement in what’s happening in the town.

And after the season finale, which — while still filled with unforgivably lazy digital effects — had just enough twists, including the big one that put the actual identity of Parker herself into question in a nicely conceived cliff-hanger ending that cleverly (yes, that’s right — ‘cleverly’) loops entirely around to the show’s first episode opening (while unfortunately introducing another LA casting-style actor into the mix for next season – ah, a step forward, a step back) has me thinking… think I’ll stick around for at least another season… see how some of this stuff plays out…

If you ask me, I’ll tell you don’t bother, Haven sucks… but, yet, I seem drawn to continue watching it. Looks like while I’ve always openly scoffed at the notion of a ‘guilty pleasure’, I seem to have unwittingly stumbled across one of my own.