‘You don’t get to threaten Audrey!’

Okay. Enough’s enough. This has got to stop.

I mean, forget ‘town bad boy’, Duke has practically become Ghandi with how selflessly heroic he acts on a weekly basis – never mind that he only met the cute (if more than a bit too precious, with all that quirky, quasi-Tourette’s twitchy shtick she’s got going on) Jennifer earlier in the season (replacing the previously slightly-less cute and too-LA skinny female Dr Callahan character who got offed by last season’s Bolt Killer). I mean, Duke and Jenn have barely slept together (which doesn’t seem to be much a prerequisite for falling in passionate love – or what passes for passionate love — in this alternative universe)… to be at the point of expressing such courageous love for her (by absurdly getting in the face of an actor so much more physically imposing than Balfour it had me thinking about what I always imagined ex-con tough guy Danny Trejo must have wanted to say between shots to equally mealy-mouthed wannabe tough guy Adrian Brody in the atrocious misfire Predators – namely, ‘hell, I used to fuck bigger guys than you back in prison’), seems pretty, pretty sensitive for this guy we keep being told has a long shady history of being some kind of illegal trading pirate when not operating as a womanizing scalawag, all of which we get almost zero evidence of (other than him accepting an occasional shipment of what appears to be a crate of wine or something) and never really plays into the narrative (other than as an attempt at giving him street cred, which he sorely needs considering what a touchy-feely emo-wimp he keeps acting like). 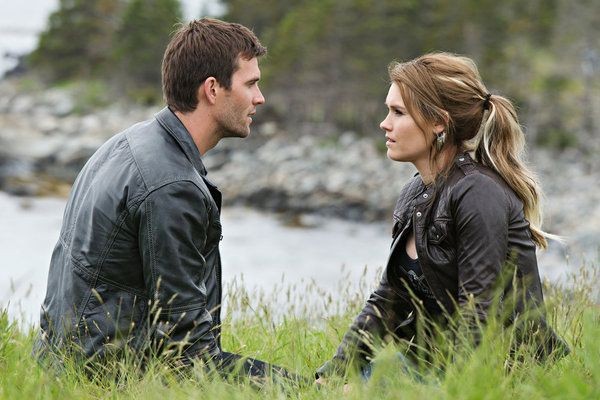 At least with Nathan, while his self-sacrificing heroic proclamation above may be equally as unconvincing as Duke’s (I mean, come on, these guys are creampuff LA actors, whose bravest act is almost assuredly voting Democrat every Presidential election), at least it makes a bit more sense, with much of the entirety of the show building around his relationship with Audrey – only consummated, that is, this season (if you don’t count the time Nathan boned one of Audrey’s previous incarnations named Lucy during that really clever time travel episode in Season Three that led to the nice twist of Nathan having had Lucy, i.e., Audrey’s, son), though, sadly, as I’ve pointed out before in my previous season write-ups on the show, the two actors share zero sexual chemistry to speak of…. and I mean… none.

Perhaps it’s just the anglo-sexual puritanical feel to the show – it is set in Maine after all (the better to drum up an HP Lovecraft connection, with a strong quality of the show the overarching narrative about a vaguely —‘Old One’— mythology deep within the town’s history reminiscent of that author’s vivid musings… certainly closer than to Stephen King’s “The Colorado Kid”, from which the show credits itself as having been adapted from yet bares almost no resemblance to), with Maine being the original American home to the Puritans (as well as shot in Nova Scotia, another home of the Puritans, just Canadian-style) – that renders the love interests with nary a whiff of sensuality or eroticism (and that too familiar white-bread bland Great White North television-aesthetic doesn’t help, that’s for sure).

The Remaining tangential connection to Stephen King’s “The Colorado Kid”

But let’s not get off track. It’s important to remember (especially in the face of such superficial pretend-deep hogwash)… what’s challenging about our human condition is to find respect and caring for — and in — each other, despite our shared selfishness’s, unending self-involvements and narcissisms… because… sorry… in general, we don’t act incessantly heroic (I know, I know, some of you are convinced you do, but, trust me, you really don’t). We’re in the process of starving a third of our population off the planet (when there is more than enough to go around) while at the same time mindlessly stepping over the homeless every day as we contemplate our next vacation spot. The human being has been nothing but a grave problem for this planet. In fact, our most significant contribution has been the ushering in of Earth’s next great mass extinction, which we’re in the process of right now.

Haven is a show of endless single level emotionalizing, from all the characters, constantly expressing their insufferable emo-core emotions without any second level of depth (that very level where, you know, actual drama emerges). And all this humans-as-hero worship? It reminds me of once listening, with great cathartic pleasure, to filmmaker David Cronenberg describe in a slam-dunk on-stage diatribe the emotional and moral approach of modern Hollywood storytelling –occasionally fun, yes, but overall? Completely emotionally dishonest and morally bankrupt, there to allow us to pat ourselves on the back, creating portraits of ourselves as, okay, perhaps a bit misguided and flawed, but – ultimately? – sacrificing and good. It’s the grandest most self-serving level of delusion. 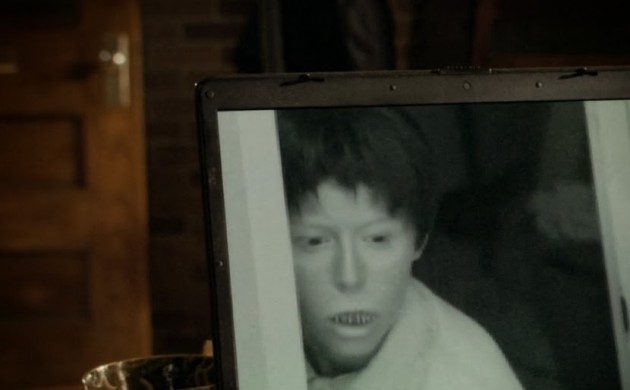 A Monster of the Week

Over the first three seasons, I’ve described the show as a kind of guilty pleasure (yes, yes, I know… people have argued against the very notion of that term, but, in the interest of expediency, I’ll use it and hope none of the naysayers are paying attention… while at the same time hoping one or two yeah-sayers are!). Yes, it’s true that along with the lack of sexual activity, the other overriding Trouble of this town appears to be everyone has the emotional depth of a Hallmark card, but, at the same time, the general framework and the storylines themselves — both in terms of the overarching one regarding what’s behind the cyclical supernatural Troubles wreaking havoc on the titular New England town every 27 years, trying to figure out – against time – what the fate of the enigmatic identity-shifting Audrey Parker (Emily Rose) has to do with it all, and with the specific (“Buffy” and “X-files”-like) monsters-of-the-week – somehow would create just enough interesting twists and clever turns to keep it all going (with even a rare brilliant episode along the way – i.e., the aforementioned time travel one of last season, in which the writers were clearly familiar with how to play properly within that particular Sci-Fi subgenre sandbox, and the wonderfully comic – a quality the show rarely gets right, partially because the performers aren’t particularly up for it, but nailed perfectly in this one – Christmas in July special throw-in episode that ended Season Two, with much of the amusement deriving, similar to the greatest of the humorous “Buffy” episodes, directly from situations that hinge on character).

This latest season had those additional story elements building on the show’s mythos, and they admittedly showed promise. There’s Audrey being jettisoned back out from the mysterious ‘Barn’, the supernatural locus for the Troubles of Haven, forced to pretend she doesn’t remember her Audrey persona (because if she remembers herself as Audrey, a faction of the townspeople believe they can then kill her and that will end the Troubles forever – until, that is, later in the season, when they re-decide that what they have to do is to get this new non-Audrey to fall in love with Nathan – like the real Audrey had been – and then they can kill her – until they receive some new enigmatic supernatural signal that they decipher as meaning they have to now protect Audrey from anyone killing her – okay, yes, it gets a bit daft), along with the arrival of William (Colin Ferguson), this season’s Big Bad (to use a bit of “Buffy” parlance – can you tell I like that show?) who, in the process of revealing his deadly powers, uncovers the exact nature of his previous relationship with Audrey (or Lucy, or Mara, or Lexie, or whoever she is) which is more and more appearing, to Audrey’s torment, to consist of the two of them as once lovers who wilfully created the town’s tragic legacy…. and then there’s Duke’s previously estranged older brother Wade (Christian Camargo), arriving unannounced, looking to escape his failing marriage, yet eventually mucking things up by slowly falling under the seductively addictive spell of the destructive Crocker curse, a family heritage that Duke has been protecting his weaker brother from ever learning about…

Alas, where these were once the saving graces of the show — worthy distractions from all the emo-pandering — in Season Four, they lead to a whole painful cavalcade of characters making blatantly idiotic decisions and story elements filled with the most unlikely of contrivances. From Audrey and Nathan allowing Duke to ‘take care’ of brother Wade (with TLC, I guess?) rather than arrest him (or just detain him for a few minutes at least!) after they have literally just watched the guy go all-out mental with Troubles-induced blood-lust and brutally stab someone right in front of them (a decision which, no surprise to anyone but them I guess, ends up with a whole lot more stabbed-up folk tied to rocks at the bottom of a lake), to Audrey hiding her identity (pretending to still be Lexie) immediately upon jumping clear of the barn (somehow already knowing that Nathan was meant to kill her?), to the previously mentioned contrivance of having to have Nathan fall in love with Lexie in order to then let Lexie kill Nathan (which Audrey is supposed to do) to end the Troubles (made even worse by all the cutsie stuff Nathan is forced to do as the frustrated townspeople keep asking him why he hasn’t gotten Lexie/Audrey to fall in love with him yet, as if we’re watching an episode of “Dawson’s Creek” or something). Then there’s the more specific episode-central problems, like why would they let Jack Driscoll free from the pressure chamber mere moments after he controls his Trouble as if that’s all it took to be certain he’s completely cured (and… you guessed it… he’s not), and Duke’s keeping secret his eventual murder of his power-hungry brother from Nathan and Audrey (who are almost assuredly the only two who would complete understand why he did it – and the two that should feel equally as guilty for the murderous acts Wade ended up committing!).

Even the specific Troubles themselves, while kinda fun, often seem somehow often tacked on this go-round, as if primarily there to keep the over-arching narrative (and the endless emo-stuff) going. And, alas, unlike the previous seasons, there isn’t that one stand-out brilliant episode to at least distract from the stuff that isn’t working.

It was during this fourth season that for the first time I was contemplating on if I was going to follow through on this show to the end… but… eh. I’ve pushed through this far… there’s only one season left (I know, there’s actually two, with these bastards somehow getting away with having doubled up the standard number of episodes and referring to it as a single season)… so I guess I’ll see you at the finish line (unless, you’re like that taped demon’s voice in The Exorcist – ‘We are NO ONE! WE ARE NO ONE!!’)… and, man, even if I’m all alone, I’ll be celebrating it as a victory to be finally done with it.