-Busta Rhymes’ Freddy facing off against Michael Myers, working overtime to inflate his adolescent, egotistical, bad-ass-rapper-image through ad-libbing (I mean, this type of low brow, audience pandering dialogue couldn’t possibly have been scripted, could it?), managing to trivialize and disrespect the increasingly diminishing, once powerful (in that zeitgeist kinda way), boogeyman mystique of the Shape

“Michael Myers is a killer shark. In baggy overalls who gets his kicks from killing everyone and everything he comes across!”

-a Busta kernel of anti-wisdom, a final capping summation at the end of the film, the kind of broad dialogue only a roomful of clueless studio execs with zero respect for the genre could be excited about, castrating what little remained of the franchise, with hack of a director Rosenthal gloatingly holding aloft Myers’ severed penis for all of us once-fans to see, declaring the Shape’s reign officially over (or at least desperately in need of a complete make-over and re-dux, which it would eventually get, through the dubious white trash prismed aesthetic of legendary heavy metal musician turned filmmaker Rob Zombie, which I plan to eventually get to at some point)

Turns out – (garnering mostly a weary sigh at this point) — Michael Myers wasn’t really killed at the end of the last entry following the rampaging adventures of our once favourite iconic masked Shape. And while the twist that’s revealed in flashback at the beginning of Resurrection (allowing for some obvious filling up of the already short running time with footage from the previous film) to how Myers is somehow still alive and kicking, which involved the now institutionalized Laurie Strode (played yet again by Jamie Lee Curtis) having savagely lopped the head off the shoulders of a poor ambulance paramedic with a shattered larynx begging for his life instead of who she mistakenly believed to be her evil William Shatner-mask wearing brother at the end of Halloween H20: Twenty Years Later is at least admirable for cleverly adding a nice little extra helping of debilitating guilt upon the cruel unfortunate life of sister Laurie, it also unfortunately also renders the entire emotional pay-off and culminating bloody familial scene of that previous entry (which, even though it was more than a bit convoluted, still managed to present a fairly satisfying conclusion to what eventually had become more and more, with the corporate decision to dismiss the fourth through sixth “Halloween” entries, a tale of sibling hatred) entirely empty and false (as well as absurdly unrealistic). 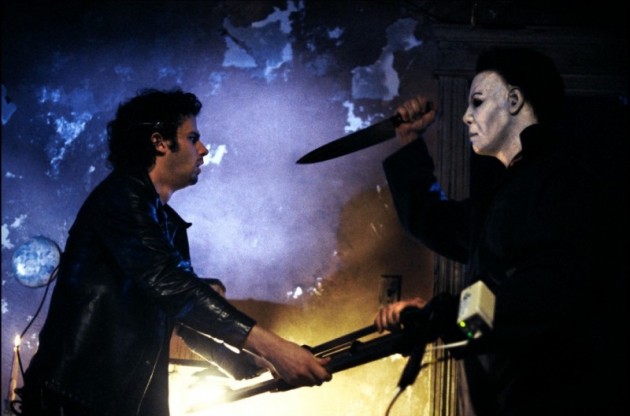 The extended prologue of “Resurrection” gives us another ‘final’ encounter between the two siblings, with one of them again dying (it’s the opening act, so you can guess which one gets it this time – another clue, Curtis wisely wanted the hell out by this point), as we’ve been here before (and done better – the last entry’s director Steve Miner may not be a cinematic horror filmmaking legend by any stretch, but he’s at least a serviceable genre vet filmmaker, in contrast to Rosenthal, a director whose entire mediocre filmmaking career is based upon the genius guiding hand of John Carpenter during his single memorable effort, Halloween 2 over 35 years ago). Not only is the prologue’s payoff ultimately flaccid and tired (while being even more narratively implausible than the ending of the previous one), it grasps at emotional straws that are no longer available (Laurie giving her evil brother a kiss after she’s been stabbed has no resonance whatsoever – like the rest of the film, it’s an empty gesture, with little regard to making sense or having much respect for the film series).

Following that opening act, things grow even worse (and, by that I mean, uninteresting and – the greatest crime any movie can be, far worse than being outright bad – mediocre, in execution and ambition). With Tara Banks and Busta Rhymes (I mean, could these acting choices be any more obvious an example of a bunch of white studio execs trying to speak to what their sheltered corporate perspective sees as the black experience) playing entrepreneurial independent marketing producers looking to make a scary live-streamed reality event by sending a group of hottie young-uns into the haunted, long abandoned Myers house to see what will happen (which is already a pretty preposterous idea — this isn’t the unsealing of an ancient Egyptian tomb discovered during an archaeological dig – I mean, just about anyone can walk right through the front door) and, along with the group of mostly forgettable LA-casting style actors, there isn’t much on the performance front to provide anything but the most fleeting of interest.

And while I’m right in step with the themes of the ultimate destructiveness of the pursuit of fame and celebration (and the embracing of capitalism), it’s just lip service, I guess granting the shallow filmmakers and execs behind the movie the delusion that it’s not just a “Halloween” product, that they’re expressing something important as well. Hogwash. Busta’s character, like the over-confidant Busta himself, is the most gleeful of mindless capitalists (representing a whole slew of the empty-valued black rappers that the corporate music world successfully propped forward, deliberately supplanting the far more provocative and status quo challenging earlier rap voices of groups like the brilliant ‘Public Enemy’) and he’s the hero by the end, of course, spouting off silly lines like the ones above.

Most of the tension involved is rendered ineffective either through things not making sense (how did Busta get an exact duplicate outfit of Michael’s that he trounces around in, with the attempt to create uncertainty on if it’s him or actually Michael? How does he know the exact outfit even?) or because of it revolving around uninteresting actors speaking uninspired lines… or the constant overuse of stings and false ominous sounds (did I mention the director as a hack?).

And about Michael’s outfit, I don’t quite know what it is, but the familiar wardrobe and mask somehow continue to move further and further away from the original look (and associated unease it conjured up). He’s felt less and less a terrifying killing machine to the point where, most pronounced in this go-around, watching the Shape stalking his pray, or popping out of nowhere to strike, conjures up little more than the notion of a random stuntman simply hitting his marks, wearing baggy and ill-fitting overalls, with way too much awkwardly furry hair jutting out of his mask. 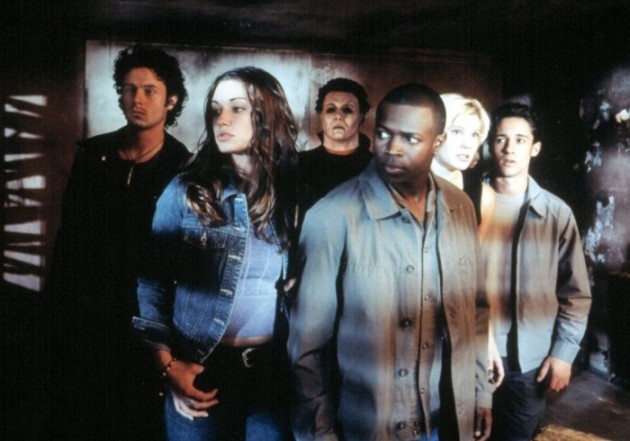 I guess you could argue that there is something interesting both commercially and experimentally (or could have been in the right hands) in the mixing of media and the communicating via modern technology that “Resurrection” plays around with, as the Myers house is filled with reality show cameras (both body and fixed) that follow the characters (and the far too conveniently appearing and disappearing Michael) and other characters watch the live stream on their computers from the safety of their couches with the dawning horror that what’s happening is real (with one teenage boy frantically texting the film’s young heroine he’s been having an online relationship with where Michael is hiding in the house). Yet no one involved proved particularly capable of doing much that’s interesting or inspired with that material, beyond the surface. Then again, perhaps that’s appropriate; that’s what social media is mostly about anyway.