The one that started it at all, for better or worse (well, better for wide eyed and excited budding teens like me, much worse for frothing moralists like the outraged critics Siskel & Ebert); a film so successful it not only primed Carpenter’s filmmaking pump for a few decades of brilliant, influential genre movies, but began a wonderfully perverse little sub-trend of nasty horror known as the slasher film, which ran violently rampant over many a major American holiday for six years and proved so continuously profitable that even the major studios, unable to resist the temptation of the low investment/high reward opportunities staring them right in the face, held up their noses at the unpleasant smell and began producing and distributing them, most notably Paramount with what became the lone long-term competing slasher franchise to “Halloween”; that being the equally iconic, arguably less creatively inspired (though I’d be one of those arguing it – it may not have had a horror master like John Carpenter guiding it out of the gate, but I’d say the makers showed genuine independent spirit and ambition with many of the initial entries, as ranging in quality as they were) “Friday the 13th”, which had that other indelible faceless and unstoppable killer (though with a more sympathetic backstory) that we all knew and grew to love, Jason Voorhees (What? Not everybody loved Jason and Michael? Well, that’s their problem.).

I have to admit, I’m perhaps moving into heresy here, but I can’t say Halloween is a Carpenter film I was particularly interested in revisiting. Where I’ve discovered that re-watching a number of his other seminal works has shown them to retain a consistent level of quality enjoyment (The Fog and Escape from New York, for example) or sometimes has even elevated them into higher esteem (Christine, which has gone from initially a lesser effort in my mind to a really accomplished one with a wonderful, underrated performance by Keith Gordon, and The Thing, which has gone from brilliant, to, I guess, more brilliant, and then even more, more brilliant, and even more even more more…), with Halloween, I find a number of the scenes overlong and the suspenseful quality somewhat diminished, with even Carpenter having said the film could have used some trimming here and there (I mean, how many times do we have to literally watch Annie cross that shadowy back lawn alone before she gets killed? She forgets the car keys, then it’s the laundry, then the dog barking… enough! We know it’s coming, get killed already!).

Someone told me that Stephen King said something to the effect that you can’t reproduce the experience – and that sublime frisson – of a horror film more than once; that the movie exists in a time and a place specific to the experience. Not sure if that’s exactly what he said, but to me that seems like a pretty reductive sense of what ‘horror’ is. It’s not just a jump scare that comes out of nowhere. It can be that, but in the best case, it comes with a sense of genuine dread, surrounded by something deeper and more existential. Nosferatu was made in 1921 and yet it hasn’t lost even a hint of the nihilistic sense of dread that engulfs that film. Bob Clark’s 1974 Black Christmas, the film many have argued was actually the first (and, in my estimation, best and — something that likely worked against the very success of it – most mature) slasher is another horror film that continues to grow in depth and complexity (and, correspondingly, in creepiness and perversity) the more times you see it. Ultimately, if a horror film doesn’t live up to multiple viewings, it’s a failing of the film, not a failing of the genre.

So after recently having happily introduced my 12-year-old daughter to a number of Carpenter’s classic works (in which I’m proud to admit she commented, with nary a single prod from dad, how good the music in his films always is) she asked about Halloween… and I decided it was as good a time as any to jump back in and take a drive down memory lane with a (re)view at the entire franchise with her. To see if my growing distant feelings from the original perhaps would change on experiencing it again, as well as my memories, both good and bad (and some really terrible – I’m looking at you, H20 and Resurrection!) of the various entries throughout, with my only admittedly considerable hesitation being the dreaded reality that I’d end up inevitably finding myself sitting through director Rob Zombie’s double takes on the series. Yet, who knows? Maybe I’ll suddenly find myself charmed by Zombie’s usual mind-deadening and assaultive white trailer trash take on the mythos. Okay. Probably not. But I’ll deal with that when I get there. 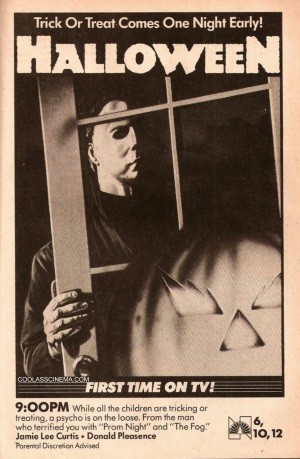 So, seeing it again, it remained the same mixed bag of uber-highs and dismissive annoyances the film has become for me. I mean, the great stuff still remains great. His musical score is absolutely unforgettable (in case anyone didn’t notice) and its simple, driving tones are one of the great and instantly recognizable horror themes in cinema history. His sense of composition with the 2.35 frame is (as was almost always the case, certainly at that time) masterful, with perhaps the most sublimely crafted moment of all being Laurie Strode weeping in the doorway in close up frame left as the assumed now dead – well, assumed by her anyway, for at least the third time! – Michael Myers sits up (yet again!) background right. The moment is so beautiful, so perfectly realized, with the compositional setup forecasting the moment perfectly and filling us with that juicy dread of anticipation (we just know it’s coming)! Halloween is shot and captured by Carpenter with such impressive assurance and confidence, it’s as if he knew he was capturing a legitimately sustaining cultural mythos. Which, of course, is exactly what he did.

There’s so much evocative imagery from the film that’s lodged in our shared memory banks and part of the horror film zeitgeist now. There’s the Shape (as Myers is known in the credits) appearing between hanging clothes in the backyard seen from a bedroom window. The simple creepily captured leaf-strewn suburban streets (with the familiar music turning slower, more ominous). And the brilliantly crafted opening tracking POV shot of little Myers moving in to kill his teenage sister after she’s had rapid sex with her boyfriend (obviously, they weren’t yet privy to the marathon Viagra-enhanced porn sex we’re used to seeing on the internet nowadays, so the boy has little idea how ashamed he should be for his seconds long performance) leading to that wide shot just before the credits of his parents arriving home to find their son, bloody knife in hand, with a terrifyingly blank look captured on his face (with the camera moving back seemingly forever, leaving the three frozen to the spot for what feels like on the border of being an awkwardly long time, reminding me of the amusing end credits sequences for the brilliant short lived TV cop spoof Police Squad!, in which Leslie Nielson and the others would stop in place, pretending they are in freeze frame as things like the open water faucet keeps overflowing).

The slow spots, however, this time had me dwelling on the niggling things, like why would the slightly deranged Dr. Loomis (played in more and more wonderfully and unforgettably maniacal fashion as the series moves along by that brilliantly bent and crazed-eyed thespian extraordinaire, the late great Donald Pleasance, who defined an entire career with this role) visit Michael’s dead sister’s grave other than to conveniently find the headstone missing? And speaking of headstones, why does Michael place it behind a dead girl who looks nothing like his sister in a house that has nothing to do with where he murdered her other than, conveniently again, for Laurie to walk in and find her? And… now speaking of Laurie discovering Annie’s body, it’s hard not to find it a bit eye-rolling having Laurie stumbling back into one swinging or tumblingly revealed body after another (with the Final Girl finding her friends’ bodies all at once eventually becoming one of the main expected tropes of the slasher)… to be honest, it isn’t that far off from OJ Simpson’s epically hilarious death scene in the first Naked Gun movie, in which he first gets shot and then keeps falling back into one absurdly painful set-up moment after another, from mouse trap closing on his finger to stepping on to a rake in his face (and, in my favorite gag, wincing “Oh, no” as he finds he’s fallen against ‘Wet Paint’). And, I must admit, as much as I detest and reject those smug modern wannabe post-modern hipsters laughing at films that they simply don’t get, I can’t actually blame them for chuckling at moments like the door creaking open to Jason in a white shroud (wearing his last victim’s glasses no less) standing still before the PJ Sole’s character whose too stoned (and apparently stupid) to realize it’s not her boyfriend. And, now, speaking of Soles… I have to wonder if that goofy, cross-eyed expression she’s wearing when Laurie finds her body wasn’t some kind of inappropriately silly put-on, or if Carpenter just couldn’t muster a more believable performance out of her.

Yet, none of it can diminish the powerful evocation of simple and pure iconic characterizations and images. A questionable moment is suddenly followed by a haunting one, like the young boy hunkering in the shadows of his home watching in silent, abject horror as across the street the the boogeyman carries a dead girl into the house. And that wonderfully grandiose, knowingly myth-making and sublime ending, where Dr. Loomis looks out the window to discover the Shape that’s fallen to what had to be certain death (with this viewing I unfortunately noticed how the shot and battered Myers doesn’t so much fall back over the outside terrace’s rail as steps backward over some carefully prepared steps to help out the stunt double) has vanished, slipping away into the dark, leaving the determined Doctor staring off into the night and an emotionally destroyed Laurie crouched on the floor reaching helplessly for comfort that can’t be found in his wake.