It’s six years after the events of the Halloween 5: The Revenge of Michael Myers and the Shape (played entirely personality-less by two stuntmen sharing duties, managing to accomplish little other than reinforcing in comparison the absolute brilliance of Carpenter and company in creating an iconic monster out of a guy in work clothes, wearing a William Shatner mask and carrying a large knife in the first two entries) has returned yet again to ravage Haddonfield… only this time he’s got the mysterious Man in Black (and a whole slew of evil cultists) who busted Myers out of jail at the end of the previous entry along with him.

With Revenge having already felt thrown together (though still managing some worthwhile elements, such as the fairly intensely realized ‘young girl in peril’ centerpiece) and Curse revealing itself as a further step down, I’m starting to wonder if the late “Halloween” franchise producer Moustapha Akkad wasn’t becoming a bit of a troublesome meddler in the productions by this point, as “Curse” apparently was as troubled a production as “Revenge” before it. To give perhaps a bit of slack to Akkad (who was eventually horrifyingly killed, along with his daughter, in a terrorist hotel bombing in Jordan), “Curse” began the official involvement of the Halloween franchise with that indie-giant Miramax (under their Dimension Films banner) and those Weinstein boys were known as brutal meddlers, bullies who could run roughshod over any production (along with being guilty of a few other things here and there you might have heard about). Hence, the result being the existence of both a Theatrical cut (which Dimension demanded) and an original Producer’s cut (which I’m not quite sure who preferred, as the writer, director and producers all seemed to be feuding).

Akkad had definitely dug himself a hole with the previous entry six years prior, approving the introduction of the shadowy Man in Black with no explanation to who or what he was, apparently because the feeling was that the continuing story of the rampaging Shape looking to wipe out his family, with the semi-sane raving Dr Loomis on his trail (Donald Pleasance, back again), was starting to run out of steam. And while they might in fact have been correct in their suspicions (especially when you add in, starting with “5”, the unaccountably ill-fitting Myers masks and the stuntmen unable to project much menace from the Shape), the introduction of a Druid-cult looking to control Myers (or something… I mean, I watched both versions immediately in a row and I either kept drifting at the awkward info drop scene with Paul Rudd’s Tommy Doyle character explaining the cult’s intentions – and the importance of the events somehow with some preposterous constellation formations — to a new surviving Strode female heroine, or it just didn’t make any sense… eh, whatever… the worst part is that the scene is even longer in the Producer’s cut, rendering it even more painful to sit through) is exceptionally wonky and feels, at best, ill-fitting with the simple Myers mythology. Introducing the idea that it isn’t necessarily Michael Myers who was evil, but a force that inhabits him, ultimately robs the Shape of his boogeyman persona; kinda erasing his charm, so to speak.

Having Tommy Doyle from the first entry appearing, now grown up (and really weird) was conceivably a nicely clever way to tie it back to the original (they even tried to find the original actor who played him to reprise the role, but couldn’t locate him as he didn’t have an agent), but in execution, with Rudd in his first film playing it in this entirely over-the-top, one note way, is not good. While it was nice seeing Kim Darby (if just from her genre connections with Don’t Be Afraid of the Dark many moons ago) in the part of the deceased Laurie Strode’s adopted matriarch, the cast doesn’t fare particularly well in this one (with even Pleasance struggling to look anything but weary… he would pass away before the film was finished). 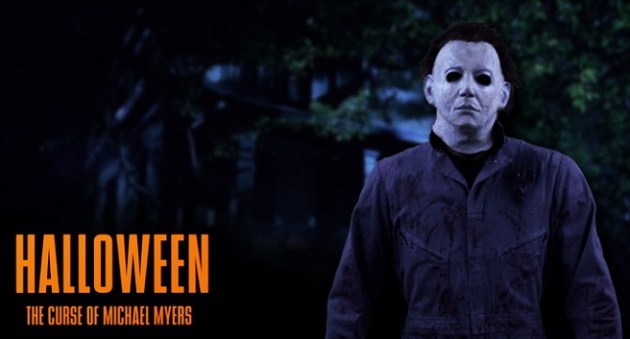 Jamie Strode, the young girl in “4” and “5” is back, but no longer brought to life by the exceptionally tortured presence of Danielle Harris, and things have gone from bad to worse for her, with it revealed she’s been held captive by the cult ever since the events of the previous entry. She delivers a baby at the beginning which spurs a number of “Curse”’s murderous activities along.

There’s some distinct differences between the cuts and, while neither film is particularly good (it’s the worst of the franchise so far), each has a few advantages over the other. Where there seems to be some question on who fathered Jamie’s child in the Theatrical, the Producer’s cut adds a nice bit of perversity by making it explicit that it was her blood uncle, the Shape, guided by the cultists, who is the proud Papa Bear. The theatrical cut, however, while nowhere near a satisfying gore fest, does go a bit heavier on the bloody bits than the Producer’s cut (possibly speaking to Akkad’s stated aversion to gore), with the crème de la crème of the juicy gags being the abusive Strode patriarch’s head suddenly exploding (??) after being high voltage electrocuted.

While Jamie’s fate is realized early on in the Theatrical (again, in far bloodier terms than the Producer’s), for some reason the Producer’s cut has her languishing in a coma for much of its running time… only to have the Man in Black show up with a large gun with a silencer to take care of her (a prop clearly chose for the wrong movie – this isn’t a Bond espionage film, for God’s sake). There’s a few choices I couldn’t figure out why they were revised other than simple egotistical meddling (for instance, having the Doyle character read the opening narration describing the cult in the Theatrical, compared to Loomis in the Producer cut).

The endings are entirely different, with neither being particularly gripping… and the Producer cut’s final twist, which conceivably was opening up the sequels down an avenue of body-possessing evil (in the vein of Wes Craven’s Shocker) in which Myers wasn’t even a necessary component was one that the Theatrical version (and likely Miramax) quickly and rationally dropped.

There is a single, wonderfully inspired creepy moment, nothing more than an aside, that’s worth mentioning… when the Doyle character comes across a young girl dressed as an angel who doesn’t realize it’s a mutilated victim of the Shape hanging in the tree above dripping blood down on top of her, as she keeps saying ‘It’s raining red, mommy. It’s raining red.’ While in the Theatrical cut, she’s merely speaking the words, which does work, in the Producer’s cut she’s singing them, bringing the moment magically – and perversely – to life. Whichever no-nothing moron gave the editing note to get rid of the singing and make her just say the words? Somebody fire that guy.