Exactly ten years after his initial two-film long, slaughtering romp through Haddonfield, Illinois, our favorite unstoppable boogeyman Michael Myers is back, this time – with his original object of killing desire, sister Laurie Strode, now dead from a car accident (having occurred sometime after the events of Halloween 2 and presumably after the producers realized Jamie Lee Curtis wasn’t going to return in the role no matter how much money they tried throwing at her) — out to make mincemeat of Laurie’s daughter (being his niece), ten year old Jamie (Danielle Harris)… and anyone who stands in his way. Of course, where goes Myers, the raving, barely sane Dr. Loomis (Donald Pleasance) can’t be far behind.

After the disappointing box office returns from the singular film divergence into somewhat dubious, though highly enjoyable scifi-ish territory with Halloween III: Season of the Witch, followed by a number of fits and starts in figuring out how to proceed from there, original producer (and franchise-guider) Moustapha Akkad finally decided to return to the basics and bring director John Carpenter’s killing machine, the Shape that inspired an entire slasher genre, back in a story that hues close to the original (including starting with a Myers break out, leaving behind a trail of carnage, during a transfer between asylums, and then him heading back to Haddonfield, with Dr. Loomis hot on his trail, to search out a Strode female to kill). And, what do you know, with Carpenter nowhere around (as him and producer Debra Hill likely sat back and cashed free checks for the film series continuing), while not as inspired and epic as the first two entries (something hard for any filmmaker to achieve, even from the simple novelty side of it), H4 does manage to be an effective and moody entry with lots to offer.

Composer Alan Howarth, who joined the franchise with the second entry (and, in fact, upped the scope and resonance of that now indelible nerve-jangling piano motif that Carpenter created in the first), is back and, while the original theme (and some of the familiar stings) are (sparingly) re-used, Howarth adds some nicely evocative dronescapes. Other than this film, I know absolutely nothing about journeyman director Little, but he certainly displayed a confidence with the material. There is an admirably even keeled pace to the proceedings, often focusing on enhancing a haunted quality hanging over the small rural town, as well as over the fragile young Jamie, still traumatized by her mother’s recent death as well as suffering nightmares of the return of Myers. Of course, there is the requisite killing (though, other than a few vaguely juicy bits, there isn’t much bloodletting on display, perhaps another nod to the lack of grue in the original Halloween, or maybe a sign of how hard the censors were cracking down on movie violence – especially in indie slasher fare – at that time). 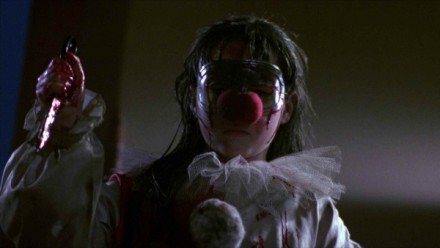 While we know by now that Michael can pretty much survive anything, it’s entirely absurd, after the simply massive explosion in the hospital that ended H2, that Dr. Loomis could return as anything other than a series of lumpy and crispy body parts (let alone how he does, with a burn on one side his face and a limp thrown in for good measure), but, once you accept that, it’s great to see Pleasance back at it, raving on about ‘unstoppable evil’ and acting in all sorts of slightly-out-of-control ways that end up ratcheting up all sorts of unintended violent doings in the town.

Another nice touch in the film is, instead of Loomis having to fight to get anyone to believe him, this time, the entire town, haunted by the destruction Myers carved through it a decade before, is more than willing to believe the crazy old coot. The cops (as well as the cud-chewing townsfolk) arm up, hit their vehicles and start looking. Another positive is, unlike the later, slicker more-LA-casting-friendly entries in these slasher franchises (most notably, Halloween and Friday the 13th), Halloween 4 creates a sense of a real lived-in town, populated with genuine townsfolk hanging at the local bar on a Saturday night.

The ten-year old Harris was a real find as the troubled Jamie and the scenes of her in sheer terror being stalked by the Shape are unsettling. While not as iconic as the original Laurie Strode, she’s still a nice addition to the Myers family mythos. The Shape itself is effectively captured in that often elusive, nightmarish manner (I mean, I’m far from saying Little’s 1.85 framing was as good as Carpenter 2.35, but how many mortal filmmakers were?).

While it doesn’t quite work, I love the clever twist to an idea in the second film, where Loomis chases an innocent boy dressed as Myers (for Halloween) to his spectacular death, this time, with Loomis and the local Sherriff Meeker (good character actor Beau Starr), who has taken over for the retired Sherriff Brackett in the first one (and who will suffer a similar personal loss at the hands of Myers as Brackett did), suddenly confused by being surrounded by a number of Myers look-alikes.

There’s a real sense to -Halloween 4_ that the filmmakers cared about what they were making. Considering all that works in the film (and then adding in the grandiosity of the sensationalistic, perverse shock ending), Halloween 4: The Return of Michael Myers may not reach the heights of what came before (how could it?), yet it remains a solid effort, a pleasurable entry that manages to add to the mythos… and I say deserves more appreciation.