A sort of meta-mockumentary following comedy duos Richard ‘Cheech’ Marin and Tommy Chong as they ineptly do their best to carry out the effort of creating an MTV-style ‘video album’ to accompany the release of their new record (which C&C were actually releasing at the time).

If you thought the increasingly adolescent, scatologically-reliant and druggie humor (well, kinda druggie anyway – without any sense of the underlying political anti-authoritarian and anti–establishment humor that once infused their work, it was coming across more as either antics designed to make kindergarten kids laugh or very strange performance art) of the oft-imbibing comic team Richard ‘Cheech’ Marin and Tommy Chong was getting more than a bit long in the tooth, this 53 minute, cheaply shot-on-video last gasp seemed to put the final nail in the coffin as far as the duo ever getting another shot at another theatrically-driven Cheech and Chong movie. The duo was slumming and they knew it, throwing in any familiar Hollywood faces they could find – including Beverly D’Angelo, Jan Michael Vincent, Cassandra Peter (aka, Elvira), some Playboy Playmates and a few others here and there (fun to see Evelyn Guerrero, a regular in the C&C movies as Donna, appear as one of the two pretty Hispanic women that – no surprise – the mugging Cheech leers at in that overtly harassing style you can’t believe was once allowed as innocent male behaviour).

The interviews of the duo peppered throughout in which they’re lazing about making mostly silly jokes, as well as the cheap, not-particularly-inspired music videos (with Cheech, for instance, playing a punk rocker named Ian Rotten, without any observations whatsoever, cultural or political, on the original English punk scene or one of the main figureheads from the Sex Pistols who the name is riffing on, Johnny Rotten) continue to reveal how little these two likeable lunkheads really have to say on much of anything at all. Stereotyping is really the best they can muster up and – while I have to say, I do enjoy the two personas, as problematic as they are – you can be sure they weren’t winning any spokesmen for cultural diversity awards at the time.

I was surprised to see them presenting themselves within the narrative (which is clearly supposed to veer back and forth between fictional and true) as never actually smoking weed (which we know wasn’t – and isn’t — the case, at least with the unrepentant marijuana-grower and –happy imbiber Tommy Chong). I’m guessing the best the duo could figure out, with the financial returns on their movies growing slimmer with each entry, to re-define themselves was to move away from their image as dope-smoking counter-culture figures (i.e., the best part about them) towards – well – just acting silly. 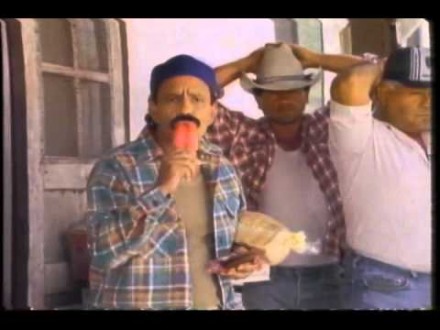 Other than the single moment of the deputy (played by Jan Michael Vincent, who would soon be on his own drug-fueled crash course into obscurity) showing up to harass Mexicans in front of a grocery store that opens Cheech’s “Born in East LA” music video (which, sung to the beat of Bruce Springsteen’s “Born in the USA”, is the one energetic — if still mostly dopy – effort in the show and would within a few years become the title of a Cheech-directed solo effort feature film), and the amusing-because-it’s-so-incorrect rampant sexist antics, including following Chong, bored and uninterested with the filming, who constant harasses every pretty woman on set around him (pushing Cheech to hire not only the two girls he claims are ‘gorgeous’ but their mothers, because they’re underage!), there isn’t much interesting, observant or daring about the effort. 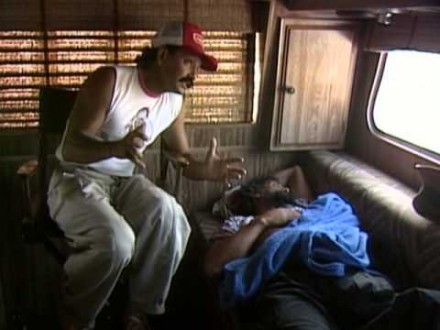 Even with the short running time, I found my mind wandering throughout, wondering if I’m actually going to be able to muster up the interest to make it the rest of the way through this chronological visit of all things cinematic Cheech and Chong, until I suddenly realized… next up is their cameo appearance in Martin Scorsese’s After Hours. Maybe I can.