A sociopathic con woman (the seriously smoking Rebecca Romijn-Stamos), capable of changing her entire identity at the drop of a hat — enabled by the love-struck American ambassador to France that she marries (played by one America’s great modern character actors, Peter Coyote) and his entire security force who somehow have overlooked how cutesy and silly that French accent she’s been wearing for the last seven years is (then again, with De Palma providing all those long luring gazes at her sexily slinking, often strip-teasing form, who can blame them for being distracted?)– gets unwittingly outed by a happy-go-lucky, morally dubious, Spanish paparazzo nicely named Nicholas Bardo (Antonio Banderas), leaving her vulnerable to the brutally dangerous criminals she had double-crossed and hoped to have left behind.

I saw Femme Fatale upon its original release, right in the middle of a personal De Palma film retrospective I was doing, and I have to say, as assured as De Palma’s filmmaking is, I had grown weary of his endlessly swirling camera brashly orchestrated against the most epic of classical music, his bold (Hitchcockian) self-referential cinematic artifice (especially during the suspense scenes), the split-screen effects, the continuous identity shifting (and wig changing) that works for De Palma both in that (again, Hitchockian) mathematical view of storytelling he obsessively adheres to (sheering away more and more from any kind of external logic), but also in that admirably defiant, tongue-in-cheek bad boy determination to provoke the critics who condemn him as a misogynist (I mean, if Femme Fatale isn’t a male’s portrait of the Many Dangerous Faces of Woman, I don’t know what is), all sweetly amalgamated into that colorfully violent and erotic world he dives headfirst into.

Of course, when I write all that down, it sounds incredibly exhilarating, but, at the time, I found the re-occurrence of the imagery, visual motifs and thematics that De Palma uses again and again, even as it continued to become more impressively assured by the filmmaker (especially in the bulk of his later work, like Raising Cain, Snake Eyes, Passion, in which he had reached the career point of dropping any pretense at having anything to say and instead, insularly obsessing over his own logistical neo-noir flights of fancies and logistical script-telling, with his characters moving as pawns across the phantastique terrains he musters up, as well as doing his best to find more and more near-impossible cinematic scenes to pull off, both visually and aurally) becoming too much a means to their own ends, rather than as a powerful and resonant complement or enhancement to a larger story or perspective (something audiences have seemed to tire of as well, as his films have been box office failures for long over a decade now – though, gotta give those cineaste French credit for remaining loyal to the auteurs and continue to help finance him). Femme Fatale seems to me the work of an aging filmmaker; one still entirely energized and vital in his faculties … yet turning more insular, less far reaching, in his life perspectives. 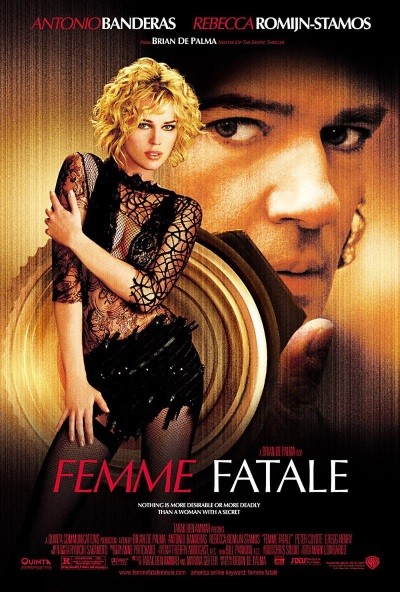 Gone is the socially radical and politically aware filmmaker who started with brilliant Vietnam-era gems like Hi, Mom! and Greetings (not that that can’t pop back up on occasion — almost as an aside to his usual cinema of massive orchestrated style and flourishes, he did return to some anti-war agitprop with the condemnation of actions during the Iraq War, Redacted, in 2007, which sank like a stone, barely a ripple on the pond). So when I first watched Femme Fatale I (and apparently the audiences) was weary to the point of turning a bit resentful (which is also how I experienced Snake Eyes and the other later cinematic candy I mentioned above) and I just didn’t enjoy it at all.

Fifteen years later, however, not as close to De Palma’s filmmaking, I was able to appreciate its audacious cinematic preposterousness a lot more. Out of all of De Palma’s later films, this is the one that is perhaps, from start (with that masterfully constructed yet entirely improbable diamond heist during the Cannes Film Festival) to finish (replaying, in the most over-the-top way imaginable, a series of violent incidents with their outcome now changed due to a re-living of a nightmare), the most bonkers and goes the furthest into his cinematic obsessions (I mean, it’s clear he simply worships film – including the entire history of the medium – as well as, of course, hot, super sexy chicks, which cinema has always been a bit historically partial towards as well) and strips away any concerns for following anything but the internal rules he has decided upon (ellipses on top of ellipses, characters moving in and out of dreams and reality, with little concern with deciphering which is which, other than in the strict diagrammatic form he’s decided on).

Banderas is engaging (though we follow him for half of the movie and then are left wondering if any of what he did actually happened in the story or was someone else’s dream). His bit pretending (as so many characters do throughout De Palma land) to be a flaming gay photographer to first infiltrate the Romijn-Stamos’ character’s world (before realizing she’s a complete nutter) is enjoyably over-the-top, but what else would you expect? It’s De Palma’s world and he’s gonna play it straight (and, by straight, I mean beyond absurd).

So, watching Femme Fatale confirmed a lesson I had already suspected was true. Too many De Palmas in a row can lead to a certain road weariness setting in. Spacing the trips apart, however, leaving each with room to breath (and a fading memory of how he keeps repeating things… a lot), while perhaps won’t suddenly reveal a profound depth to the work (that simply isn’t there, especially in his later work), will still allow a deeply pleasurable and enjoyable experience at viewing a unique, erotically charged, naughty boy of cinema at masterful work.