It’s the gargantuan turquoise-hued Draags (with conch-shaped ears that kept reminding of the Creature from the Black Lagoon, only with no water submersion required) and their enslaved ‘pets’, the miniature (and suspiciously human-like) Oms, on the Draag-dominated, relatively hostile (for tiny tykes like the Oms anyway) planet Ygam.

Terr, an Om boy, is kept as a plaything by young female Draag Tiwa after, as a newborn, his terrified mother was teased to death by a circle of the young blue giants, until managing to escape to find himself in an old abandoned park inhabited by free Oms who distrust the domesticated Oms, as well as all sorts of wild creatures and landscapes… with his new-found freedom quickly endangered, as the Draags begin their periodic slaughter of the Oms that congregate outside their system of slavery.

Crazy how long this animated film, followed as long as I can remember by an air of deep critical respect from all the proper intelligentsia, has been on my radar without me ever getting around to it. So, when I noticed it playing at midnight in New York, on 35mm no less, I was initially super-excited; as it got closer, though, a bit of trepidation started to settle in, as it always does with the approaching reality of watching a movie past midnight – because there is the notion of the ‘Midnight Movie’, which I really, really love – ensconced away in my little safe space of the darkened theater, at the perfect hour for a one-on-one quasi-religious experience with some cinematic oddity, imagining the rest of oblivious society out either partying their face off or sleeping — and then there is the reality of it… and, I can’t say, even in my younger years, I haven’t been guilty of struggling to keep the lids open deep into the Witching Hour. 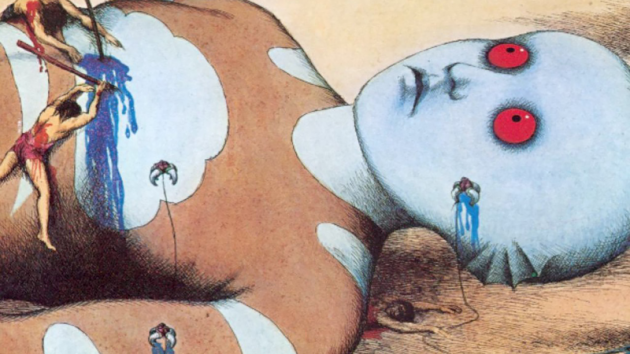 Thankfully, this time my physical being was kind to me (even if I’m rarely kind to it, but that’s another story, one related to aging and the learning of how take care of your body – or to try to anyway – if the goal is to be around for a relatively healthy final act, which I guess I kinda sorta am, if only to stick around for my daughter, as my growing misanthropy has ended my engagement in most other meaningful interactions at this point) and allowed total cognitive awareness for the duration of Fantastic Planet. And, man, I can’t thank my body enough, allowing full immersion into this gloriously mind-bending allegorical epic, wrapped brilliantly within the trippy-iest of trappings, with the crude though amazingly evocative and colorful, Terry Gilliam/Monty Python-like animation (well, that’s as close a reference I can think of, though my understanding is it hues close to Eastern European animation styles) merging with a truly hallucinatory, throbbing, theremin —and other strange sound-infested soundtrack (that I can’t get enough of listening to since I’ve seen the movie, playing it over and over as I work). 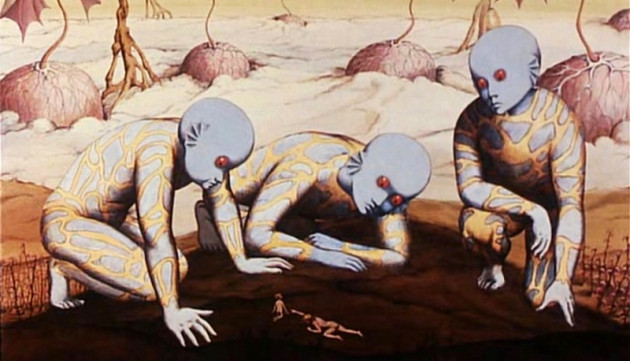 As with much intellectually-based science fiction (an oxymoron, as great scifi is always that, whether its creators are consciously aware of it or not…), Fantastic Planet has a distancing effect as far as emotional involvement (with the focus on the creation of the world, the characters mere pieces to define the allegory), yet it remains a hypnotic experience.

Presenting one cognitive species, the Draags, as having attained a level of spiritual enlightenment for themselves, while concurrently enslaving (and denying the value) of another species, and the other, the Oms, that separates itself suspiciously between ‘domesticated’ (the ‘haves’, or ‘once had’) and the ‘savage’ (the ‘have nots’), with knowledge itself consistently being the thing to withhold and/or to be afraid of in your enemy, Fantastic Planet reminds yet again how great science fiction teaches (and, make no mistake, Fantastic Planet is great science fiction, in big, brilliant, speculative cinematic form) the importance of crossing the imaginative universe to encounter other life forms… if only to get a better view of ourselves.

Filling it out is a plethora of odd, yet gloriously rendered imagery that I have no idea what it all exactly means, but that’s okay. I shouldn’t, in such a brief introduction. In fact, that’s the odd and beautiful coloring filling out the film. For instance, those meditating Draag ‘essences’ that merge as the individual heads of the dancing naked statues on a far-flung planet… just so imaginatively unique in conception. 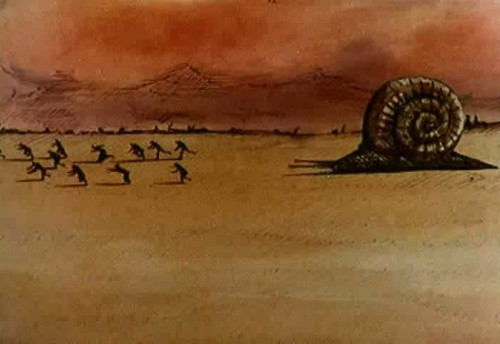 Speaking of something that I couldn’t really make heads or tails of, but remained captivated by nonetheless, that would be a fairly apt description for the short Les Escargot, an earlier collaboration between Fantastic Planet writer/director Laloux and illustrator Roland Torpor (with renaissance man Torpor, I was tickled to learn, having written the novel that Polanski based his brilliant bit of madness The Tenant on), that preceded the main feature. While I admit, my first thought was this unexpected short might provide me just the 10 minute power nap necessary to stay awake for the feature, I instead found myself drawn in to the multi-scale-enveloping worlds created within the cut-out animated style familiar to Fantastic Planet (only even more primitively rendered).

Following a solitary aging farmer on one of a small group of planets (with each appearing to have a planet-sized large woman standing on top of it, rocking it back and forth) who discovers the only thing that will save his crops to grow from dying is his own tears, which then leads to a snail attack, with the snails growing massively huge after eating his tear-fed plants, then on to one of the massive escargots attacking an undressing woman in a nearby city. Yes. You heard that description correct.

An amusing experiment, with its one commonality with “Planet” (at least the one I could find) being its illustrated fascination with scale (which, for me anyway, hints at the notion of worlds buried within worlds buried within worlds, from the macroversian perspective burrowing into the layers of the microversian, with everything part of something larger and something smaller at the same time, and none able to recognize it – something the visionary power couple Ray and Charles Eames would overtly explore a decade later with their brilliant mind-expanding short films Powers of Ten).

While amusingly daft and playful (managing a touch of the poignant as well), Les Escargot ended up not as a sleep aid, but as a tasty appetizer, stimulate the taste buds for the voyage to the Fantastic Planet that followed, an experience that now has me arguing the film (now that I’ve actually seen it) as worthy of being placed right up there with the pantheon of the greatest scifi films ever made.