“My only talent, if you can call it (…) is that I love this little world inside the thick walls of this playhouse, and I’m fond of the people who work in this little world. Outside is the big world, and sometimes the little world succeeds in reflecting the big one so that we understand it better. Or perhaps, we give the people who come here a chance to forget for a while, for a few short moments, the harsh world outside. Our theater is a little room of orderliness, routine, care and love. I don’t know why I feel so comically solemn this evening.”

“Therefore let us be happy while we are happy. Let us be kind, generous, affectionate and good. It is necessary and not at all shameful to take pleasure in the little world.”

— a closing speech, again referencing the importance of theater and imagination, delivered by Oscar’s surviving brother, the ever-philandering yet personable Gustav

“Are you sad because you’ve grown old?”

“Everything is alive. And everything is God, or God’s intention. Not only the good things, but the cruelest and worst. What do you think?”

It’s the turn of the twentieth century. The boy Alexander lives happily and comfortably with his younger sister Fanny amongst an extended family of artists and bon vivants… until his theater company owning father Oscar dies suddenly and his bereft actress mother commits to a prominent bishop, moving into the pious patriarch’s household where his sadistic cruelty and controlling nature, as well as the cold joylessness of his entire household, is quickly revealed, in all its (quasi-fantastical) terror. 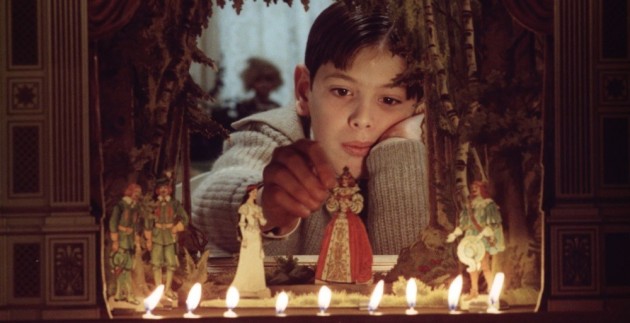 To be able to observe the movement of filmmaker Ingmar Bergman from a storyteller of the austere and intimate chamber pieces that he had cultivated and, by now, mastered with many of his familiar acting troupe (with his previous two, 1980’s From the Life of the Marionettes and 1978’s Autumn Sonata being almost unbearable in their emotionally savage, unflinching bravery) to suddenly create, as a final culminating swan song statement, this lush, beautifully composed, (ambitiously) large scale and rich tapestry – equal parts deeply poignant, horrific and, at times, even truly joyous (something exceedingly rare to Bergman, yet presented in ways no less honest than that of his far more painfully solemn work) — is nothing less than a cinematic blessing; it’s the rare opportunity to watch an artistic master, in full control of his artistry, share his beginnings, his blossoming… and his final statement on what it’s all meant (or its lack of meaning… it’s Bergman after all).

And while, yes, okay, Bergman did go on to make a few random films afterwards (and also went back full time to directing theater), including one additional bona fide cinematic masterwork – Saraband, his actual last film in 2003 (which was a return to that vibrant and scorching chamber drama he knew so well, at 85 years of age!), it’s with Fanny and Alexander that he provided that final statement on all that the director holds dear about cinema, stage and life (just read the quotes above for a taste)… with pieces of his own, often cruelly painful, autobiography strewn about through characters and certain events (the doting mother, the cruel and pious father figure – even the quick image of Alexander dressed as a girl for the religious play, which had much more humiliating and traumatizing connotations in Bergman’s actual young life).

With the first hour-long or so act of the film, in which we get to know the well-to-do large family (and their servants – look quick and you’ll see a very young Lena Olin, who started under the Bergman tutelage — of who favoured indulgent man-child Gustav can never keep his hands off of, to the quiet accepting bemusement of not only his wife, but the entire family) during a lengthy and boisterous family Christmas celebration, Bergman reveals characters both young and old, relationships bitter and filled with hatred, and others full of life and acceptance. The matriarch over the family, Helena, is an iconic (and yet entirely real) one – always worried for her children, yet smart enough to know the ropes (“Why do we all cater to Gustav and his whims?”); she’s the realist, yet also ever naively hopeful. Gunn Wållgren plays the character, as do the entire ensemble each in their own part, nearly flawlessly (I only say ‘nearly’ because I have a hard time ascribing perfection without spending hours on each performance, something I’ll never get around to…. but it might be perfect!).

Moments such as when one of Alexander’s uncles (a bitter man in every other scene than this) taking the delighted Alexander and the other children aside to display for them how to blow out a candle with the powerful wind of his flatulence is a rarity for Bergman, something he achieves often in the early parts of the film, a funny moment, convincingly draped in a caul of nostalgic warmth, through the eyes of the boy Alexander. 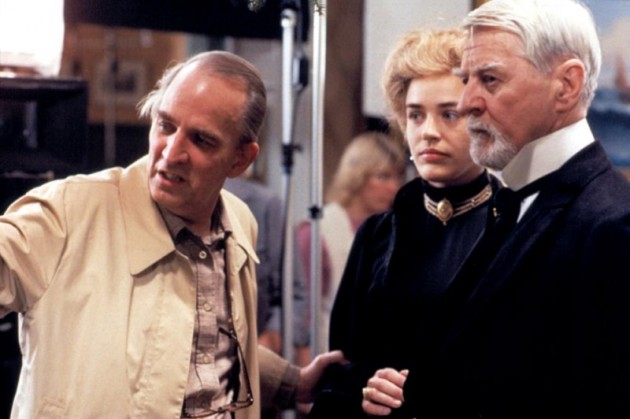 It’s with the second act, with Alexander and his sister moving into the bishop’s home with their mother, that things turn horrifying (and even gothic, with the bishop’s sister being a wheelchair bound deliberately grotesque, barely alive monstrosity) and Alexander’s proclivity for imaginary visions grows the darkest. I’ve always found Bergman’s darkly psychologically tinged nightmare imagery akin to that of the horror film on the most profound of levels (fully externalized in his brilliant Hour of the Wolf from 1968) and the production design, suddenly moving from lush, crimson and comforting to white, spare and imprisoning reinforces this. The bishop, played initially with a stiff sense of inner control, yet turning more wildly terrifying as he emotionally disintegrates at losing control over his family, is a performance unforgettably captured by Jan Malmsjö and is a perfect embodiment for the feelings Bergman has about religion and God; that direction leads to emptiness, cruelty, terror… and the death of life. Man’s created House of God is a gothic pit of existential horror, nothing more or less. 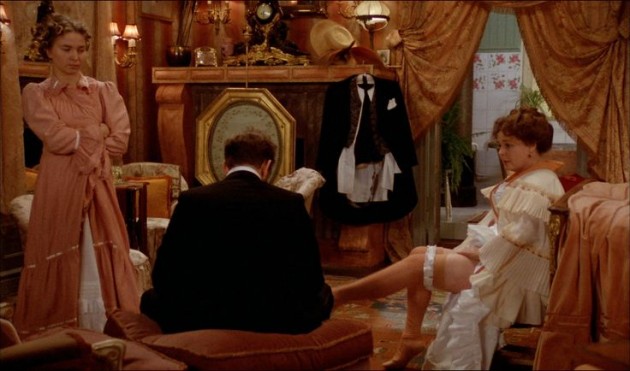 I find one of Bergman’s only directing limitation, perhaps due to lack of interest – and something he occasionally even managed to turn into a formalistic strength with unconventional editing (such as the odd jagged army siege scenes from his great anti-war statement Shame, also from 1968) — is that he was never great with capturing scenes of physical action. There’s one or two moments in the film (such as the awkward staging of Helena’s Jewish love interest Isak, played by the late great Bergman regular Erland Josephson, breaking out Fanny and Alexander from under the unwitting clutches of the cruel bishop) that don’t quite add up, but, overall, the film is so grand, Bergman’s statements so sublime, I refuse to see them as anything other than another part of the master’s personal signature, which he retained until the end.

Fanny and Alexander, at just over 3 hours (that’s the theatrical cut – apparently the television cut is longer), is so filled with the various emotions and experiences of joy, pain, suffering, grief, unaccountable horror, mystery and unexplained flights of fancy, it almost feels like experiencing a full life. A masterful finish from a brilliant artist.