Exterminators of the Year 3000 (Guiliano Carnimeo, credited as Jules Harrison, 1983)

Oh, that lost time in the early 80’s, teeming as it was with these colorful Italian mish-mash “Mad Max”/“Escape from New York”/“The Warriors” rip-offs. Perhaps it’s because Exterminators wasn’t directed by an Italian maestro with a last name of Castellari, or Martino, or Fulci, that it feels less known (at least to me), but I found this one brimming with good wonky fun and action (even if the vehicles chasing each other occasionally seem to be going awfully slow to the point of it feeling like the drivers could jump out and jog faster — I mean, couldn’t they have undercranked the cameras just a little bit?). It might even have the most legitimate premise of all these films, including its obvious source (Mad Max), with the survivors in this post-apocalyptic landscape fighting over fresh uncontaminated water in order to SURVIVE rather than gasoline to zoom around and spectacularly crash their romping-stomping, dune buggy-ing, “The Cars that Ate Paris”-style vehicles in the desert (little aside, always loved the way they say ‘gaaasoline’ with those Australian accents in the “Mad Max” movies) and the action and set-up of the first 20 minutes or so of Exterminators is so gripping and well done, I was thinking this was gonna be my favorite of the lot of this brief but prolific genre-stealing output… before it settled in, slowing down with a bit too much dialogue and time spent with villains less colorful than some of the other entries (there’s no imposing George Eastman around, ready to aggressively engage with an antagonist’s anal sphincter as an act of retribution for killing his male lover in Escape from the Bronx, for instance). 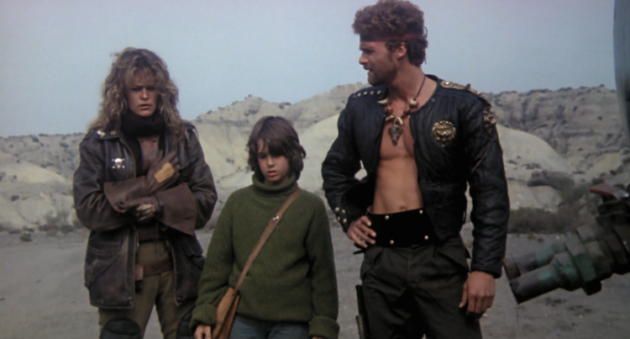 True to many of these efforts, the buff lead Alien (one of a number of simplistic yet oddly creative character name choices) strikes an imposing model-esque figure, helping disguise his limited acting chops (leading to a not-that-surprising short acting resume beyond this post-apocalyptic effort). With his curly hair, head-band and 80’s looks, he’s got a bit of Barry Bostwick thing going on from another of those desert-set scifi apocalpyse films, a rare American example, Megaforce from 1982 (hmmm… just realized I should throw that one on the viewing list). The character is surprisingly cold and self-centered, even for a Mad Max clone, until the end anyway (before that change of heart we know is coming), to the point of slapping around his old girlfriend and leaving the hero boy (whose out to rescue the reputation of his missing father) behind with the villainous gang to literally get his arm pulled off, roped between motorcycles going separate directions, a la, Jennifer Jason Leigh’s unforgettable moment between duelling semis in the cult horror fave The Hitcher (unlike that harrowingly cynical Rutger Hauer-shocker, though, Exterminators ends the scene with a reveal about the boy that kinda dilutes the initial chutzpah in pulling the kid apart in the first place). 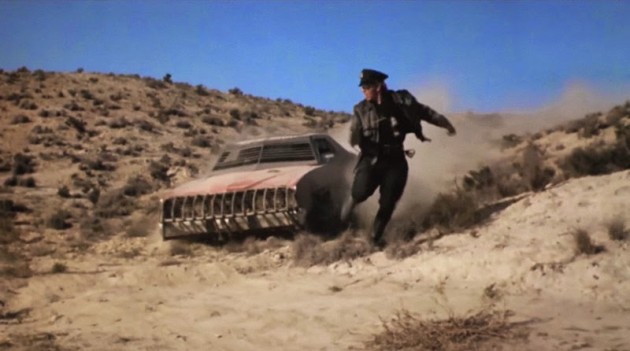 While it ended up not as first level as I thought it was gonna be from its excitingly realized opening set pieces, it overall still has lots to offer, with good action moments and chases, a few wonky yet enjoyable radiation-infected man-creatures… and an ending that, while a bit too happy, is clever in execution (“Alien, don’t tell me you’re crying — wait a minute! Those aren’t tears!”).