T’was another night of exciting cinematic pleasures, warming the frost-tinged cockles against both the winter cold and the stark draconian reality of current life in Montreal, with the latest hysteria-filled government-demanded lockdowns feeling more and more like our own annual winter Groundhog Day, taking place in the hidden lair of that long-running celluloid-only institution’s head honcho himself (with the night’s events made all the more alluring by the possibility of the screening finishing up after the anti-science curfew time, leaving myself forced to dodge those low down dirty coppers in the shadows of the night on my cold walk home).

While director Blake Edwards had a many decades long varied career in Hollywood, I always kinda think of him as a comedy director, considering that’s the genre he dabbled most often in (from his many collaborations with legendary madman Peter Sellers, most notably the uber-successful and wonderful “Pink Panther” series, right on into all his 80’s comedies, like Victor/Victoria and SOB that were much hyped for how ‘racy’ they were – at the time anyway, as now they’d be G-rated), but watching the sure directorial-flourish with which he approaches this San Francisco-set thriller (essentially a filmmaking ‘experiment in terror’, as the title implies) reminds me yet again just how admirably flexible these Hollywood filmmakers who managed success within the province of the studio system could be.

From its stunningly bold pace- and narrative-setting opening set-piece, captured right there on the film poster, with unsuspecting Lee Remick’s bank teller casually arriving home only to be invasively accosted in the dark of her isolated garage by Ross Martin’s sociopathic asthmatic – all presented in a fascinating montage of dutched-angle close ups of shadowy squirming body parts, with the heavy breathing monster whispering his blackmail plans into the ear of our terrified captive only pausing to sadistically take pleasure in guestimating her body measurements as he suggestively pushes against her – Experiment in Terror announces itself as having a pretty keen idea on how to concoct this ‘experiment’ for our leering pleasure (as well as, I just realized, the title acting as perfect description for how we’ve been forced to live our lives for the last two years).

It’s just the kind of cinematically-inspired vision of alluring violation that references good ol’ Hitch (as he always liked to say to his auditioning actresses ‘Call me Hitch. Hold the Cock’) while having enough of a daring modern sensibility to hint at the later, even more deliciously overt, post-Hayes Code cinematic perversities concocted by modern masters like Brian De Palma.

It’s really exciting to see Edwards operating with a keen understanding of the traditional formalism of noir, yet being ahead of his time in bringing many hints of the personal, more intimate (and perverse) filmmaking touches of the later neo-noir. There’s the gorgeous black and white deep-set chiaroscuro-style lighting (yep, I’m talking the shadow of blinds across faces and all) punctuated by sudden eccentric shots foregrounding a focus on the lurid. There’s traditional noir characters marked by a simple fun trademark, like shady police informant Popcorn (Ned Glass), nicknamed as such as he always seems to be pecking at a brown bag of popcorn he’s carrying, mixed with the more complex and conflicted sexually-disturbed creation of Martin’s sadistic blackmailer (who blackmails women into money-making schemes, then kills them for pleasure… only to take most of the money to help a sick young girl in the hospital that he inexplicably cares for, a hint of tenderness that, with nice black irony, directly leads the cops to capturing him). There’s somewhat familiar set-pieces (such as Remick’s teller forced to pull off the heist, as well as the big baseball stadium finale) mixed with odder more inspired moments (such as the aforementioned brilliant opening, and the later one with Martin’s seemingly ubiquitous sadist dressed up as an old grandma – with her wig and big black hat creating a nice homage to Psycho, as well as a reference point for Dressed to Kill – hiding in the women’s room to circumvent the police and nab Remick’s teller yet again). The soundtrack itself, by Henry Mancini is an iconoclastic merging of modern jazz with bombastic old school “Peter Gunn”-like pieces.

Noir regular Glenn Ford (an actor I had an unabated man-crush on growing up, perhaps due to the wide-eyed wonder with which I took him in as a young Clark Kent’s dad in that nostalgia-laden seminal superhero film, Richard Donner’s 1977 Superman) does yeoman’s work as the no-nonsense copper working behind the scenes with the terrified teller to catch the blackmailing sociopath (the introductory phone convo of misdirected conversation between Ford and Remick, in which he is able to gather that she is in danger from a stalker perhaps listening without directly stating it is another bit of real inspiration, executed with style, in both writing and acting). I’ve always found Remick a fascinating creature, not a natural beauty, yet somehow model-esque at the same time. Interesting to see a young Stephanie Powers playing Remick’s younger sister and the threatened object of the blackmail, long before hitting the big time, teaming with Robert Wagner for the early 80’s light detective show Hart to Hart. And amusing to see Martin, an actor whose 15 minutes would come in the form of the disguise-laden trickster Artemis Gordon in the late-60’s silly comic scifi/western mashup show The Wild West, pulling disguises here as well, only much more nefariously creepy ones.

At two plus hours, the film runs a bit out of steam by the end, with the impressively large scale of the last sequence in the baseball stadium not quite making up for the fact that it isn’t as gripping as it would like to be. I’m also not sure the machinations of the plot ever quite make sense, certainly not regarding the behavior of the blackmailer (why does he keep going on with his plan, playing cat-and-mouse with the police, even after he realizes they’re on to him?).

Quibbles aside, Edwards approached the film with daring filmmaking aplomb, managing some seriously stunning scenes, while constructing a bridge from the formal evocations of yesteryear’s noir to the determinedly transgressive and personal neo-noir visions to come. Well done, Blake. Now get on with those Pink Panther films, would ya?!

Of course, it wouldn’t be a Cinéclub evening without the inclusion of a pre-feature cinematic appetizer, carefully selected from the vast archives by curator Monsieur Spurrell… and this night was no different, with the inclusion of British curio Mrs Amworth, an episode from what I’m guessing was some barely-remembered 70’s supernatural suspense anthology the Brits were so fond of, with this particular one dealing with a strange epidemic break-out in a small English village, all while the spirited and social titular elder lady skips about town, flirting with the young lads, throwing outdoor dinner parties and driving around recklessly in her convertible.

With the infection centering around sudden unexplained loss of blood in the night, and one of the town’s more senior citizens having dabbled in the occult (leading to one of those nice familiar games of mental one-upmanship between aging Profs while playing cards that immediately gave me that warm feeling of nostalgia for the traditions of such wonderful British horror films like the vastly underrated 1962’s Night of the Eagle or, as it was known better to us sensationally-minded North Americans once it crossed the Atlantic, Burn, Witch, Burn!), as well as our lady’s long history in the town (and looking suspiciously similar to one of her relatives) – as well with her expressing a questionable sense of freedom apparently unbecoming to not only a woman of her age, but perhaps to one of her gender at all (it is a Brit show, after all, so gotta expect a bit of that puritanical thought to creep in there) – it’s not particularly surprising where the half an hour is heading (vampires, anyone?).

Relatively straightforward in execution and with a surprising lack of a plot twist to end on (by far the most unsatisfying element, as, even if it doesn’t work, you expect some kind of narrative curve ball with this kind of story), there still remains an overall nice eerie atmosphere to the old village setting, as well as a few effective (if not particularly original) slow motion shots of our vampire lady running in her billowing night gown through the local cemetery and an impressively executed early long-moving shot following Mrs Amworth through her dinner party that manages to introduce, through snippets of caught dialogue, all of the characters and plot threads. 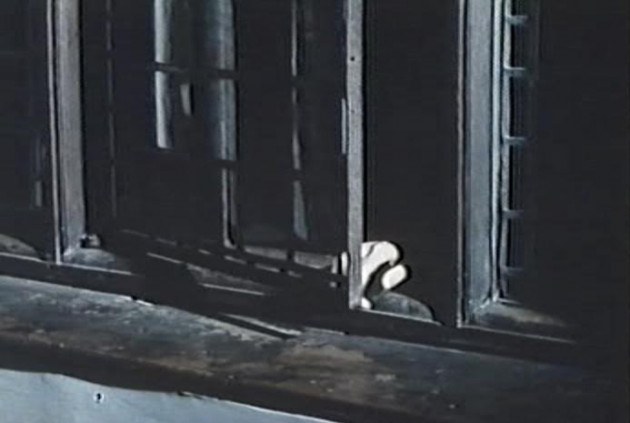 The most resonant element, however, by far, was in the topicality of its epidemic plotline, with some of the dialogue particularly landing:

“The infection keeps spreading. These so-called emergency measures seem to have no effect whatsoever.”

You know. No effect whatsoever. Kinda just like the vaccines. Another curfew, anyone?

“Are you taking blood samples from everyone?”
“Everyone who’s agreeable. We can’t make it compulsory.” 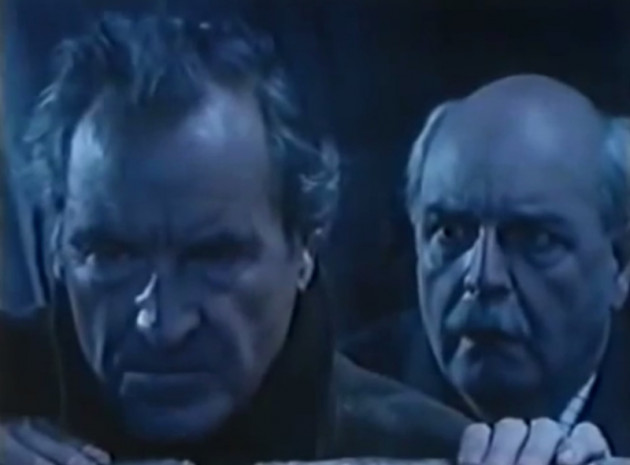 Can you imagine? There was a time where officials didn’t even consider making jabbing needles into people’s bodies compulsory. Then again, who knew that vampires like Mrs Amworth would grow into far larger more controlling monsters with names like Pfizer.

So after that, the screening night over, I bid a good night and stepped out into the frigid night, steeling myself against both the biting cold and the patrolling cops ready to take down anyone daring to not do what they’re told (editor’s note: I made it, safe and sound).