‘I thought you were dead.’

‘I thought you’d be taller.’

(the new location-appropriate mantra in Escape from L.A.)

Bad mofo Snake Plissken’s back, as misanthropic and cynical as ever (while Kurt Russell was well into making a Hollywood bundle already, I certainly hope he understands how forever grateful he should be to director John Carpenter for thrusting him up into genre iconic status with their four films together – and that’s without even considering their fifth, the telemovie Elvis, which I’ve heard isn’t bad either) recently arrested yet again, for a slew of terrible new crimes, sent off on another suicide mission, this time via mini-submarine to the sin-filled, decadently lawless prison known as Los Angeles in 2013, rendered an island by a series of earthquakes (thankfully, the New Bev doesn’t draw the young arrogant hyena crowd, that insidiously growing group of literalists and cinema hijackers unable to decipher metaphor, let alone irony; so fortunately there was no mindless cackling and pointing when the year was shown on the screen) to retrieve a stolen super weapon… as well as to terminate the evangelical President (Cliff Robertson)’s daughter Utopia (A.J. Langer) for having helped the theft… all while having only ten hours to get back before the deadly toxin the nefarious military fuckers have injected him with can give him the cure before it kills him (gee, this is all sounds… somehow… familiar)…

For those horror-aficionados privileged (and old) enough to have had the development of their eager and impressionable minds parallel with the exciting rise of those inspired boundary-pushing American genre cinema filmmakers who thrived in the 70’s and beyond – I’m talking the likes of Romero, Craven, Hooper (and Carpenter, of course) – those magnificent presenters of early gore and perversity who Mick Garris would eventually coin as the original Masters of Horror, along with wallowing in those glorious times, most of us also remember the sting and disappointment at wonder’s end — the loss of innocence — when each of these masters, with varying degrees of severity, showed creative chinks in their armor.

For Carpenter, that moment came, full force, with Escape from L.A. (I guess really it started the year before with his dismissed Village of the Damned remake, I just don’t remember anyone even seeing that one); universally despised and a dismal box office flop, many of us, including moi, never bothered to go back and re-watch it since that first theatrical screening (especially as the films just kept getting worse, with the battle-scarred filmmaker moving, it seemed, into self-protection mode, sitting lazily back, engaging in weed-influenced tangent filmmaking, and constantly reminding his fans at conventions how little he gives a shit anymore). 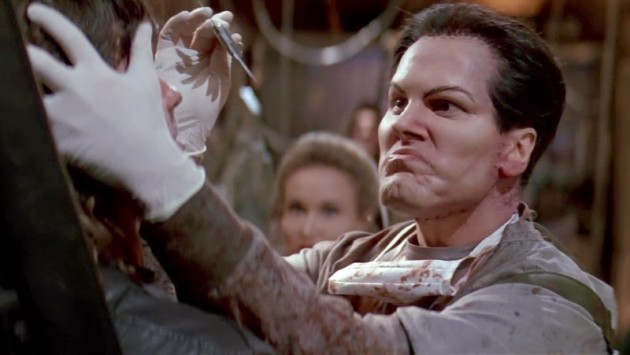 So… the opportunity presented itself, on my last day wandering about (that is… driving, of course) in LA (how much more perfect could the stage be set?) to “Escape” again, some 23 years later… and, what can I say, after watching it again?

Escape from L.A. remains a tremendously wonky film, with a lot of jaw-dropping clumsiness … and yet… I think it’s time for a re-appraisal.

Yes, you could call it narratively lazy, following, as it does, the exact story outline of the first film (I mean, exact). And there’s no doubt that while it takes place in a similar future dystopian landscape from its “New York” predecessor, “LA” looks to be done with half the money (when in fact, it had something like seven times the budget of the first film!).

From the unconvincing cartoon-like collapsing buildings, to the poorly rendered CGI-created mini-submarine underwater scenes (replacing Plissken’s hang-glider arrival into “New York”, done far more effectively and strategically, with a firm understanding of its budget limitations) that don’t even seem to be trying, and on into Plissken joining Peter Fonda’s Pipeline character in a jaw-droppingly silly-looking ‘surfing the tsunami waves’ scene, man, oh, man, there’s a lot that is… let’s say, off, in the film.

It’s all true… and yet… having had twenty odd years to get over the fact that this Plissken adventure was no “New York”, I found myself suddenly able to get past the once mind-numbing, disdain-creating flaws… and actually see the goofy strengths. What really stuck out to me this time is Carpenter’s riffing on replaying the same Plissken tale, only this time not from the gritty, grounded and resonant Big Apple perspective (which, as Mick Jagger said, if you take a bite, ‘don’t mind the maggots’) to the grotesque and absurdly surface-obsessed LA landscape (I discovered recently that Carpenter even described the film somewhere as ‘Snake goes to Hollywood’ or something).

From the amusing change in what everyone says upon seeing Snake (following right along with the smaller stature than we expected upon running into some Hollywood star we’ve known for years), to the trans criminal character played by Pam Grier who replaces Isaac Hayes’ decidedly hetero gangsta ‘The Duke’ from the first, to the surgically monstrous Surgeon General of Beverly Hills played by Bruce Campbell, to the switching from a violent battle-to-the-death in a boxing ring to a game of basketball horse (in a town obsessed with the game) for Plissken to win over the ugly hordes and claim his freedom, into Steve Buscemi’s Map to the Stars Eddie, a character as slippery and morally vacuous as the best/worst of any Hollywood agent, and right on into Peter Fonda’s hippy dippy surfer dude and the finishing battle royale at a Disney-scale (well, it wants to be, anyway) amusement park, you could almost imagine a slightly high, mildly geriatric Carpenter amusing himself with these not exactly deeply inspirational, yet amusing nonetheless, concoctions; ones critical of the glitzy, fun and empty Hollywood scene, but in a playful way.

Nothing has anything close to the emotionally resonant moments of the first – say, when Adrienne Barbeau’s Maggie gives her life to save her aging love, Harry Dean Stanton’s Brain – but what do you expect? This ain’t no New York story. It’s LA. Things don’t get quite as deep here.

It’ll never be anywhere near as close to the genre zeitgeist as “New York” is (no matter how much Carpenter now claims it as a better film), but “LA”’s amusing charms and clever commentary announced themselves to me much more on this second, many years later, viewing (the years allowing myself not only forgiveness for those really terrible CGI effects, but – with a slight favorable twist in my perspective — almost seeing them as a part of the overblown cartoon that is Hollywood life in the City of Angels). And, as much as the film remains as preposterously silly as the land its spoofing through most of its running time, its grand finale, while following the same narrative path as the first, reveals itself, with Plissken’s act (and statement) of ‘shutting off the world’ as far more (surprisingly) nihilistic than the first.

Why, hell… leaving the theater I thought… I’d even be up for a third Plissken adventure, if these old geezers could be dusted off and find a new landscape to tell the same story off of. 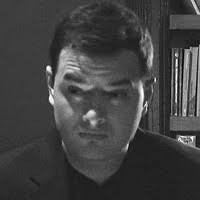 Abel Alegria holds a Masters in Film Studies, Graduate of Concordia University. Former representative of CSBC (Concordia Broadcasting), administrator and coordinator at CUTV (Concordia University Television) and director for “Fade to Black” Student Film Review. As of 2017 he is a Project Manager and Online Content Editor for IIHL-IILH and currently a guest contributor and media editor for online monthly film journal, Offscreen.