It was another night of what’s becoming regular screenings at the private domicile of Le Cinéclub/The Film Society head honcho Phil Spurrell, this time with celluloid projections of two scifi curios from the recent past (hey, I deem anything within the last 50 years as recent, so deal with it).

First up came the tv movie Earth II… and if the stark white hallway designs of the eponymous space station, the attempted ‘intellectual seriousness’ of its story approach, and the camera’s fetishistic leering at the gliding space ships and the aforementioned revolving station alone didn’t make it obvious the Earth II producers were trying to conjure up some of that 2001: A Space Odyssey magic (with that cinema-changing experience having opened with a splash three years before, with successful re-releases way into the 70’s), the casting of Gary Lockwood straight out of the Kubrick film as one of Earth II‘s lead astronaut administrators pretty much nailed it. 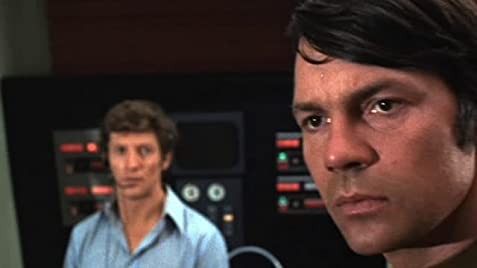 Of course, this is a 70’s television production (specifically, a pilot that never got picked up) so there’s no way it was gonna do anything but suffer in comparison to the 70mm grandiosity of Kubrick’s speculative space voyage. Lockwood, for instance, is used by Kubrick for the very reason he fails as the lead in Earth II; (as with Kier Dullea, the other “2001” astronaut) he’s a performer with little natural charm or much camera presence. Kubrick was well aware of this and deliberately (and daringly, considering these were the two leads of his big budget film!) chose the two actors to crystallize his ironic theme of man receding (‘becoming lesser than’) in contrast with the overwhelming presence of the technology they’ve created. 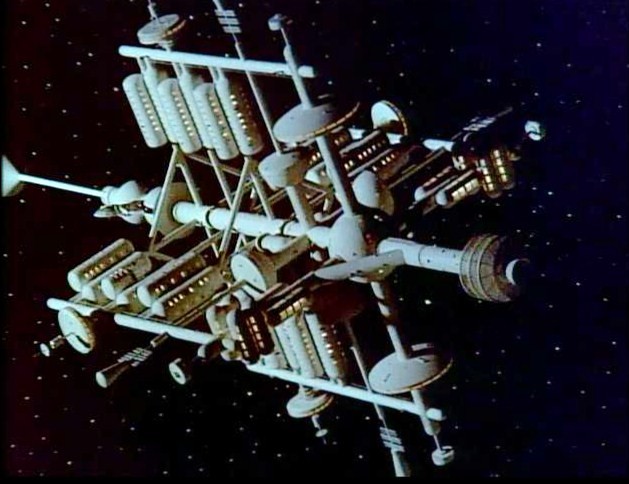 And while I’ll always have a soft spot for Anthony Franciosa (mostly because of his presence in Dario Argento’s Tenebrae a decade or so later), with his poofy hair, big glasses, and lilting delivery in this film, it’s hard to see him as anything but a more than a goofball… with nowhere near the gravitas to be head man in charge of the thousands living aboard the new space station. 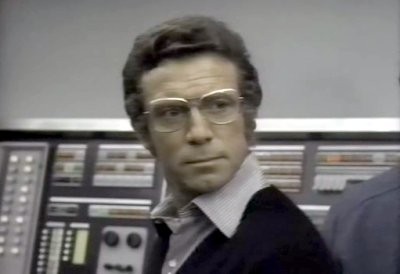 On their own, the space miniatures are fun, but by shooting them in the style of Kubrick’s 2001 (as Robert Wise would do, also clearly referencing “2001”, though far more impressively, with Star Trek: The Motion Picture in 1979), instead of creating the hoped-for sense of awe and magnificence… only ends up making it all look… well… underwhelming, drawing attention to things like the slightly awkward staggering of the revolving space station and the lack of any fine details in many of the models.

The conjured up ‘D&D’ (Discussion & Decision) process, called at any time whenever an administrator feels it necessary for a decision to be made, implemented in this new attempt at Democracy on Earth II is kinda fun (with amusing ‘objective’ teletype listed under each speaker as they’re given the floor and presenting their arguments – with things like ‘His conclusion is emotional based, not fact based’ and ‘That assessment is based on verified information’ – leaving anyone in the twenty-first century naturally wondering who the ‘objective’ party in charge of doing the typing is) and the idea of the Earth citizenry now voting by each home turning their lights on or off at a certain hour for a ‘head-count’ by Earth II above kinda leaves out anyone who isn’t a homeowner (as well as anyone with an unfortunately ill-timed power outage), doesn’t it?

All of these low-brow and silly aesthetics, naturally, can be easily overcome, overlooked (or even be revealed as charming parts of the experience) if the tale is engaging, the scifi concepts stimulating. Alas, with a narrative centered around Cold War conflicts (first, with an opening scene of a lone ‘Chinese’ scuba agent off Camp Canaveral shot dead by Navy officers just before he can destroy the take-off of the intrepid administrators up there to Earth II – which leads to the obvious question… could a single rifle shot really take down an entire space ship taking off?? If so, makes the whole operation seem unsettlingly fragile, that’s for sure – and, second, with the major plot twist being the discovery by the occupants of Earth II of an armed nuclear warhead in space pointed at Earth… with suspicious Chinese symbols on it), the supposedly ‘inclusive’ population of the station still basically led by white males (Americans, no less), Earth II ultimately comes across suspiciously as Western world military complex propaganda (the better to get the approval and support of NASA and the US government, as the show’s final credits reveal). 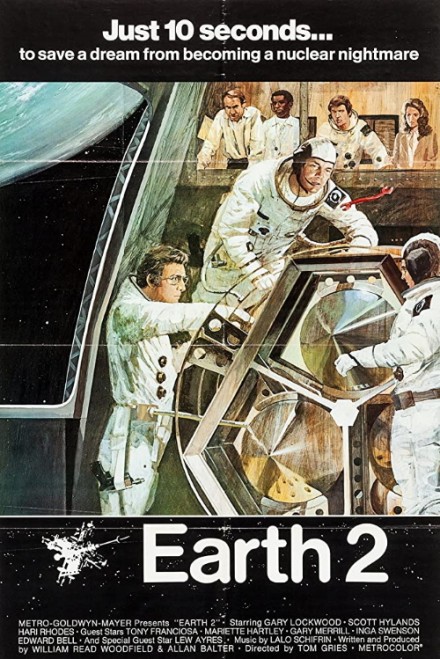 There’s a number of events that occur to bolster the drama that are almost comically conceived; such as the Mariette Hartley character, acting against orders (yet as any good liberal would), managing to jettison the nuclear warhead they’ve put aboard the station for the administrators to figure out what to do with (in a good ol’ D&D meeting), towards the sun to explode when it gets close enough… or at least that was her plan… as the silly emotionally-based unit thought just pointing it at the big old bright gassy ball in the distance, mere millions of light years away, and propelling it in that direction would get it there… (ah… women… what can you do?… other than next time, don’t let them near the eject buttons!) only to be informed that the gravity pulls of space now have it on a direct collision course with… Earth! As I’m sure it’s no surprise, the planet will be saved and the warhead destroyed, with the Hartley character (and the Chinese) getting a gentle yet firm slap on the wrist for their behaviours by the male authority figures.

Another eye-rolling contrivance, one attempting to create a dramatic philosophical conundrum, finds the main Russian astronaut, with wife and just born child on board, getting an electric shock so bad while trying to initially disarm the bomb that his distraught wife has to immediately decide, Sophie’s choice style, to either operate right on him right away, in which her noble husband will either die or recover entirely, or do nothing, which will leave the proud Russkie diminished of his physical and mental capabilities for the rest of his life (and this all comes from an immediate doctor’s diagnosis off an electric shock!)….

The milieu and setting of Earth II is a bit flimsy for continued weekly tales, so it’s not surprising it wasn’t picked up as a series (and if anyone wants to watch a far more interesting and thoughtful foray into genuine East/West Cold War dynamics, check out the unfairly maligned, highly entertaining 1979 disaster pic Meteor).

What seeing Earth II did provide though was the impetus to finally entangle the mishmash of failed tv scifi pilots back in the 70’s that I’ve had merged together in my mind for as long as I can remember… and that I now realize (with a little bit of internet help) consist of three – the first being, naturally, Earth II, the second being Gene Roddenberry’s also confoundingly sequel-sounding Genesis II from 1973 (which also starred Mariette Hartley, helping further the confusion) which, when that one failed, the famed Star Trek creator re-worked into the third entry in this convoluted web of content, namely, another failed pilot called Planet Earth just a year later, which sounds like it could have been a prequel to Earth II, though it wasn’t (never mind the fact that Earth II seems to have done some brief theatrical time with the theatrically revised name Earth 2, which is the same title as a single-season scifi show in the 90’s, also set on a space station revolving above Earth, how can anyone get this stuff straight?).

An aside: I’m thinking it was a fool’s errand to name a show with a two in the title… while it might stimulate the members of the more intellectual-minded scifi circles – as they’re all about replicants and alternate worlds and all that doubling stuff — for average television viewers? They’re more inclined to think they missed the first one, so why jump in now?).

I also discovered the resourceful – though also clearly bull-headed – Roddenberry would re-work the Genesis II material yet again, just another year later, this time calling it Strange New World… with the same outcome, as no network ultimately picked it up for a series.

The short film The Visitor, meanwhile, based upon a Ray Bradbury tale (that I admittedly haven’t read), ended up the much more satisfying entry for the evening. Taking place on Mars, where the dying members of a small colony of Earth outcasts, exiled to the Red Planet because they’re afflicted with the contagious ‘blood rust’, of which they will each die within a year, are initially mesmerized by the latest human brought there, realizing not only does this visitor carry the disease… but also has the power to grant ‘virtual reality’ illusions of alternate worlds to anyone he wants, leading them to ultimately brutally fight each other for control of this mysterious man and the last gasp of hope he affords. With its tragic conclusion, The Visitor may be a bitter tale… yet it still offers a poignant glimmer of hope, implying rekindled imagination brings life.

Of course, while the virus catalyst of the set-up obviously makes the story timely, the distinct difference is the disease of the story actually endangers the continuation of human life on Earth, while our current Covid-19 predicament comes nowhere close (as I tell most anyone around me, ‘Don’t worry! Fear not! The Coronavirus is a blip. Nothing more. Take comfort… it’s still impending climate disaster and likely nuclear war that’s going to end us as a species!’).

With its decent budget, nice color photography and the impressive pedigree of the adapted author, The Visitor is the kind of morality tale in a fantastical setting that could have easily fit (as is) into the wonderful first re-vamping of the Twilight Zone in the 80’s. Strangely, I could find almost next to nothing about either the film or its director, Buz Alexander, on the internet.

Kudos to Monsieur Spurrell for finding yet again an obscure gem deep within his vast warehouse basement vault for a night of viewing pleasure (and, what the hell, even Earth II was worth a look so I can at least say I’ve seen it).