Ex-fest, that annual 12 hour feast of exploitation films, all projected on wonderful celluloid, kicked off in style with this Shaw Brothers kung fu romp. And while the festival’s first 3D presentation was a bit murky – and even though there literally were specially designed 3D glasses for this particular film, I still always find myself feeling annoyingly inadequate at trying to visually adjust to old school 3D projection (I mean, I experience the shit comin’ at ya and all, but the various simple layers of depth within the frame always seem to get muddy) – the film itself is a lot of fun. 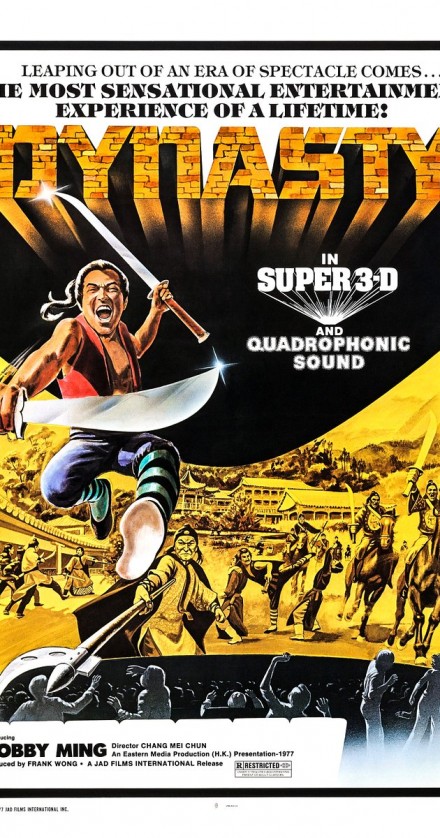 It seems a story about a battle between the kung fu forces of an evil emperor and the exiled upstart prince (and his followers) looking to overthrow him. At least it starts out that way, but I kinda lost the plot along the way, as various fighting warrior characters and internecine motivations emerge about a 1/3 of the way into the film after the prince is found suddenly dead. Putting myself dangerously close to revealing a culturally ignorant colonial perspective – with my only perhaps flimsy excuse being a scratchy print and distracted struggles with the 3D – I have to say I couldn’t always tell which character was which – that is, until just beyond the halfway point when a undiluted revenge plot emerges and a trifecta of mad kung fu wielders takes us to the quick kicking, high jumping and sufficiently violent conclusion. Before then, characters seem to get introduced and disappear, including an eager and impressively skilled acolyte (who had all the earmarks of becoming a pivotal character) who breaks into the emperor’s bedroom not to assassinate him but to prove his abilities – which seems to lead to the duly impressed emperor, a feared warrior himself, to not only accept him in his ranks, but towards some more unexpected intimate desires (after all, they are in his bedroom)… think of Laurence Olivier dripping with lasciviousness as he compares the morality between eating oysters and eating snails while being bathed by the strapping young innocent newbie Tony Curtis in ‘Spartacus’ and you’ll get the picture.

While I’ve never been one to seek out these 70’s kung fu films (of which, similar to the genre exploitation films pumped out by the Italians many moons ago, it seems the Chinese film industry and the Shaw Brothers Hong Kong studio couldn’t churn enough of these out), just about every time I do watch one, I’m blown away by the high flying stunt and fight choreography in which — with all those blades, feet, hands and every other absurdly inspired made up weapon they could think of spinning around within inches of each other’s faces — that a cast of hundreds must have gotten seriously damaged during the making of it.

Speaking of weapons, if there is one thing the film understands is you can’t just keep having these faceless warriors fight the same fight with just feet, fists and swords, so all sorts of unbelievable yet charmingly inventive (and personality-creating) weaponry is introduced. There’s a fighting monk’s shroud that suddenly folds together and turns into this long hard phallic weapon (that makes a really funny whipping noise and is jammed straight into our faces again and again) and the main baddie emperor’s golden vest suddenly morphing into a razor sharp boomerang (defying all laws of physics as this massive and heavy object whips around like it’s a little thing made of balsa wood), as well as these long deadly tongs that the carriers whip out to behead their enemies (shooting at us then oddly clamping together inches in front of the screen – or passed the screen with the 3D! – without a neck visibly clamped around – only to be pulled back, now with a severed head in it). And then there’s the one monk who either has a head made of metal or a really thick skull or something, who – just as he’s about to die from the emperor’s metal bear claw punctured entirely through his stomach – bangs the emperor in the back of the head with his hard head and gloats through bloody mouth the final words that somehow this will cause a lessening of the ruler’s power for exactly seven days (forget trying to figure it out… just roll with it). 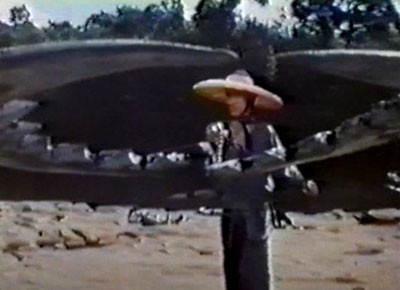 There is some impressive cinematography and a nice use of the landscapes, with large numbers of men on horses galloping along in various pursuits. And, of course, there are a ton of objects thrown at you, including right in the middle of those almost supernaturally swiftly moving fight scenes, in which the action awkwardly hesitates to allow a fighter to deliberately move an object forward, then back, then forward, then back… before continuing back to practically light speed to continue the scuffle.

All in all, a nice start to another Ex-fest.