In a mythical land, young square-jawed, blonde-locked Siegfried (Paul Richter), the son of a King, forges a sword then heads out on a long journey in search of the Kingdom of Burgundy, determined to marry Kriemhild (Margarete Schön), the princess who he overhears the grimy swordsmiths speak glowingly about. Along the way, he fends off all sorts of fantastic and dangerous creatures (including a large fully constructed dragon that’s impressive to witness, with it’s moving long-necked head and swishing tail, even if the rest of it is mostly stuck in place), acquires a treasure (from the titular Nibelungen people, whose presence is so minor I must be missing something as to why the whole epic is named after them), as well as the supernatural powers of speaking with birds, invisibility and invincibility (after washing in the blood of the dragon he has slain, except for one little spot that an unnoticed lime leaf covers on his back shoulder as he bathes leaving a single point of vulnerability that, of course, in time-worn legend tradition, will come into play by the end of our saga) and becomes a king with a small army. Arriving in Burgundy, he woos Kriemhild with his gold and affection, they marry… and then the real political intrigue and internecine warfare kicks in gear.

The action-packed second part, centers around – as the title suggests — the grief-stricken Kriemhild (hint; things didn’t quite work out for Siegfried at the end of Part I) as she carries out her nefarious plans of vengeance for terrible wrongs done to her by, amongst others, her brother the Burgundy King (Theodor Loos) and his main henchman, Hagen of Tronje (who, you have to wonder if he sleeps in that massive helmet with those huge wings adorned on it – he’s gotta have some seriously strong neck muscles for his head not to just lull to the side from wearing it all the time) by manipulating love-smitten King Etzel of a nearby kingdom (the wonderfully crazed, larger-than-life presence of the greatest of Lang players in that German yesteryear, Mabuse himself, Rudolf Klein-Rogge) into leading his warring Huns against her own kingdom, with the goal of the destruction of the Burgundy ruling elite. 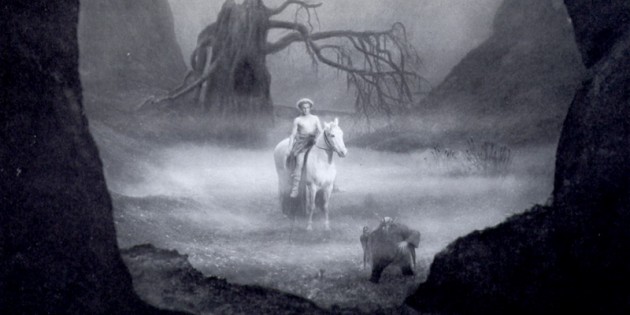 With both the massive-scale productions of the serial-style action adventure of international intrigue, Spiders (which was just about four hours long) and the darkly brilliant and nihilistic quasi-supernatural crime film Dr Mabuse, the Gambler (which also approached four hours) under his belt in just three years (while, mind you, also included directing six other features, including the brilliant Destiny, and writing a slew more), the already-infamously dictatorial German filmmaking legend Lang apparently couldn’t get enough, jumping right aboard, almost immediately after Mabuse, on helming (and writing with his now-steady collaborator and wife Thea von Harbou, who – in an example of decadence and opportunism right up there with the best of any Hollywood tale — he had wooed away from her previous husband, who happened to be Lang’s greatest German actor, Klein-Rogge, even though the three continued working together) this monumentally massive epic silent screen fantasy (based upon a famous poem)… but now upping the running time to almost five hours! With the massive stress and strain, both mental and physical, required from helming this many Peter Jackson-style uber-massive productions, I can only imagine how many years he shaved off his lifespan (true, he did live to 86 — but I’m betting he would have lived to over a 100 otherwise!).

True to its subtitle, the first of the two parts (Nibelungen, as were Lang’s previous two epics, released in two parts, in this case two months apart) follows the innocent (and relatively bland) heroic Siegfried as he makes his arduous journey through the deadly, entirely studio created landscape, gathering strength, treasure and arms. And while, with its staggeringly huge and fantastical sets (including forests with trees that appear to go on forever up into the sky and barely-seen swamps bathed in massive banks of fog) and phantasmagorical creatures and monsters he meets (the gnarled tree-dwelling King of the Dwarves is a particularly impressive example of a mostly brilliant lot) are massive accomplishments (to be clear, I have little patience with creatively-challenged viewers who watch these kinds of films and, completely oblivious to the blessing of being granted a portal in time taking us back to as far as 100 years ago, can only dismissively cackle like hyenas because, say, the effects work doesn’t appear as real as the CGI they’re used to, with an empty hole in place of an ability to recognize how magnificent so much of something like Nibelungen is, with the almost avant-garde feeling to the sets and its creations, in evoking, transporting a willing audience into a fantastic dream-like world), ultimately it’s Part II, with its vast scenes of battle, in which you just know tons of the extras had to have gotten hurt under the shrieking commands of this madman director. The grand finale, a profound ending taking place inside and before an actually burning castle (that must have been a terrifying and tense couple of days on set for everyone involved with such fire raging around them) and an end to the political intrigue and vengeance (which, with the involvement of various kingdoms and sudden deaths of main characters starts to feel like an early version of “Game of Thrones”, though, of course, there’s an entire tradition going way back on all these things) where the film flies its mightiest (though strangely, it was Part I that was the huge international hit… in fact, many countries didn’t even play Part II, the fools just kept Part I going week after week). 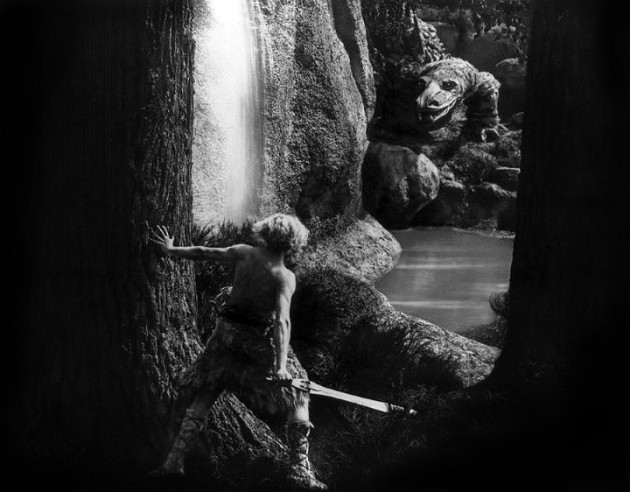 Following on the heels of the profoundly cinematically-inspired nihilistic imagery he conjured up for Mabuse (often leaning towards the expressionistic side, no matter how much the director was said to have dismissed the style), the master Lang again, in his usual ahead-of-its-time understanding of cinematic craft, brings forward, through lots of technique (including dissolves and overlapping photography) a slew of unforgettable imagery in Nibelungen; a particular example is seen in the anxious dream of Kriemhild in which she portends the betrayal and death of the departing-for-battle Siegfried (okay, I let the cat out of the bag) in which his waving form against a small hut slowly transforms into the image of a massive skull – it’s this very kind of conjuring of which cinematic dreams and nightmares are made from. 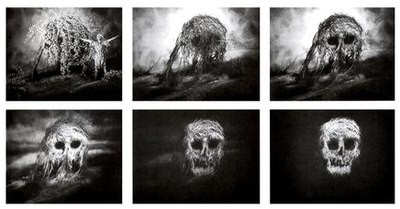 Starting with the film’s opening dedication directly to the German people, it’s interesting to note a surprising underlying nationalism throughout in the film (which culminates with Hagen giving a somewhat troubling speech – especially from today’s perspective, knowing where Germany was soon heading, with the rise of Adolf Hitler and World War II — about the unerring strength of the German people to rise above, even against the odds), especially from a director whose previous Mabuse film was an unflinchingly dark and critical look at the state of chaos of Germany (and the decadent uber-wealthy classes wiling away their nights in seek of pleasure). Apparently Lang, an émigré to Germany (who eventually would escape from the country before the break-out of the war), was trying to bolster the broken spirit of a once-proud country now ripped apart from the catastrophic after-effects of World War I, with most of the population lost in economic dissolution, with little hope for any future. Lang had no idea that the Nazi Party would eventually celebrate the film as an exemplary display of German pride.