A forlorn Death grants a grieving, yet determined woman three chances to bring her fiancé back from the dead. If she can save from a tragic fate even just one young man caught up in an illicit romance in any of the three tales across different continents, she can have her love back… but the clock ticks and the candles of life slowly go out, one by one.

Skipping chronologically just two of Lang’s silent films (as the Destiny blu ray was the next film I could find at the Montreal Public Library – and speaking of that library, on Rue Berri, now that I’ve finally started using it, I have to say, with its massive blu ray and dvd selection including everything from out-of-print Blue Underground titles, to extreme Severin titles, to spaghetti western imports and on to the established classics released by Kino – which Destiny was one – and Criterion, the movie compadre friend who once gushed about it to me is right… they have a fairly overwhelmingly impressive collection of movies to chose from), it was startling (and immensely satisfying) to see Lang go from the two-part Spies, a big budget action adventure aimed at a mass audience, with its relatively pedestrian directing, to – just two years later – something so much more sombre and artistically daring as Destiny. 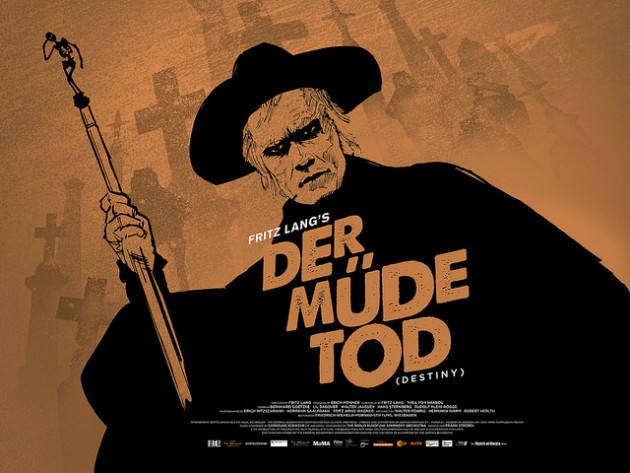 The first film to be made from one of his own scripts (collaborated on with his soon to be wife Thea Von Harbou, who at the time was married to one of Destiny’s stars — and future Dr Mabuse himself – the powerful cinematic presence Rudolf Klein-Rogge), Destiny may not be perfect (though its original German heading alone is one of the most evocative film titles of all time – Der Müde Tod, which translates to “The Weary Death”, which can be read literally within the film’s narrative, or as just a wonderfully existentially despairing view of the world), it’s littered with brilliant cinematic flourishes and a director’s personal vision (nice to know it was a fairly big success at the time too).

The massive, dark room of long burning candles that go on forever, with each representing a life that, once extinguished, means it’s time for Death – who has grown weary of the endless task of bringing sorrow and despair that he has been ‘destined’ by God’s will to perform over and over – to take them away, is a masterful combination of cinematic trickery and stage design.

With the impressively ascendant stairways and massive impenetrable walls the characters navigate and stand before, Lang’s work in Destiny hints at the massively influential German expressionism that Robert Weine’s 1919’s Cabinet of Dr Caligari had brought to the fore (a cinematic style, which Lang however, apparently wasn’t a big fan of, even though he had been attached to direct “Caligari” at one point), though Lang’s Destiny doesn’t rely on overtly distorted sets and strange angles that hint at perverse psychological states, which was so much a part of that style (which is perhaps my favourite in all of cinema). Lang’s production of Destiny is, while still overtly evocative and stylized, subtler than that… yet no less impactful. The moment of Death showing the young female hero the flame of a young baby dying out, who he then takes, is done brilliantly and poignantly through a simple series of dissolves.

The various exotic settings for the three tales of tragic romance (with the leads in all played, in another clever conceit of the film, by the young couple from the beginning, with our female hero unable to ‘save’ her man at the end of any of them – quick aside, in one of them, I was surprised to see more than a glimpse of her bare naked breast, oh my!) are nicely realized (though, again, as with Spies, from the bug-eyed overly emotional dark-skinned moor, to the sinister Middle Eastern and hand-wringing Asian characters, there’s a lot of racist stereotyping going on – sign o’ the times, I guess you’d say), with some bits of broad comic relief in the Chinese Empire segment also playing fairly well (if you can overlook, again, the underlying racism), but it’s the main wraparound story — with our grief-stricken young lover, determined to believe that love can conquer even death, haggling with the cloaked figure himself, who has grown so weary at the constant death, he himself is drawn to her flame of life — where most of the staying power of the film lies. 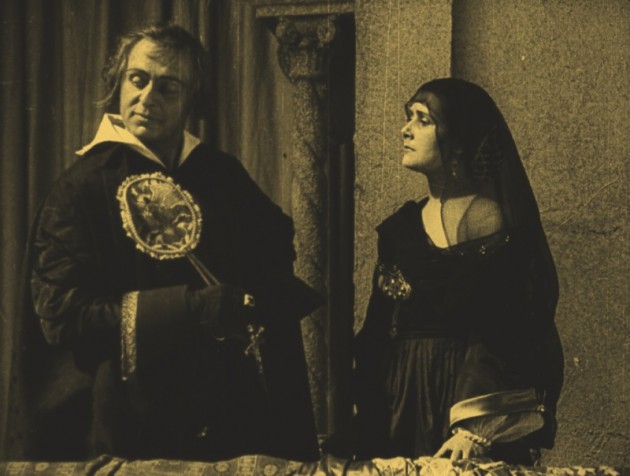 The powerful imposing presences of Klein-Rogge (as a large terrifying figure of authority in each of the three stories) and Goetze as Death are welcome as they do wonders enhancing Lang’s cinematic vision (another thing that was sorely missing from Spies). Lang wisely cast Klein-Rogge as the nefarious “Dr Mabuse” in his next work (and first acknowledged masterpiece), the two-part saga on the mind-controlling doctor lurking in post-war Germany.

I might try and get my hands on the two silent films between Spies and Destiny to see what further glimpses I might be able to gather to explain Lang’s sudden burst of cinematic maturity between the two films. If not, next up is Mabuse, which is what this whole retrospective was supposed to be about in the first place!