Independent trucker Steve Randall (Steve Brodie) doing his best to make an honest life for himself, ends up reluctantly swept up in a robbery in which a cop is killed and he, of course (in proper noir style), is mistakenly fingered. Caught between the mob threatening (in pretty stark detail) the life and limbs of his pregnant wife (Audrey Long) and the police out to get him, Randall and his love get the hell out of dodge… with the forces of darkness (the mob) and – well – lesser darkness (the law) on their tales. 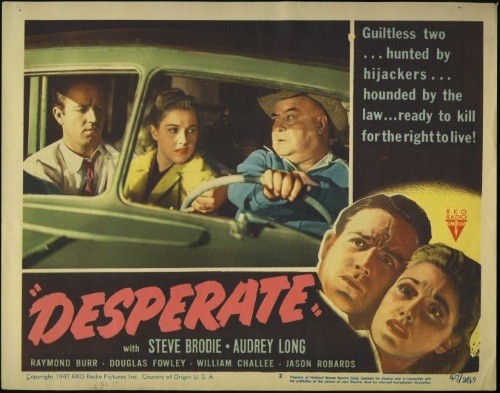 Another one of those tough, no-nonsense (yet still admirably stylish – the scene of a savage basement beating, for instance, under a single swinging overhead light might approach cliché today, but works perfectly within the shifting, dangerous shadow world of characters lurking in the dark) short running time B-noirs directed by that cross-genre stalwart Anthony Mann. While Brodie and Long are decent enough in their roles as the endangered lovers on the run, with the clock literally ticking against them (a device used nicely to ratchet up the tension as the film draws to its conclusion, with the head mob boss behind the initial robbery demanding Randall confess to the murder before the mob boss’ brother is executed at exactly midnight), the real performance highlights revolve around the two representative antagonists on opposite sides of the law; the aforementioned mob boss, played with sociopathic menace by Raymond Burr (long before his two decade run on television, first as lawyer Perry Mason, then the wheel-chair bound detective Ironside) whose tragic flaw is his single soft familial spot for his impulsive brother and the shifty-natured Detective (played by Jason Robards Sr, father of the late, exceedingly great actor with the deeply resonantly voice Jason Robards Jr) who ends up revealed as a kinda good guy at the end, but yet was awfully callous with putting Randall in danger’s way multiple times to ascertain exactly who was guilty of what (providing just another glimpse at the oft suspect and contemptuous view with which film noir held the image of American authority, leading to the counter-creation of the fascistic House of Un-American Activities which went directly after Hollywood as a hotbed of festering communism).