A (far too) long neglected apocalyptic disaster film about a series of natural disasters leading to cataclysmic world-wide catastrophe, Deluge thankfully spends little of its short running time (under 70 minutes) on the melodramatic formulaic character development familiar to this kind of film (that comes later, post-apocalypse), getting things moving right after an ominous opening credits quote from the biblical “Genesis” (not that the film follows through on any further intimations of a Christian wrath of, or any explanations really on, why the whole world goes haywire), rushing headlong into an impressively crafted 10-minute rapid-fire collage of actual footage mixed cleverly with panicked all male scientists and government officials (including the always welcome, regal Edward Van Sloan, of early Universal Dracula and Frankenstein fame, who only sticks around in this pre-New York City destruction phase of the tale) frantically rushing around and reading the teletypes of the massive calamities devouring the world, noting the sudden eclipse of the sun (I have no idea how that would affect anything) and awaiting the terrible tsunami (and earthquake) about to decimate New York City.

And when those inspired forces of nature arrive, about fifteen minutes in, man, does the shit hit the fan. It’s a gloriously realized example of the wonderful use of miniature model cities (and I mean, really impressive ones), as Manhattan first gets hit by the quake (with buildings crumbling down to dust everywhere), followed by the killer waves that flood out the whole city. There’s a really effective recurring gag of cutting into a house or room with some nameless people shrieking as the room crashes in around them, with it all falling away as the ceiling and walls collapse in, to reveal, with a clever transition, the city behind them, the buildings quaking and collapsing from the wrath of nature. 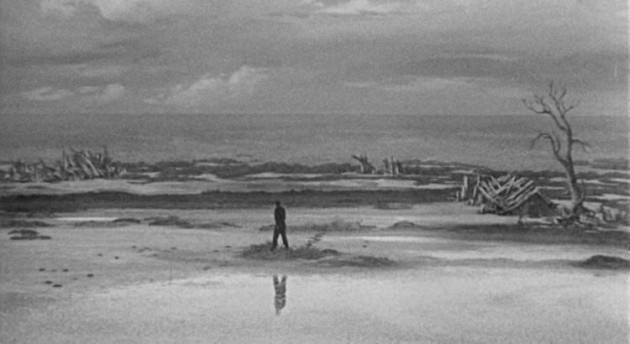 The film doesn’t skimp on the destruction and it’s more than worth it for that alone. On top of that, even when morning arrives and our survivors start picking up the pieces (with alliances and romances forming), the pace remains thankfully rapid. It’s a pre-code movie and is surprisingly up-front with its more lurid subject matter, most of it centering around the ever-present threat of rape from gangs of violent men, happily indulging in their new-found sense of nihilistic freedom (leading to one of our heroes stumbling in the weeds across the tied up and violated corpse of one of their female victims which, even though you only catch a glimpse of her, what you see is disturbing even from today’s context). I’m even quite sure I caught a few glimpses of naked breasts in the scenes of calamity — nothing to write home about (not that I’d ever write home about body part exposure anyway), but still an adult surprise for a film of 1933.

Deluge was clearly meant to be low budget B-picture fare, with its truncated running time and the fact that it starred second-billed performers like Peggy Shannon (who had been prepped at one time to follow silent film legend Clara Bow as the next ‘It girl’, with Shannon eventually unable to handle the inordinately, dehumanizing demands of that studio calling – the same demands that led to Bow’s nervous breakdowns – becoming instead another cautionary Hollywood tale, sinking into a sorrow-filled life of alcoholism and mental illness, eventually to be found dead at the ripe old age of 34 slumped over the kitchen table with a cigarette in her mouth and an empty glass in her hand by her husband, who would follow suit a week later by shooting himself in the head in the same kitchen chair), Sidney Blackmer (a decades-long working stiff actor who will always be remembered ever so fondly by me thirty five years later, with his scrunched-face visage aged yet unmistakeable, exalting the death of God and the long life of Satan to one Rosemary Woodhouse at the birth of her cute little baby with the Devil eyes) and Matt Moore (playing one of the most effeminately ineffective leaders of a group of new citizens I’ve ever seen – you just know they’re doomed if that guy remains in charge), yet it’s no surprise that the film went wildly over-budget. Considering few studios had ever really undertaken a disaster epic on this kind of scale before, on top of that, director Feist apparently turned out to be an uncompromising perfectionist while shooting the apocalyptic destruction material, which turned out good for the movie (and us viewers), but bad for the budget.

There is a painfully anachronistic Stepin Fetchit style racist portrayal of the one black male survivor, who we return to on occasion for some exceedingly inappropriate humor (for instance, while we see the other while males getting their faces shaven to strongly face the new day with a fresh perspective and optimism, our roustabout black man sits on the ground, pining for that lost sofa he used to lie around all day on) that provides an eye-rolling, hard-to-believe-it-was-acceptable reaction, but, other than that, the film is serious enough in its approach. The professional swimmer played by Shannon is a surprisingly strong female character, until the end at least — though it’s really hard to figure out exactly what the ending of the film is implying, with her either swimming away to find her own way (which could be a powerful statement affirming female independence) or she’s actually committing suicide (an amazingly patriarchal perspective confirming her understanding of her lack of value without a man to lead her). 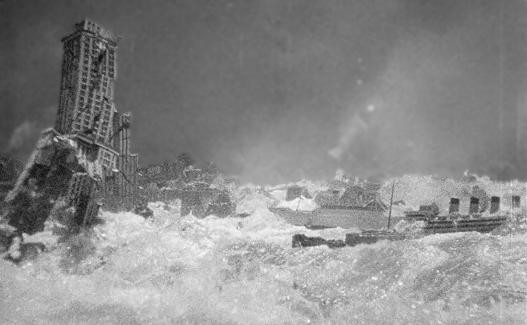 All in all, it’s a more than worthy entry in the disaster film genre. The melodrama so iffy to most of these isn’t half bad, the characters are motivated in interesting ways (though I’ll always wonder what the Blackmer character was smoking when he decided the safest place for his wife and kids during the hurricane was at an outdoor rocky encampment next to the ocean – talk about literalizing ‘killing your family to be free’ fantasies) and the scenes of destruction are, even from today’s perspective, impressively fun, with tons of engaging miniature work. There’s also some nicely stark post-apocalyptic landscapes our characters move across, which I wasn’t sure how much was achieved through matte paintings or sometimes just finding fantastic locations.

Apparently the film didn’t come close to making back it’s budget upon release, so RKO sold the film to a poverty row studio, Republic, with the condition that RKO would suppress the film, as Republic bought it as a cheap way to use the city destruction footage across a series of their own films. This led to the film falling out of circulation for far too long. Glad to see it back in all its entertaining, early nihilistic glory!