“This is a community film. We made it on no money. We made it because we wanted to make it.” Writer, Director David George

Recent years has seen an increase in the popularity of the British gangster film, which draws from a rich tradition that includes gangster standouts such as Performance (Nicolas Roeg, Donald Cammell, 1970), Get Carter (1971, Mike Hodges), and Long Good Friday (1980, John MacKenzie). Some of these recent entries include lock, stock and two smoking barrels (1998, Guy Ritchie), Croupier (1998, Mike Hodges), Snatch (2001, Guy Ritchie), Gangster No. 1 (2000, Paul McGuigan), Sexy Beast (2000, Jonathan Glazer), London to Brighton (2006, Paul Andrew Williams), and In Bruges (2008, Martin McDonagh). You can be sure that none of the above were shot in Ventnor, a sleepy British seaside coastal town on the south coast of the Isle of Wight, or cost as little to make (£2,000) as the recently made British gangster film, Death in Ventnor which, to be accurate, is far lighter in tone than the above films.

The above quote from Writer/Director David George, who also assumes the lead role of ex-con Colin (credited as Lewis George), is reflected in the three groups of characters that make up the narrative dynamic of this engaging little British gangster comedy. The three groups of characters are introduced separately and then come together at the film’s comically violent conclusion. At the heart of this gangster/road movie (which travels the ferry ride distance between the mainland —Southampton I believe— and the town of Ventnor on the Isle of Wight, around Ventnor and back again) is the unlikely buddy coupling of Colin, and his recently released cell-mate (the much younger) Billy (Wayne Child). The comic pairing of droopy Colin and chubby Billy, who wouldn’t look out of place in a kitchen sink realist film, combine to give the film’s the strongest performances. 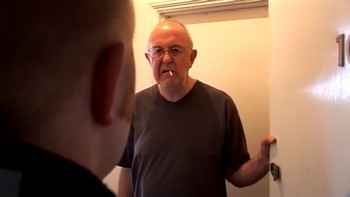 Colin, not too thrilled to see Billy

Sad sack loser Billy is matched in futile incompetence by the equally sad sack loser from the second set of characters, pot-head Gareth (David Priddle), who is in debt to the tune of £4,000 to local gangsters led by a lobster obsessed, amateur painter named Harry (perhaps an homage to the eccentric mob leader from Performance Harry Flowers, played by Johnny Shannon). Harry (Peter Tuson) lives in a small port side cabin decked out in lobster paraphernalia and uses his beloved pet lobster Derrick to intimidate his victims. Harry’s entourage includes a leather-jacketed strong-arm Neil (Graeme Bell) and a sullen, perennially shaded driver Tim (Clive Greedy). The third set of characters is a group of well-meaning social workers who operate a half-way house for juvenile delinquents, the latter of which includes Colin’s pyromaniac teenage son and Neil’s twin daughters. The government social workers are seen in a series of round-table discussions, espousing liberal and idealistic views on juvenile reform so far removed from the reality around them, that their depiction veers on satire. 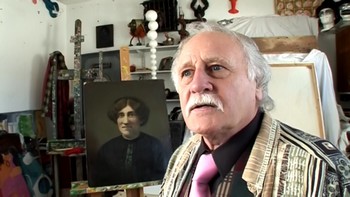 Harry and his ‘Whistler-esque” Mom

Harry gives feeble–minded Gareth one last chance to pay back his loan by setting him up with an easy job: robbing a small Ventnor post office. Unfortunately, Colin and Billy have decided to rob the same post office on the same day, which leads to some funny Ealing Studio styled exchanges between the two groups of thugs and the innocent victims caught in the post office, including the line uttered by a lady trying to add sense to the disorder, (referring to Colin and Billy) “They were here first.” Gareth, wearing a Queen of England mask, gets cold feet at the sight of Colin’s gun and rushes out of the post office. Harry’s men, parked outside waiting for Gareth to exit with the money, intervene and begin their pursuit of Colin, Billy and the loot. The balance of the film traces the chase and culminates in a finale at the half-way home which earns the film its title. As noted earlier, the bungling nature of the criminals, mixed with the regional, quaint British culture, invokes the great Ealing comedies of the 1940s, 1950s (not to suggest that the film is as important as the Ealing classics!).

Director George’s decision to shoot the film entirely on location ends up being one of the film’s strengths, as the picturesque Ventnor coastal views, the ferry and its nearby concrete sprawl, and the touristy side of the Isle of Wight setting add a unique local flavor to the more typical gangster genre conventions. Isle of Wight is of course known for hosting the largest and arguably single most important rock concert ever (vying with Woodstock), The Isle of Wight Festival, in 1970. Director George can’t resist getting in a reference to Isle of Wight’s famous rock history past with a funny little scene where Billy picks up an aging hippie hitchhiker (a dead ringer for Keith Richards) who tells Billy, “I’ve been here since the festival.” In the end, Death in Ventnor does not eclipse any of the earlier mentioned British gangster films, but is a film with a true independent spirit that shines through every pore of its digital fiber. It moves at a nice clip, is well-written and well shot and entertains throughout its 80 minute running time. 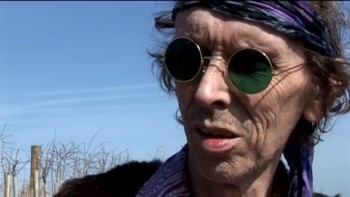 Rock and Roll anyone?