Officer Lacy (Don Murray), an 18-year-vet of the force with some seriously violent tendencies (having led him no further up the ranks then beat cop) is celebrated as a symbol of heroism after shooting dead a hoodlum hostage-taker by the local right-wing politician running for Mayor of New York under the platform of ‘taking the streets back’… only the woman he ‘saved’ (Diahn Williams) has decided to change her story and reveal that Lacy killed the black man in cold blood after he had already surrendered… and Lacy is getting very angry about her decision.

Perhaps it was my cursory glance at the poster art, along with the fact that the film itself has languished in obscurity, that made me think I was settling into my seat in the darkened room for one of those testosterone-driven, right-wing fantasies of a cop on a righteous rampage through the violent urban streets that became so popular in the 80’s (which certainly would have come with its own pleasures), only to discover how wrong I was. Deadly Hero is an exceedingly well-directed, gritty and complex view of urban race relations and tensions. At best, it’s as evocative at creating a milieu of corrupt cops (and those doing their best to fight it), opportunistic politicians, clueless rich city folk doing their utmost to appear hip to the times (including attending with straight faces some of the worst, most shallow looking naked hippy song and dance performances to live classic music ever captured on film) and the clash between economic classes that happens on its streets every day, as anything by that American filmmaker who crafted such a notable career displaying that very turbulent world, Sidney Lumet (even some of the shots, with the camera tracking across the televisions of the politician before reaching the arriving desperate Officer Lacy, are reminiscent, in the expansiveness of the canvas, of Lumet).

The opening act of the film introduces the various characters, with initially only cursory attention placed on the seethingly uptight Lacy (and his partner, a very young Treat Williams, who, while never quite reaching the heights of stardom he was prepped for, eventually would have his own urban Lumet moment just six years later, as a Serpico-style cop in Prince of the City) and more care placed on the powerful looking black man (James Earl Jones) stalking a female music conductor (hence, the awful performance art). When the actual scary kidnapping occurs, with its hints of rape (including some lurid actions by the Jones character, like moving his sharp knife lingeringly along her breast, that at the time were daring displays of breaking down censorship barriers but today would assuredly be met with charges of sexism) and the Jones character revealing his intellectual prowess along with his cold hatred is the moment the film spins into less Lumet and more the anarchic intellectual verve of Larry Cohen, indulging around the same playground as that of the independent maverick’s Blaxploitation classic Bone. 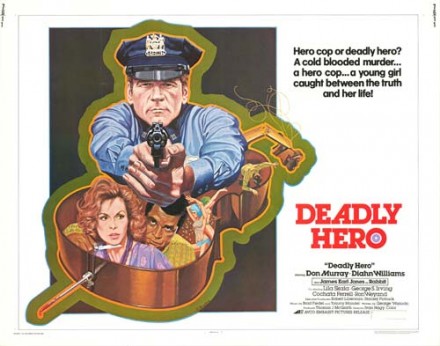 The first third ends with a surprise I didn’t see coming (one of the benefits of really knowing nothing about the film), spinning us into the rest of the narrative, which remains fascinating to the end, as we watch the Willliams’ character morally struggle between being grateful the cops showed up to save her and conflicted at having lied about what happened, while Murray’s cop grows more unhinged at the possibility of his entire career (and image of himself as a protector of justice) crumbling before his eyes.

I don’t know much about the director Nagy (other than he apparently had some involvement in the infamous Heidi Fleiss “Hollywood Madam” prostitution scandal in the 90’s), but, along with the overall tight and effective directing, the film certainly has a great eye for locations, including a really nice mud-strewn one by the bay where Lacy meets up with the hit man (played by Zero Mostel’s son!) he eventually hires to take out the Williams’ snitch.

While I wouldn’t call it a great film (the inclusion of that naked hippie stuff, yeesh – and there is some awkwardness in a few scenes, such as the luring of someone out to get murdered, as well as the freeze frame ending, which is nowhere near as ambiguous or daring as it wants to be), it was definitely a wonderful discovery to see; another example of a deserving film having fallen through the cracks somehow. Perhaps a reason is, similar to the also under-appreciated yet equally worthy urban cop movie Report to the Commissioner from the same year, it didn’t have the splash of major stars of the day to carry it. No Pacino or De Niro to headline. It’s too bad, as this should have been a star-making performance for Murray (a long-time character actor I’ve always admired – and he’s still working at 88, playing an important role in David Lynch’s new Twin Peaks season!). He’s brilliant in the role, managing to create an empathetic humanity to a pretty despicable character. I can only imagine the disappointment he must have felt, along with everyone else involved, at the movie sinking like a stone upon its release.