Man, does the story jump right in, with he who we will soon come to know as ‘Rip’ Murdock (with the film chock full of these kind of hard-boiled names, ones that reinforce the self-aware deliberate constructs of the genre, operating with a kind of sublime perfection, yet now easy to spoof – including that of the femme de la femme fatale herself, Coral Chandler, with her last name referencing the greatest of pulp crime novelists whose work is draped all over these films noir), with that its played by Humphrey Bogart giving us all we need to pull us in further, hurrying through the dark and dangerous urban city street to avoid the coppers on his tale, ending up hiding in the shadows of a cathedral-sized church during a procession (slowing down briefly to capture a series of nicely crafted shots, contrasting peaceful sanctity with sweaty desperation), where our man gets the attention of the only kind of padre this Murdock-on-the-run can trust – namely, a fellow ex-paratrooper just out of the war (a cameo by James Bell, long-time character actor and familiar face to any long-time acolytes, such as moi, of the 1940’s RKO suggestive-horror films of Val Lewton), to recount the tale of woe that brought him here, on the lam, which then sends the film into a long flashback that lasts right on up to the end of the second act (at which point Bogart’s Murdock rushes out of the cathedral, with Bell’s padre never mentioned again, his presence as a flashback-enabling ‘listener’ just one of the many conceits that reveals itself as perhaps bit too unnecessarily complicated for its own good). 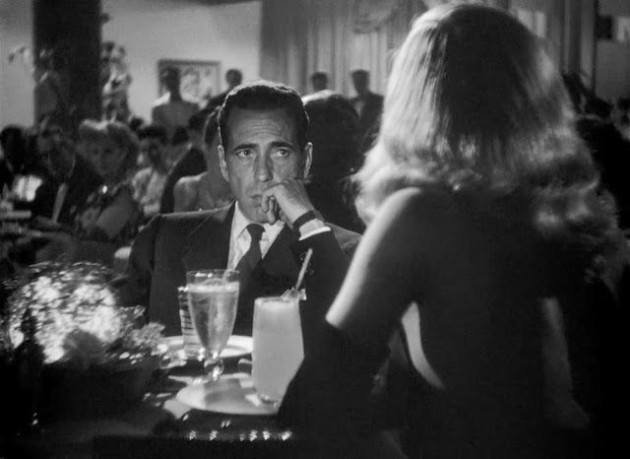 In the meantime, though, the move into the flashback keeps it all going at a nice pace, including the introduction of the major story twist (of an eventually overly convoluted film) that propels the narrative; namely, Murdock making not only the unsettling discovery that his best war buddy, and fellow fighting hero, Sgt Johnny Drake (William Prince) has inexplicably run out rather than take part in their dual official medal-award celebrations (with the final shot of the escaping Drake at the door from the car of the departing train, wearing a final sardonic smile and with a salute to the helpless and confused Murdock left standing on the tracks, being one that grows in poignancy the more the film unfolds), but, he quickly learns, that this trench-sharing best friend he thought he had grown to know so well didn’t actually exist at all – Drake had joined the army under an assumed name to escape from a murder rap hanging over his head (with this stark portrait of moral murkiness swimming beneath the house-of-cards image of nobility and heroism post-war America was selling at the time being just the kind of bold critique – especially prevalent in the dark worlds defined by corruption and compromise making up our beloved films noir – that would lead to the communist-scare House of Un-American Activities Committee in the 1950’s, a reaction by the political establishment to destroy and/or intimidate into submission those unruly Hollywood upstarts with their rebellious natures. I mean, the elite had to regain control of the American narrative somehow!).

Things settle into familiar, if still satisfying territory, with Murdock – in his attempt to uncover who murdered Drake just days after his escape (as we assume that’s who that fresh corpse burned beyond recognition in the morgue is, though it’s never outright identified as such, rather Murdock is just certain – another one of the deliberately not-fully-clear story elements that the film keeps building on to an eventually confusing level) and on the trail to find the mysterious letter left for him by his now dead pal (or who he thought was his pal) – leading to him falling in with the blackmail-heavy, secrets- and guilt-ridden, high-stakes milieu of gangsters — led by the powerful mob figure running dubious rackets out of his high-end nightclub with the mob name that just rolls off the tongue, Martinelli (Morris Carnovsky), his sociopathic lumbering henchman Krause (Marvin Miller) at his side – and molls — a femme fatale seductress in the most traditional sense (and I mean that in a good way), whose position between innocence and guilt might keep moving back and forth, but remains rock solid as for as hot desirability, Scott’s aforementioned Coral Chandler – and tough no-nonsense cops – with this one possibly playing both sides, Charles Cane’s Lieutenant Kincaid (I did mention about these character names, right?).

As with so many of these films during this great time in tinsel town, the dialogue crackles, delivered with precision by the performers (with well-chosen players from each studio-owned acting cabal one of the staples of the era), especially Bogart, who relishes his lines with such confident swagger that we can almost ignore how it doesn’t quite ring true that this character, who in voiceover tells us how he was a simple taxi cab owner in St Louis before the war, is able to so easily enter and saunter about the dark world of crime and murder – dispatching rapid-fire, cynical quips and jabs without any hesitation, such as referring to the morgue as ‘the meat locker’ where he goes to identify his dead pal, or when tangling with Scott’s sultriest of fatales – as if he’s been doing it all his life. Bogart may play the role too much like one of his cynical private dicks, rather than the nuanced character that would have made more sense, moving from innocence to world weary… but… eh. It’s still fun to see Bogart delivering the goods.

As far as Scott, she’s the most fascinating of physical creatures, a slightly masculinized, even smokier-voiced doppelgänger of Bogart’s real-life long-time lady Lauren Bacall (with the filmmakers clearly aware of this, going so far as to, in one scene, dress her up in Bacall’s famous beret and long-coat), with her even sharper, unique features (and oddly flat-faced profile) hinting at something even more dangerous and sexually adventurous than Bacall; and one with a more mature gravitas. Yet all Scott’s uniqueness (and, admittedly, lesser acting chops) – as well as perhaps not being attached to a famous male actor like Bogie at the time — might have been the reason she never reached the heights of fame of some of her peers on similar trajectories at the time, like Bacall, or the great Barbara Stanwyck. 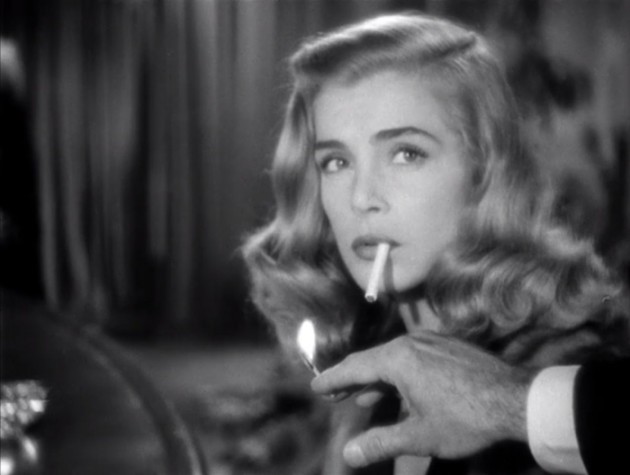 As satisfying as a lot of the element in the film are, however, it does get convoluted with unnecessarily complex story elements that simply don’t add up (Why would Martinelli have even bothered to keep the gun to blackmail Chandler? Why does she need to go to the club to pretend to lose at gambling every month to pay the blackmail money rather than just pay it out to him? Why does she allow Murdoch to get so far as to sneak into Martinell’s house then brain him only once inside? Why? Why??). While this kind of narrative complexity isn’t unfamiliar to the genre, sometimes the film gets away with it (as they say, I dare anyone to figure out what the hell is going on in Howard Hawk’s much-celebrated classic LA-set noir The Big Sleep, starring none-other-than Bogart and Bacall and based upon a story by that author with the familiar last name, Raymond Chandler) – hiding all those confusing MacGuffins and details-that-don’t-add up behind grand noir storytelling that sweeps you along — and sometimes it doesn’t; Dead Reckoning doesn’t. Not quite anyway; it’s worst failing however? For a film clearly meant to head us down that familiar, yet deeply pleasing, path towards bleak noir tragedy, with our hero driven inexorably by deep desire and lust, even though he knows (as he even tells us in his first-person narrative) it’s the clear road to doom, instead “Reckoning” concludes in far too clean (studio-approved, I’m sure) fashion, with the good guy’s gunshot wound (and emotional state) healing just fine, and our bad guys (and gals — hint, hint) getting their just deserts. It’s such an easy wrap-up, it feels tacked on, without conviction and lacking resonance. Somebody shoulda told ‘em – you wanna make a classic? Just look over at Jacques Tourneur’s quintessential, ever-celebrated Out of the Past from that same year. The noir lesson is obvious; he who enters, never escapes unscathed. In fact, I would go so far as to say; with a proper bleak ending, no one would even bother themselves with all the stuff that doesn’t make sense. 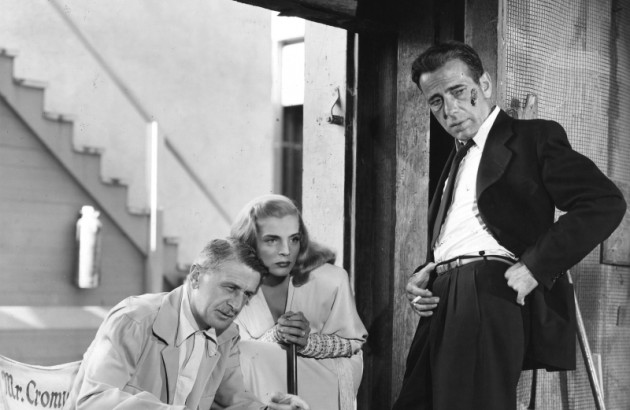 A little aside, there’s a fascinating moment where Bogart’s Murdock delivers this revealing – of Hollywood and its male-led elite — description to Chandler of his idea of the perfect relationship with a woman – namely, her as a toy-sized beauty he can carry around in his pocket, unseen and unheard, to pull out when needed, expanding immediately to life-size, in the service of looking good next to him, like at high-end parties. While Scott’s Chandler dismisses his talk immediately as masculine anxiety (can anyone imagine a male lead getting away with that perspective in a film today, let alone a Hollywood actor agreeing to take the role?), what’s even more interesting is having heard Bacall in interview recounting her great love, Bogart himself (with him 25 years her senior, first starting to date when she was 19), using those exact words to describe how he wished their relationship could be.